Works by 3 members of the Orpen family for Auction at Whyte’s. 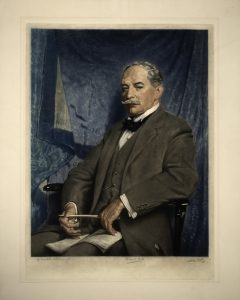 Lord Dewar paid Sir William Orpen £1500 for the original painting which was exhibited at the Royal Academy Summer Exhibition, in 1925.

Thomas Robert “Tommy” Dewar, 1st Baron Dewar (6 January 1864-11 April 1930) was a Scottish whisky distiller who, along with his brother John Dewar, built their family label, Dewar’s, into an international success. He was born in 1864 in Perth, Scotland. The son of John Dewar, Sr., he was exposed at a very young age to the spirit industry in Scotland as his father founded John Dewar & Sons, Ltd. He earned his education in Perth, as well as in Edinburgh, and he soon realised that farming was not his calling. After his father’s death, he worked with his brother John to continue and grow their family’s brand. Gifted with charisma, Dewar was able to expand his father’s business on a global scale.

Lord Dewar became involved in Thoroughbred horse racing as an owner and breeder. His stud at Homestall is best known for two significant horses: Challenger and Cameronian. Challenger foaled 1927, whom Dewar bred and raced at age two but who then was sold to American interests after his death. The stallion went on to become the Leading sire in North America in 1939. Bred by Dewar and foaled in 1928, Cameronian won the 1931 Epsom Derby and 2,000 Guineas Stakes.

Dewar was knighted in 1902, created a baronet, of Homestall Manor in the Parish of East Grinstead in the County of East Sussex, in 1917, and raised to the peerage as Baron Dewar, of Homestall in the County of Sussex, in 1919. However, as he never married the baronetcy and barony became extinct on his death, at Homestall, in April 1930, aged sixty-six, following which he was cremated at Golders Green Crematorium. 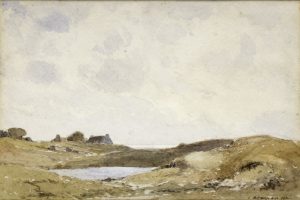 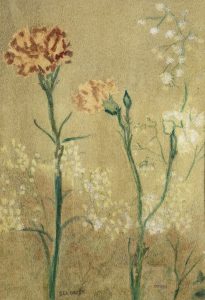 Beatrice Orpen was an Irish landscape painter and teacher. She was the daughter of William Orpen’s brother Charles St George Orpen (1864–1939). Born in Carrickmines, Co. Dublin, she aided in the establishment of the Drogheda Municipal Gallery of Art – The Highlanes.