Unlike Antonio Pollaiuolo, Leonardo da Vinci and Michelangelo, William Orpen did not need to witness the skinning of dead bodies to study the human anatomy.  He was initially influenced by a teacher at The Slade Art School – Henry Tonks, who was a surgeon and artist. Tonks also taught Orpen’s youngest daughter Diana (Dickie) and I will include some of her anatomical drawings further on.

Some of these drawings are part of the sixty sheets of anatomical drawings that were catalogued as part of William Orpen’s estate at the time of his death in 1931. For the purposes of the probate selling valuation the drawings, described as “60 Anatomical drawings (chalk on black paper)”, were given a value of just £2 in 1932. However, it appears that the drawings were never sold, and so reverted to the family, 20 of which were acquired by the Tate.

Orpen took to teaching in London in late 1903, when he founded the Chelsea Art School in the Rossetti Studios in Flood Street along with fellow Slade School artist Augustus John and Jack Knewstub (Orpen’s brother-in-law). There were two studios, one for girls and one for boys (still used today by art students).

However, in 1902 Orpen had already begun to teach at the Metropolitan School of Art in Dublin for short periods of two or three times a year. In both schools, he is known to have lectured on anatomy. The Chelsea Art School enterprise was short-lived having passed into other hands by the close of 1905, largely due to a lack of interest from Augustus John who was famous for his ‘couldn’t care less’ attitude. Orpen continued to teach at the Metropolitan in Dublin until the outbreak of the First World War in 1914. It is therefore likely that the drawings date to somewhere within that twelve-year period 1902-1914. Most of the drawings are chalk on black sugar paper measuring between 40 and 50 inches in height.

In an illustrated letter written by Orpen to his wife, dating to about 1908, he gives an indication to the possible source for some of his drawings. In the sketch below (image 1), taken from that letter, we see the artist cribbing from a book on the desk doing his best “to do his duty”. 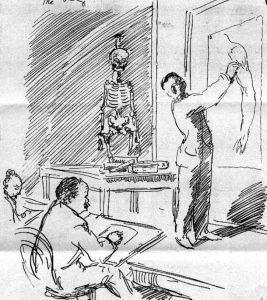 However, having misplaced his Gray’s Anatomy, the anatomical bible, which he describes as “the only book worth working from”, he must make do. It is therefore entirely possible that he based at least some of his dissection drawings from the figures in Gray’s Anatomy (image 2) modifying and simplifying as necessary to illustrate a point in the lecture. 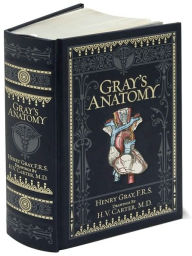 As Orpen was lecturing on Anatomy for Artists, he would have approached the subject somewhat differently from that which one would expect for medical students. This difference is exemplified in the beauty of these drawings, by giving them a dimension in many cases that transcends the merely clinical.

Compare for instance, these two drawings of the skull and cranium. Almost certainly Orpen has “lifted” his drawings directly from these figures taken from Gray’s Anatomy. 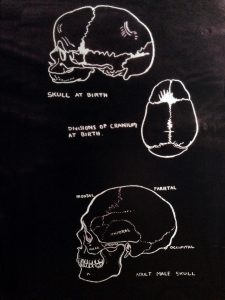 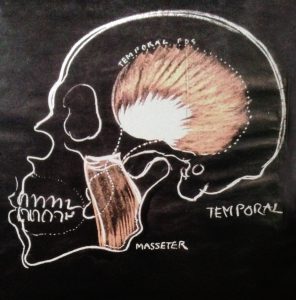 Marked: “CD”: Outline of the skull in white highlighting the Masseter and Temporal muscles in coloured chalks.

Image 5 – Gray’s Anatomy: Muscles of the Back of the Leg. 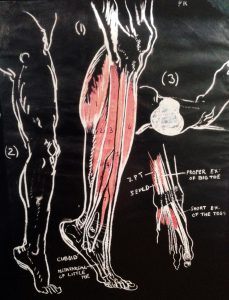 Drawing of male – lower head back of neck, torso, upper legs and calves viewed from the side, outline in white, facing right, body twisting left highlighting right side and back muscles outer thigh muscles in right leg and inner left thigh. The right arm is extended. The right calf is lifted behind and the left knee is bent. Muscles are highlighted in coloured and white chalks. Numbers entered at various points indicating muscles but there is no key.

The work is after a figure in Michelangelo’s  “Battle of Cascina”, and is probably based on a study nude drawing for that picture. Orpen has obviously used this study as an example to demonstrate the underlying muscles, a knowledge and understanding of which, is a highly desirable aid to successful figure drawing.

Many if not all of Orpen’s drawings in this collection are based on actual works of art, in which Orpen has stripped away the flesh to reveal how the muscles below give rise to the figure being represented. One of these original works has been identified as a study for one of the figures in Michelangelo’s ‘Battle of Cascina’, 1504. 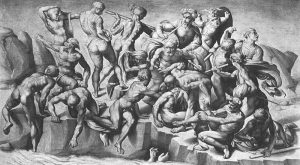 William Orpen’s daughter Diana Orpen (1914- 2008) also studied art at The Slade and under the guidance of her fathers teacher Professor Henry Tonks she too became an expert on anatomical drawing. She produced over 2500 surgical studies during WW2 at the Plastic and Maxillo-Facial Unit at Hill End, St Albans. The British Association of Plastic, Reconstructive and Aesthetic Surgeons holds a collection of her drawings from the period 1942-45. Diana, in the 1970’s was again involved with illustrating reconstructive surgery. 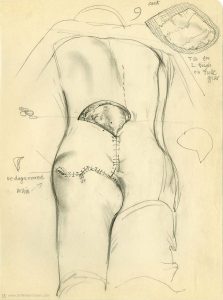 Two drawings of Back surgery by Diana Orpen. 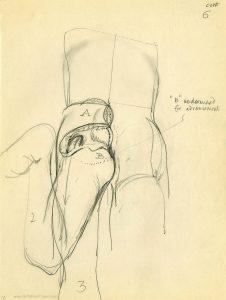