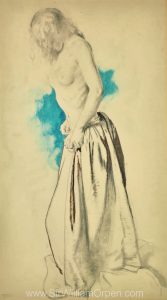 Following text by Professor Kenneth McConkey –
When in the spring of 1916 Orpen delivered Nude Pattern: The Holy Well to the New English Art Club, it was the most ambitious of three canvases which have become known as the ‘Irish Trilogy’. Tackling the subject of peasant piety, it was also an envoi to the Celtic Revival Ireland of Orpen’s youth. Executed in ‘marble medium’, and designed as an allegory in which Aran Island fisher-folk ritually bathe in the sacred waters of a holy well, it would echo the great solemn fresco cycles of revered Renaissance masters. As a student Orpen would have studied the iconic Piero della Francescas in the National Gallery, London, and marveled at the daring naturalism of the man removing his shirt in The Baptism of Christ.
When shown, the painting was immediately purchased by Orpen’s lover, Mrs Evelyn St George, to hang at her London residence, Cam House, Campden Hill, W.8. P.G. Konody tells us that this tall, commanding client acquired seventeen ‘finished’ or ‘stand-alone’ studies of the principal figures in the picture, not all of which have come to light in recent years (Sir William Orpen, Artist and Man, 1932, p.169). All, as here, are touched with watercolour. It is unclear if they were produced prior to the painting, or after its completion, but they undoubtedly demonstrate Orpen’s ability as a master draughtsman to create interesting figure groups within a complex composition. Around this figure, others appear in attitudes of adulation – some kneeling in prayer, some bathing, others hailing the shrine and its Dominican keeper. This same model is likely to have posed for other figures in the composition, as did her male companion, the painter, Séan Keating.
In the present instance she draws in her abdomen to remove her clothing in the cool sunlight. She looks down as she does so. Presently she will be naked before her maker. When, after Orpen’s death, Konody had access to his sketchbooks, he marveled at the artist’s facility with ‘the intricacies of the human structure, the interplay of bony and fleshy forms, the suggestion of actual and of potential movement, the whole articulation of the human mechanism’ (The Studio, December 1932, p. 310). This, as much as the drapery that falls to her feet, characterises Orpen’s Study for ‘Nude Pattern: The Holy Well’.

(2) Mr and Mrs Jack Courtauld and their daughter Jeanne on a settee. 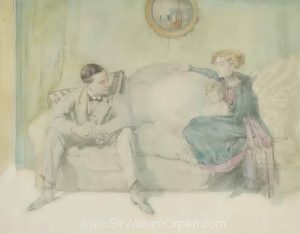 Acting on behalf of the Artist’s estate upon Orpen’s death, M. Knoedler & Co. wrote a letter concerning the present work to Mr Jack Courtauld on 3 October 1932:

‘We have at our galleries here all the paintings and drawings which were in Sir William’s studio at the time of his death.

Many or these are for sale, including a drawing in pencil and colour of yourself and Mrs. Courtauld, on a settee, with your small child, and we thought perhaps you might be interested to see, and possibly acquire, this picture. If you care to look at it we shall be pleased to show it to you any time, together with the other Orpen pictures we have here.’

Although there is no record of the sale taking place, it did indeed end up in the family where it has since remained. Major John (Jack) Sewell Courtauld (1880-1942) was the son of Sydney Courtauld (1840-1899) and brother of Samuel Courtauld, founder of the Courtauld Institute of Art, and Stephen Courtauld, who lived and commissioned the striking modernist interiors of Eltham Palace. Jack married Henrietta Barbara Holland in 1906. They are depicted here with their daughter Jeanne, who was born in 1909 and therefore dates the present work to circa 1913-14, just prior to the First World War. Jack saw active service and was awarded the Military Cross (as was his brother Stephen). He owned a company of architects, but at the 1924 general election he was elected as Member of Parliament for the constituency of Chichester, where he served as MP until his death in 1942, aged 62.

It is likely that the current work, with its tell-tale furniture and fittings, was executed at Oriel, Orpen’s studio in South Bolton Gardens. Of specific note is the round convex mirror, a characteristic of so many of his interiors, along with the settee and zebra-striped cushions, which sometimes can also be seen in works of the period from about 1910 to about 1914, such as Alfred Rich and Model (Tate Gallery) and The Poet (private collection). What is more, Orpen, who indulged in many famous self-portraits, gives us a tantalizing glimpse of himself as his easel, reflected in the mirror.