Jean-Emile Laboureur (born Nantes 1877, died Pénestin 1943) painter, engraver and illustrator. At the age of 18 he studied at the Académie Julian. His mentor, industrialist and art collector Lotz-Brissoneau, introduced him to print-maker Auguste Lepère, who taught him wood engraving. He traveled extensively in Europe the US and Canada. He met and was inspired by Toulouse-Lautrec.

“Shortly afterwards I went to live in St. Pol, a dirty little town, but full of character. The hotel was filthy and the food impossible. We ate tinned tongue and bully-beef for the most part. Here I met Laboureur, a Frenchman, who was acting as interpreter – a very good artist. I think his etchings are as good as any line of work the war has produced. A most amusing man. We had many happy dinners together at a little restaurant, where the old lady used to give us her bedroom as a private sitting-room, dining-room. It was a bit stuffy, but the food was eatable”.

Judging from the following two images, Orpen was clearly influenced by Laboureur. 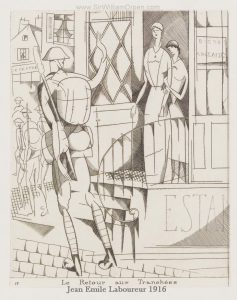 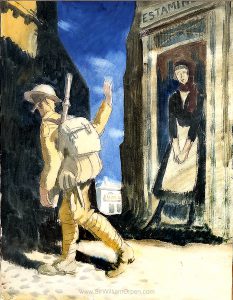 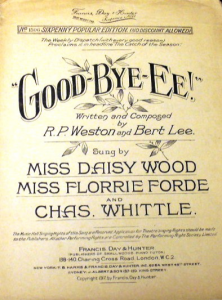