William Martin Murphy was the founder of the Independent Newspapers and this portrait was presented to him by his newspaper employees.

A copy of Orpen’s painting hangs in the offices of the Dublin Chamber of Commerce with the chain of office added, it was painted by Margaret Crilly (she married fellow art student Harry Clarke). 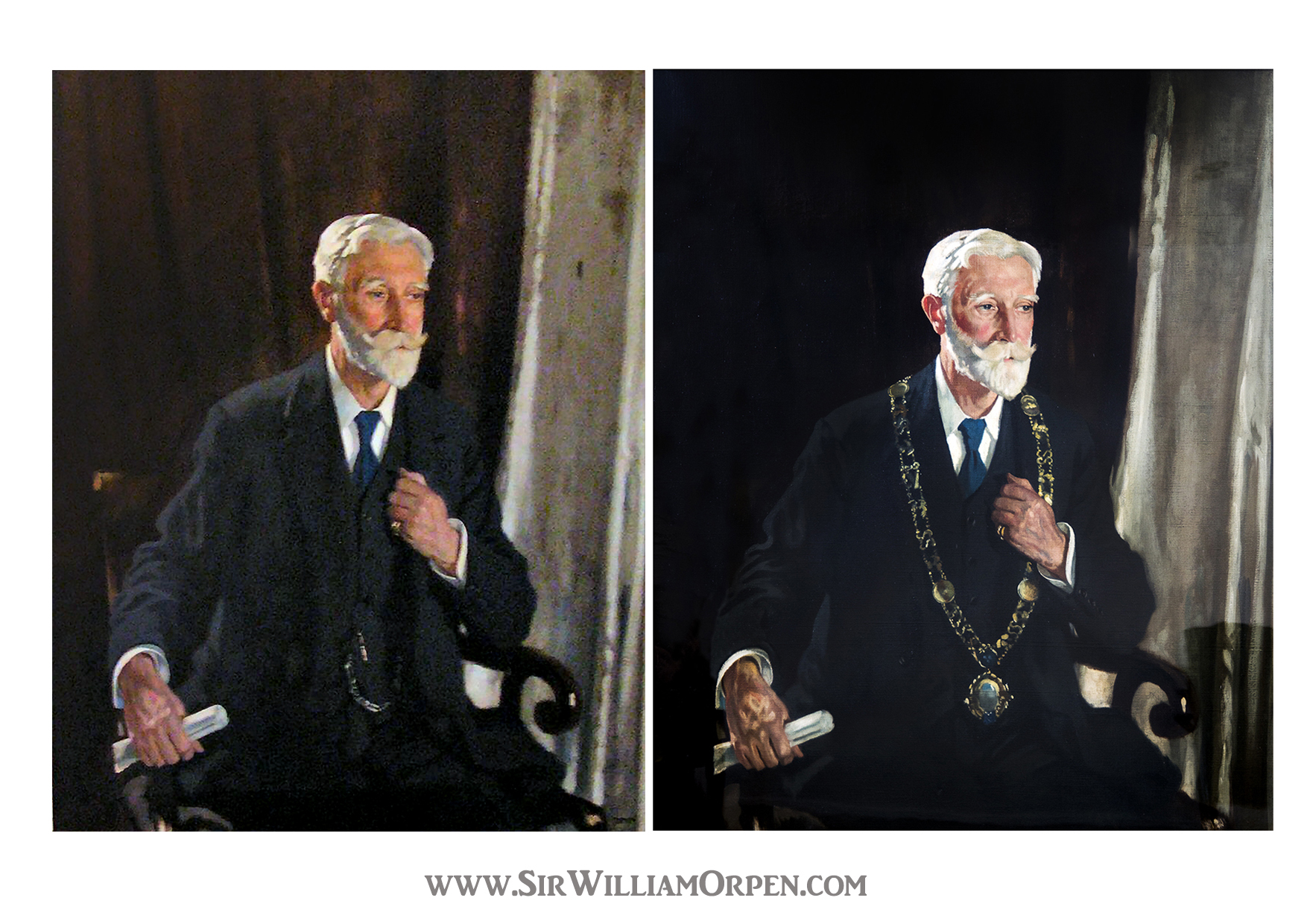 William Martin Murphy from Derrymihin West, near Castletownbere in West Cork, was famous for building Tramways and Railways in Ireland, UK, Argentina and West Africa. An MP for St Patrick’s division, Dublin (1885 – 1892). He studied at Belvedere College, Dublin from 1858 to 1863.

Murphy was heavily involved in the Irish newspaper industry (The Nation which subsequently became the Independent newspaper), Clerys Department Store and the Imperial Hotel. He built churches, schools and bridges.  He served as leader of the Employers Federation, President of the Society of St Vincent de Paul and President of the Dublin Chamber of Commerce to which he presented the chain of office below. 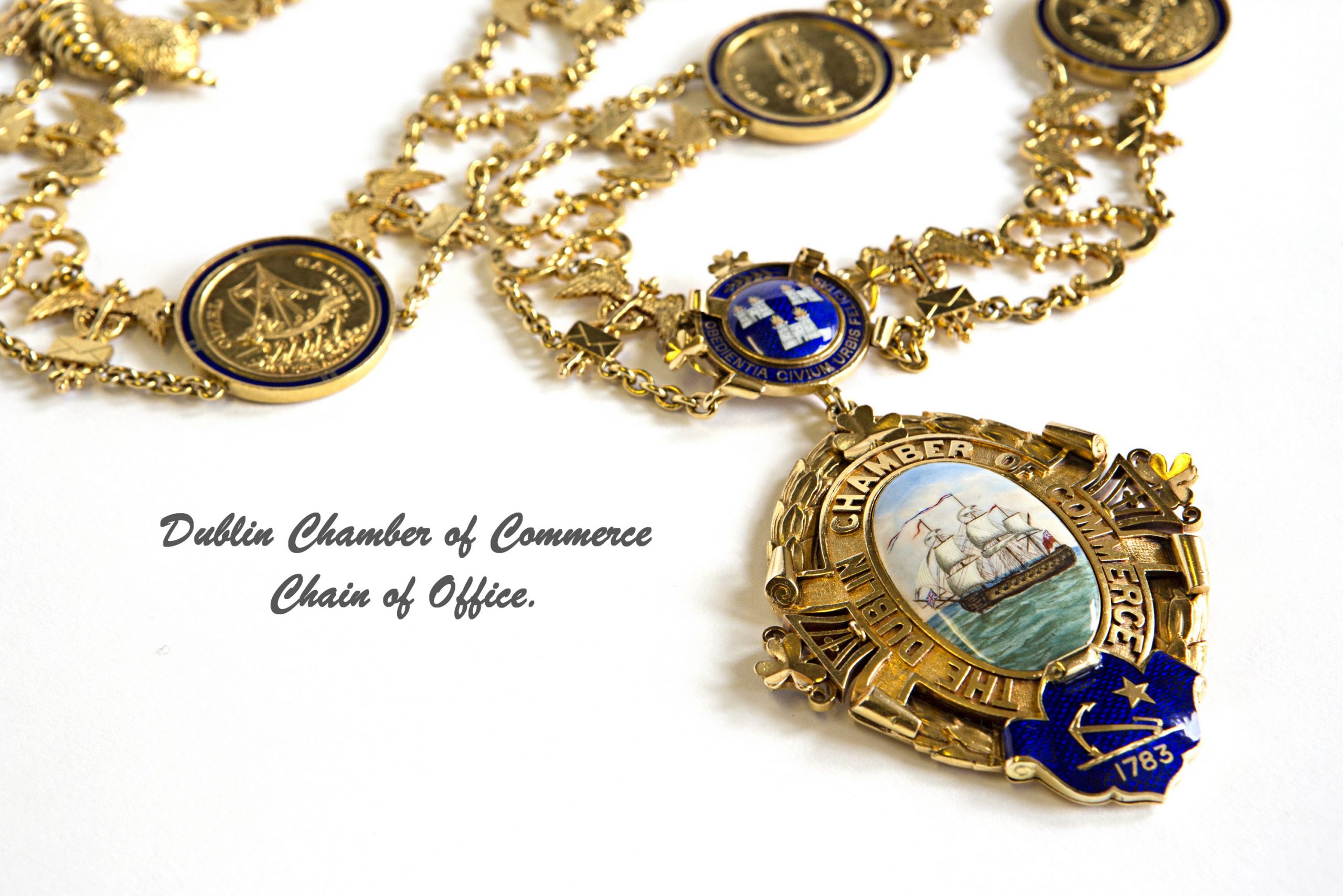 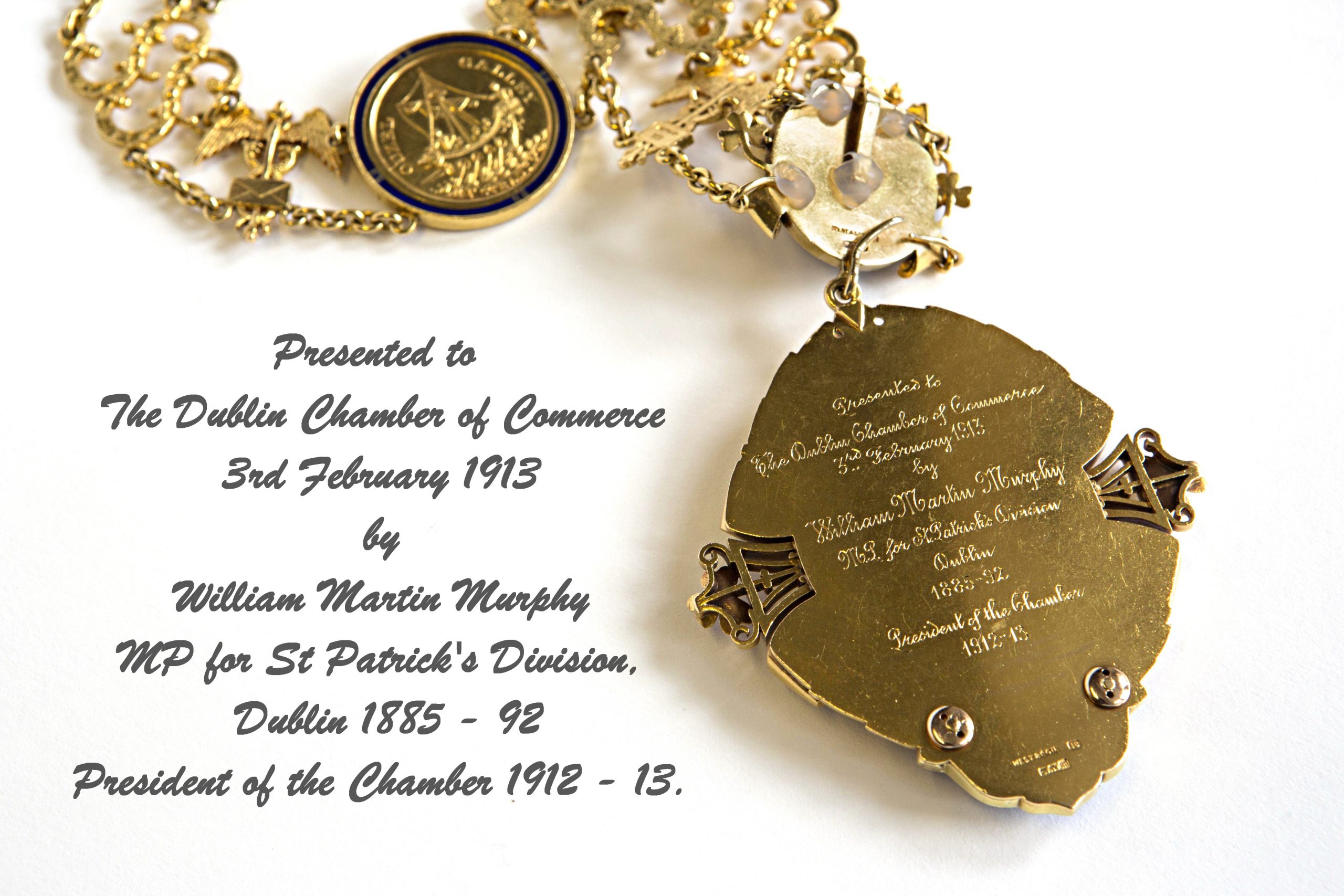 Dublin Chamber of Commerce. Pictures of the chain of office by Conor McCabe Photography.

Murphy refused a Knighthood from King Edward VII in 1907 and that same year was the first President of Milltown Golf Club, Dublin where there is still an annual competition for the William Martin Murphy Cup.

He is probably equally famous for his role in the ‘Dublin Lockout’ which was over his dispute with James Larkin’s attempt to unionise workers and the formation of the ITGWU. Murphy had dismissed over 300 workers he suspected of Union membership. The Lockout lasted from 26 August 1913 to 18 January 1914 and ultimately failed when the workers returned to their jobs.

William Orpen was an admirer of James Larkin and depicts himself with Larkin at Liberty Hall’s Soup Kitchen. The letters/sketches were to his neighbours in Chelsea – Mr & Mrs Legge.

My Dear Mrs Legge – “Thank you for your letter – Mrs McCalmont sent me £5 this morning – it was good of her – will you thank her for me – I don’t know her address – the good man above (Larkin) is up for his trial today and will most probably get 6 months hard labour- it doesn’t seem right – do it. My love to Robin.

Transcript: – Liberty Hall – “My Dear Robin Legge, Here I am at Liberty Hall – dealing out soup to the starved of Dublin – If you meet any with money to spare – yes I got Miss Olive Ryan cheque – you follow suit and send me 10 Shillings to the funds in payment for this and another I intend doing for you if I can keep sober – it’s these disturbing sights and times that drives one to the bottle. Thanks for your letter.

William Martin Murphy was opposed to Hugh Lane’s plan to build an art gallery across the River Liffey. Orpen was one of many supporters of the project. 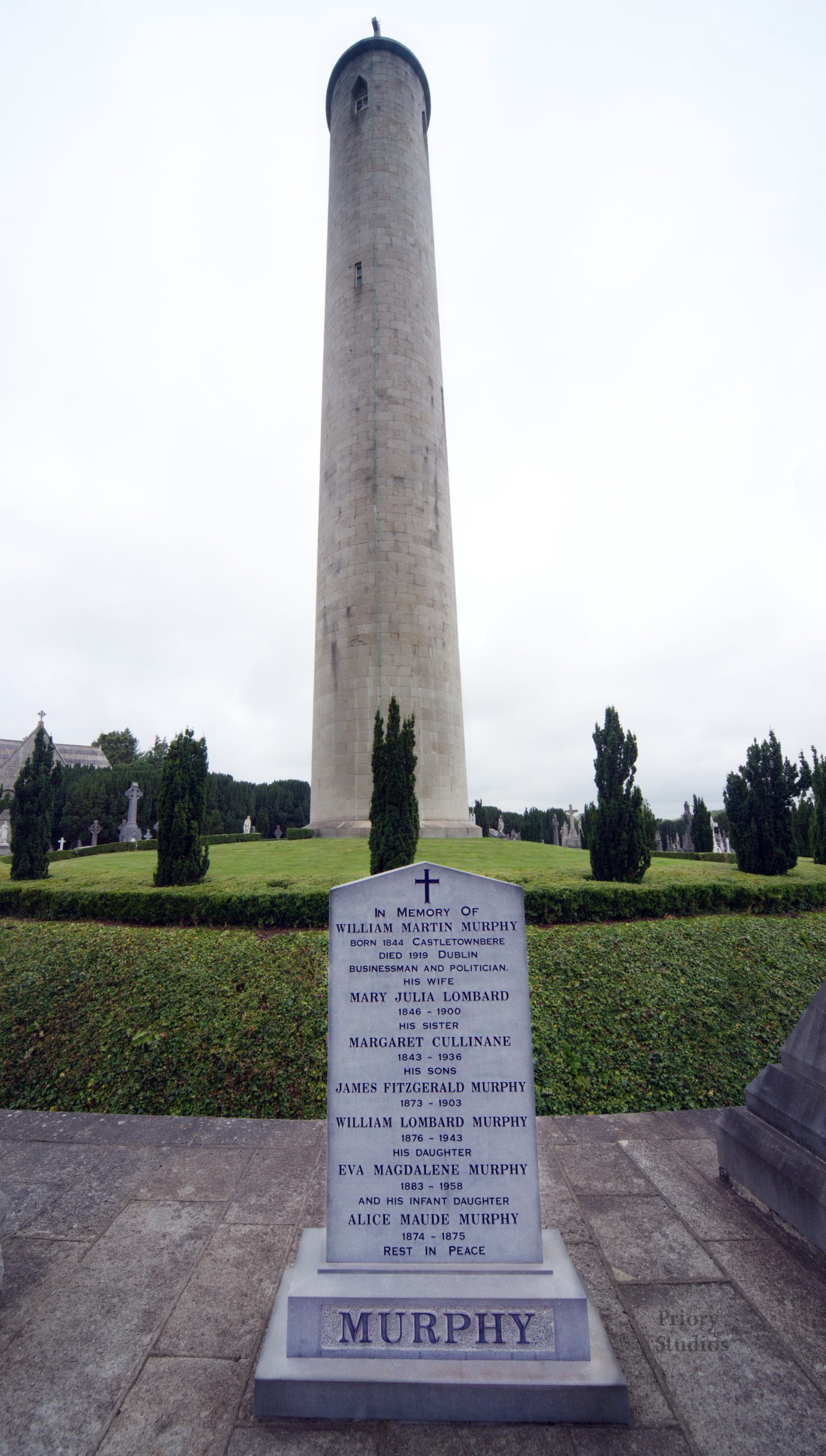 The Murphy family headstone which is just above the Tomb. 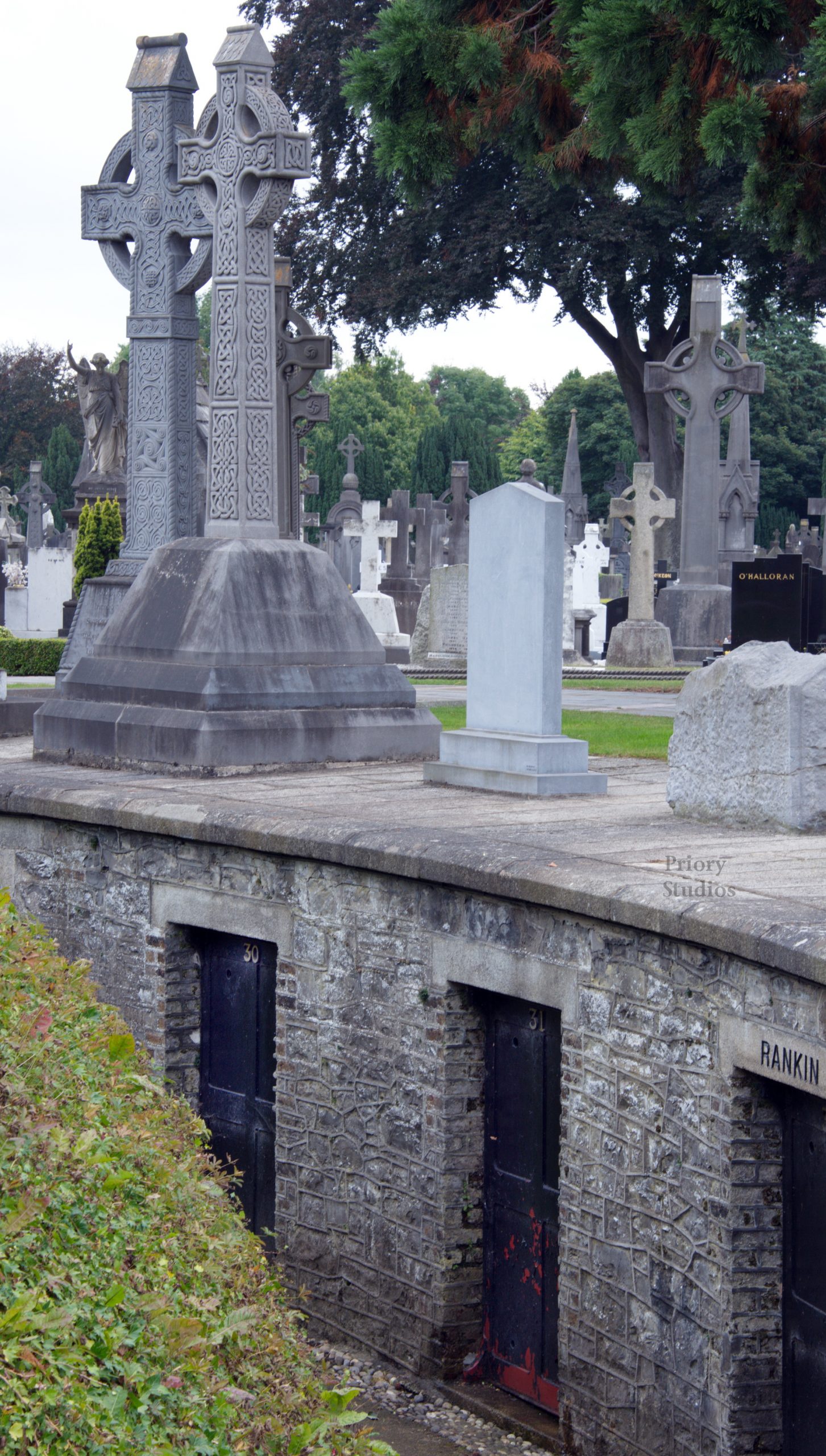 The Murphy family tomb. The gravestone was erected in 2014 as the tomb is unmarked other than by the number 30.

And nearby is the grave of James Larkin. 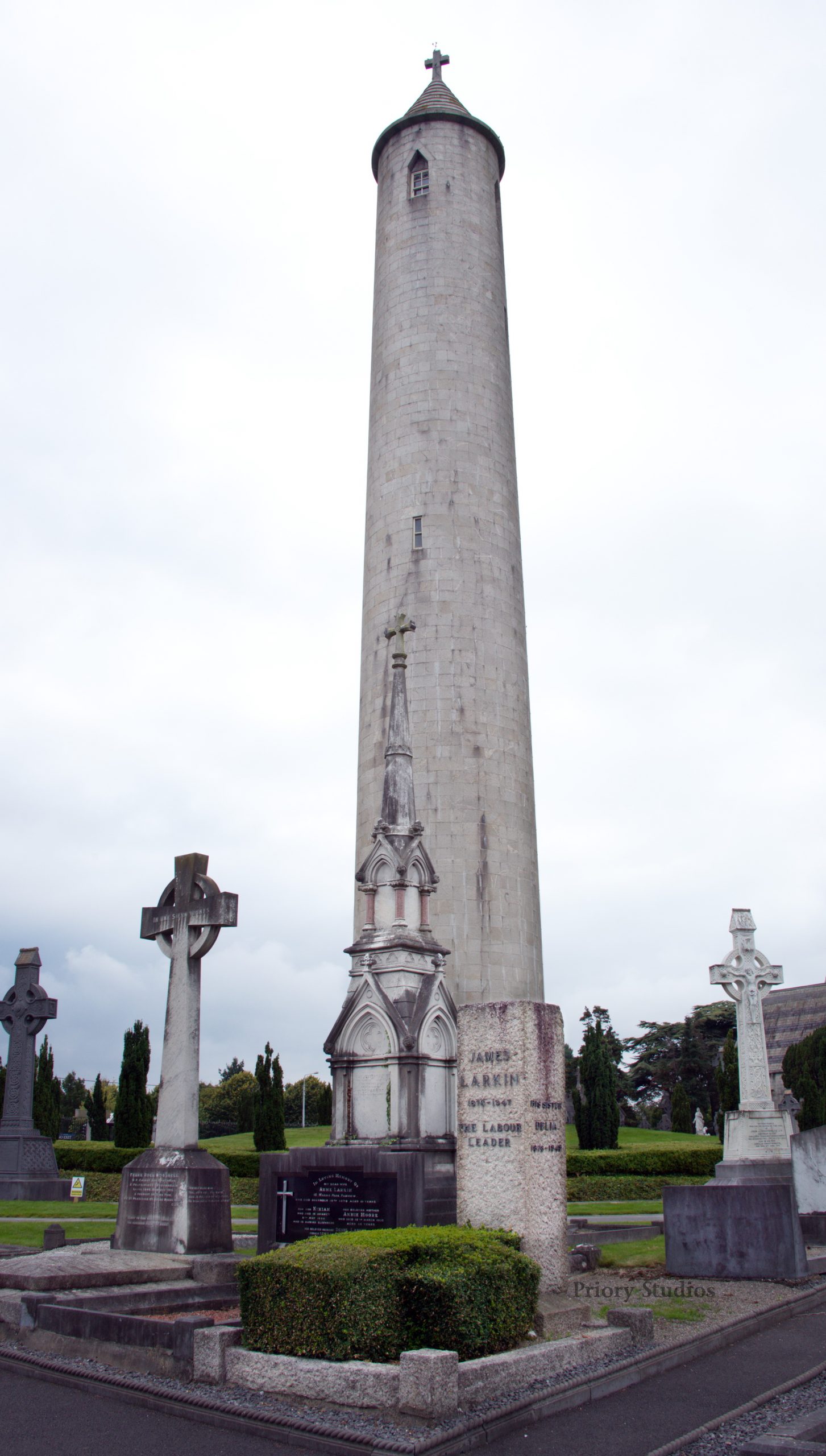