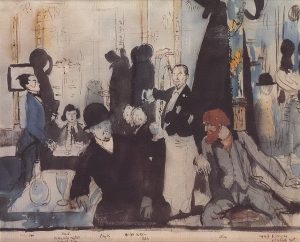 Bohemia in London centered on the Café Royal in lower Regent Street, a few steps from Piccadilly Circus. Renowned for its gaudy Second Empire décor, within thirty years of its opening in 1865, it had acquired a reputation as the meeting place for artists and literati. Orpen’s painting The Café Royal, 1912 (Musée d’Orsay, Paris) is the definitive record of its heyday.

The Café Royal by William Orpen 1912 (Musée d’Orsay, Paris). Not in the auction.

In the planning stages, as the present study indicates, he saw its elaborate interior as the obvious setting for a rendezvous of his New English Art Club friends and supporters, whose names are recorded in the inscription along its base. While the central motif, an exchange between James Pryde and Augustus John remains, the positions of some of the background figures have been altered. Orpen in the painting, now finds himself beside ‘Billie’, while George Moore, having left the table, was exiting, stage-right. His place is taken by the author, Oliver St John Gogarty. William Nicholson, who remains in place on the left of both study and finished work, apparently complained that he had not been asked to pose for the painting, but since he had already been the subject of a major family portrait (National Galleries of Scotland, Edinburgh), Orpen obviously considered this unnecessary. His dandified profile is nevertheless captured in butterfly collar, tailcoat, kid gloves and cane.

‘A Bloomsbury Family‘ The Nickolson’s by William Orpen (National Galleries of Scotland). Not in the auction.

It seems likely that the contretemps between Pryde and John is based on an actual exchange in which the older artist challenged the younger for not wearing a ‘black billy-cock’, the cabman’s hat that he was wearing. John apparently had appeared in more flamboyant cloak and topper which are seen hanging on the peg behind him. This error of judgement was apparently corrected the next time they met – James Pryde (1866 – 1941), 1949, page 49 – D. Hutton. We can sense that the incident appealed to Orpen’s sense of humour, since hats feature so prominently in the present drawing. He also realised the seductions of the setting. A companion sketch – one of several – illustrates the artist alone, but for the waiter, and is captioned ‘This drawing means no more champagne’ (sold Christie’s, South Kensington, 22 March 2012, lot 41).

Elsewhere in the present drawing, the flasks of water, served with absinthe are noteworthy – a possible reference to Moore’s persistent defense of Degas and the Impressionists. The drawing also reminds us of Orpen’s companion group portraits – The Selecting Jury of the New English Art Club, 1909, (National Portrait Gallery, London) and Homage to Manet, 1909 (Manchester City Art Galleries) in which some of the same characters overlap. 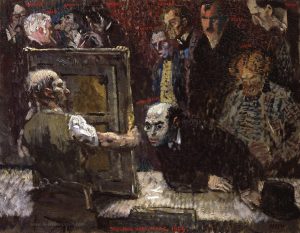 ‘The Selecting Jury of the New English Art Club’ by William Orpen 1909. Not in the auction. 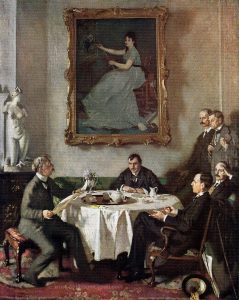 ‘Homage to Manet’ by William Orpen 1909 (Manchester City Art Galleries). Not in the auction.

Yet here they carouse, freed from exigencies of aesthetic debate. At this point, Orpen’s entourage included the principals of the British avant-garde, and while it inspired the later Café Royal interiors of Charles Ginner and Adrian Allison, it remains the essential treatment of the subject. As a revelation of planning processes – the première idée – the present drawing remains a most valuable document.

We are very grateful to Professor Kenneth McConkey for preparing this catalogue entry.

Images not in the auction added by Dominic Lee, Orpen Research Archives.