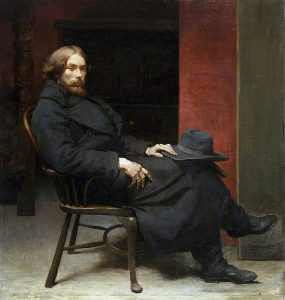 Welsh painter and draughtsman Augustus John met the Irish artist William Orpen while studying at the Slade Art School, London and they became best friends. Both are considered among the finest artists of the era. 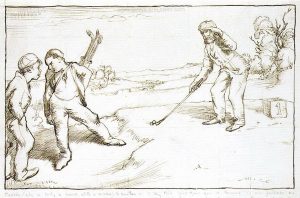 A sketch by William Orpen playing golf with Augustus John with the following text: –

“Caddie (who is going a round with a novice) to another =  I say Bill will give you a tanner if you follow us” (a tanner was sixpence).

Sadly their friendship was later tarnished by a number of events including William and Grace Orpen blaming Augustus John for the death of his wife Ida Nettleship (1877 – 1907) who was also a close friend of the Orpen’s. She died giving birth. John who was living with his wife Ida and his mistress Dorothy McNeill (1881 – 1969) in the same house (both had children by him) was famous for his ‘couldn’t care less’ attitude which the Orpen’s believed contributed to Ida’s death.

The following extract from Augustus John’s book shows he was delusional and reeks of jealousy probably resulting from William Orpen’s overall success which included Orpen spending almost two years as an Official War Artist in World War 1 while Augustus John was sent home in disgrace after two months following a pub brawl, having done practically no work. Orpen on the other hand was knighted for his war effort and went on to earn a fortune for his paintings while John did have a successful career, his works failed to match the monetary value of Orpen’s.

WILLIAM ORPEN had a cavernous studio in the basement of the same house, where he once painted a most regrettable portrait of me. Having selected Whistler’s ‘Carlyle’ for imitation, he posed me seated in profile against the wall, attired in a cast-off top-coat provided by Charles Conder. Unfortunately the result of his industry revealed no trace of the subtlety and distinction present in his exemplar. Nor, considered as portraiture, could it be said to communicate the least hint of the shy, dreamy and reticent character of his model. It has been said that the greatest portraitists, at their most inspired, in some mysterious way imbue their subject with some reflection of their own personality, so that the least noteworthy or ambitious sitter gains, by the magic of Art, a nobility and refinement hitherto unsuspected by his friends, and only perhaps dreamt of by himself. If this is so, the picture in question must be considered as an unhappy illustration of a reversal of this process, for in this case the artist in degrading his model has betrayed himself. Our physical dissimilarities were such as to admit of no confusion: we could not be said to overlap in any way; in short, we had nothing in common but our psychological differences. But such a division, in its nature incomplete, will still permit of a limited degree of contact, nor, while it holds, need it prohibit the indulgence of light play, excusable at any rate among the young of whatever species.

A visit to the zoo will be enough to convince anybody of the truth of these observations, for here, and more especially in the monkey house, we may watch the association of elements ordinarily incompatible but now united by the limitations of a common barrier.

Talking of zoos, Orpen gave me the following account of an episode at the Dublin Zoo, in which he figured honourably enough. It appears that as a student he was in the habit of visiting the zoo for the purpose of sketching the animals. One day, he was sketching a large anthropoid ape when he was surprised by this creature’s behaviour. It would approach as near as the bars of the cage permitted, and, stretching out its arm, endeavour to divert the attention of the young artist, but without malice, while at the same time uttering soft, conciliatory sounds. Orpen, touched by these overtures, and perhaps a little flattered, responded with a smile and a cordial handshake. ‘It seemed the only thing to do,’ he said. But on succeeding visits, for he had still his studies to finish, he observed with some anxiety that his model’s friendly attentions not only persisted but became progressively warmer and more intimate. The hesitating touch had now become a frank caress, and there was an expression in the creature’s eye which could mean only one thing – Billy Orpen was loved by a monkey! Was he offended? Not a bit! He was but a youth and still a tyro in amatory experience, although subject no doubt, like most boys and girls, to the mysterious urgencies of sex. Besides, as he confessed, he had grown, if not yet to love, certainly to esteem his simian suitor, and if the latter could hardly be classed as a beauty by European standards, no more, for that matter, could he himself. The situation was difficult, but in the end common sense, with which he was well provided, prevailed. There could be no alliance. Popular prejudices were too strong; there was the Law to think of, too, and what about his career? He consulted the keeper, who, taking the only sensible course, arranged a swap, and his disconsolate charge, in exchange for a duck-billed platypus and a young South American peccary, was removed to another establishment. I will not attempt to describe the final scene, except to report that it was heart-breaking – and violent. 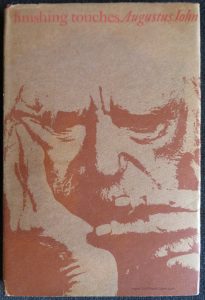 William Orpen’s painting of Augustus John is in fact one of Orpen’s finest early portraits of a young artist whose behaviour was often far from shy, dreamy and reticent so John’s comments about it long after Orpen’s death are nothing but sad reflections of a bitter man.