Walter Badger of the Golden Arrow Train and William Orpen

Walter Badger was Head Inspector of the Golden Arrow Train from Victoria London to Gare du Nore Paris with note and sketches by William Orpen, a regular passenger. 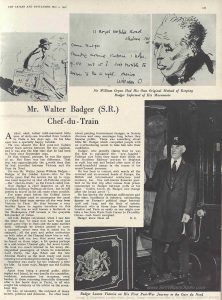 A neat, alert, rather mild-mannered little man of sixty-one traveled from London to Paris a few days ago. In his blue eyes was a specially happy twinkle.

He was aboard the first post-war Golden Arrow train service between the two capitals, and it was also the first time that he had been in Paris since September 1939.

In that respect, perhaps, he was like many of us. But there was one difference. That trip was approximately the 4,000th time that he had traveled between Victoria and the Gare du Nord.

He was Mr. Walter James William Badger – Badger of the Golden Arrow – who for the twelve years that the service ran up to 1939, was head inspector on that all-Pullman express – “the chef-du-train,” as the French called him.

Now Badger is chief inspector on all the Southern Railway Pullman services but he still prefers to travel on his old route when possible.

For some years before the Golden Arrow arrived, Badger used to accompany the usual 11 o’clock boat train service all the way from Victoria to Paris. He thus became a very familiar figure to regular travelers on this route. He was as well known a landmark as the Shakespeare Cliff tunnels or the quayside fish-market at Calais.

All told, Badger calculated, when I saw him the other day, he must now have made just about 4,000 trips to Paris and the same number back. Although he always needed to carry a passport, never once was it asked for or stamped all the port and police authorities on both sides of the Channel knew him so well.

Badger told me, too, that never once was he bored on those trips a bit queasy perhaps in a mid-winter Channel gale, but never bored. He took too much interest in his many distinguished passengers, of whom he remembers Lord Derby, the Aga Khan and the late Admiral Beatty as the most ready and most amusing conversationalists among his “regulars”.

Inspector was really far too ordinary a title for him. In some ways, Badger was the Golden Arrow.

Apart from being a general guide, philosopher and friend, he was usually the counselor, confidant, entertainer (on occasions, even banker to those returning financially distressed after a few hectic days in Paris), to all who sought his company or his advice on the seven- hour trip.

He was, of necessity, the recipient of many secrets, political and domestic. He often knew about pending Government changes, or Society divorces and snap marriages long before they became public. There was something about little Mr. Badger which compelled people with an overburdening secret to take him into their confidence.

Badger, who proudly claims that he was the first to popularise the “new-fangled” Pullman cars when they made their debut on the Southern Railway services to Brighton in 1908, has met and looked after most of the world-household names in the course of his cross-Channel journeys.

He has been in contact, with nearly all the crowned and ex-crowned heads of Europe, the British and international aristocracy (and crookery, too. One well-known financier gaol bird on his first trip after release from prison commented to Badger between puffs at his cigar, “Golden Arrow, eh. Badger, nice change after the broad arrow”).

He has known the American millionaires and film stars, headliners in industry, outstanding figures on Europe’s political stage between 1918 and 1939, and the flock of artistic dilettante who in those days flitted between London and Paris as easily as one might now take a bus from Hyde Park Corner to Piccadilly Circus rush hours excepted.

A sketch of William Orpen by Walter Badger clearly made from the photo below, although this photo is addressed to Hollander. 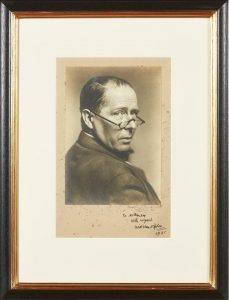