2018 is the 100th anniversary of the formation of the Royal Air Force. 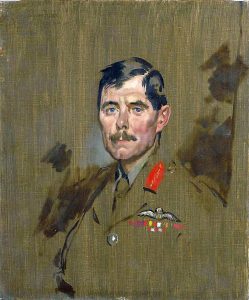 Douglas Haig introduced Orpen to Trenchard who completed his portrait in one day. 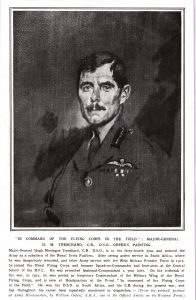 ”In Command of The flying Corp in The Field” Major-General H.M. Trenchard, C.B., D.S.O. – Orpen’s painting.

Major-General Hugh Montague Trenchard, C.B., D.S.O., is in his forty-forth year, and entered the Army as a subaltern of the Royal Scots Fusiliers. After seeing active service in South Africa, where he was dangerously wounded, and other Army service with the West African Frontier force in 1912, he joined the Royal Flying Corps, and became Squadron-Commander and Instructor at the Central School of the R.F.C. He was promoted Assistant-Commandant a year later. On the outbreak of the war, in 1914, he was posted as temporary Commandant of the Military Wing of the Royal Flying Corps, and is now at Headquarters at the Front “In command of the Flying Corps in the Field.” He won his D.S.O. in South Africa, and his C.B. during the present war, and has throughout his career been repeatedly mentioned in despatches. [From the portrait painted at Army Headquarters, by William Orpen, A.R.A., one of the Official Artists on the Western Front.]

The wound mentioned above was when Trenchard was shot in the chest in a battle at Krugersdorp in October 1900, losing a lung. He made a miraculous recovery following a Bobsleigh accident in Switzerland and went on win the St. Moritz Tobogganing Club’s Freshman and Novices’ Cups for 1901. He also took up tennis to improve his strength.

Trenchard served in Ireland in 1910, bored with life there, he took up flying in the newly formed Central Flying School. By 1914, the Royal Flying Corps and the Royal Naval Air Service had around 2000 personnel.  By 1919 the newly-formed Royal Air Force numbered more than 114,000 personnel and 4000 combat aircraft in 150 squadrons.

After World War One Trenchard fought hard to preserve the Royal Airforce’s independent existence by claiming that the next major war could be won by bombing alone.  While that theory proved wrong in World War Two the R.A.F did play a critical role in winning that war by giving the Germans a taste of their own medicine and achieving air supremacy.

Trenchard served as Chief of the Air Staff from 1919 until his retirement 1929 during which time he became the first Marshal of the R.A.F.  He was appointed commissioner of the London Metropolitan Police from 1931 to 1935 where he replicated his R.A.F. experience and established the Police College at Hendon. In 1935 he joined the United Africa Company, where he served for 17 years in senior management. He was knighted in 1936. 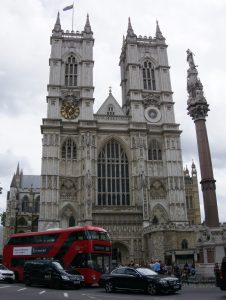 Trenchard died on 10 February 1953, aged 83. He was buried with all due honours in the Battle of Britain Chapel in Westminster Abbey. 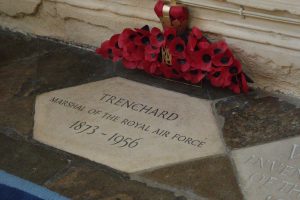 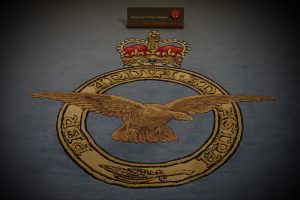 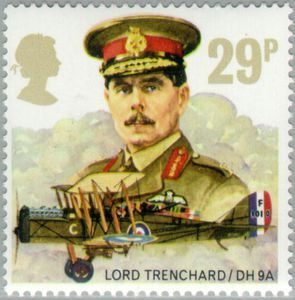 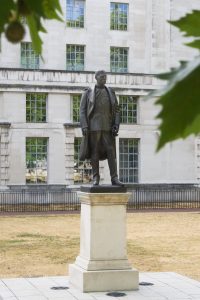 Bronze sculpture of Trenchard on Portland stone pedestal with granite steps. Victoria Embankment Gardens, Westminster, London.  Around the plinth are the four badges of the Royal Air Force, the Royal Scots Fusiliers, the Metropolitan Police, and the W.A.F.F. (one at the rear). Sculptor was William McMillan (1887 – 1970). Unveiled 19 July 1961 by Harold Macmillan.

A road in Taunton, Somerset where Trenchard was born was recently renamed ‘Trenchard Way’ (14th June 2018). The 3rd Viscount Trenchard unveiled a memorial to his grandfather.