Traitors and Judges at The King’s Inns, Dublin (Lavery & Orpen) 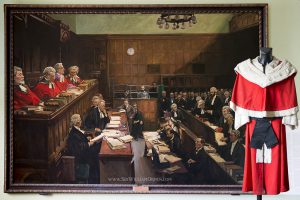 Casement lost his appeal, was stripped of his Knighthood and hanged in Pentonville Prison, London on 3 August 1916 for his involvement in shipping arms from Germany to Ireland to be used in the Easter Rising. His ‘Black Diaries’ which implicated him as a homosexual were thought to be a propaganda exercise by the British Government but were later proven to be genuine.

Mr Justice Darling commissioned Lavery to do the painting but Lavery didn’t complete the job until 1931 so Darling never paid him and the painting stayed with Lavery till his death in 1941.

Alongside the painting is the gown of Sir Thomas Francis Molony, 1st Baronet, (1865–1949) the last Lord Chief Justice of Ireland which is similar to those worn by the judges at Roger Casement’s appeal trial. 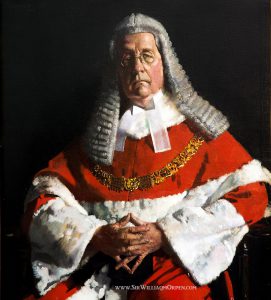 Sir John Lavery and Sir William Orpen were acquainted, they both served as Official War Artists in WW1 and Lavery attended the funeral of Orpen in 1931.

Text and Photographs by Dominic Lee.