To the Unknown British Soldier in France by Sir William Orpen 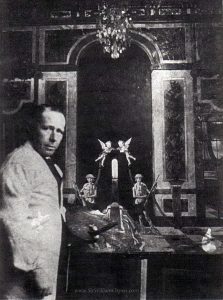 Photo of Sir William Orpen with the original version of ‘To the Unknown British Soldier in France’.

Orpen who was an official war artist during WW1 and was commissioned to paint three Peace Conference pictures for the Imperial War Museum. Two of them, the one of the ‘Conference at Quai d’Orsay’, and the other of the ‘Signature of the Treaty of Versailles’ were already in the museum. The third was to represent a room in the Palace of Versailles called ‘The Hall of Peace’, the room through which you enter the long ‘Galerie des Glaces’, where the treaty was signed.  For the third painting, he had spent nine months working on studies of about forty politicians, generals, and admirals (‘Frocks’ as he called them). “In spite of all these eminent men, I kept thinking of the soldiers who remain in France forever”.  He was so fed up with how busy the Frocks were, congratulating themselves for winning the war and forgetting about the hundreds of thousands of soldiers who lay buried in unmarked graves, he just couldn’t continue. He blotted them all out and replaced them with a coffin draped in the British flag, guarded by two emaciated British comrades and cherubim, and named it ‘To the Unknown British Soldier in France’. 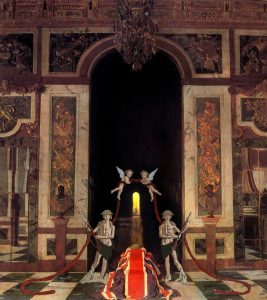 The original version was recreated in colour by Priory Studios from a B&W photo.

The Imperial War Museum refused to accept it ‘there was no such thing as emaciated British soldiers’ and Orpen lost his fee of £2000. However, after the painting was exhibited in London, Orpen received many letters from mothers who lost their sons and wives who lost their husbands and from soldiers who had served in France, congratulating him on the picture.

When Douglas Haig died of a heart attack in 1928 (aged 66) Sir William Orpen made some modifications to his controversial painting by removing the “offending” emaciated British soldiers and donating the painting to the Imperial War Museum, in honour of his dear friend. 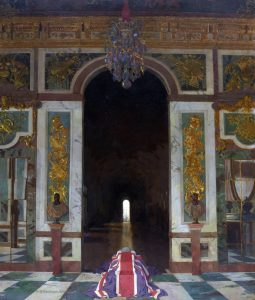 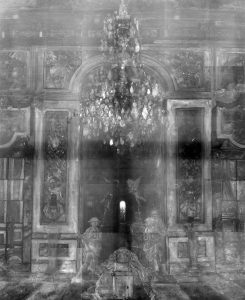 An X-ray of the altered version of the painting reveals the two figures and cherubs which were over-painted by Orpen. In fact, over the years the overpainting has somewhat faded and the figures are starting to reveal themselves to the human eye. 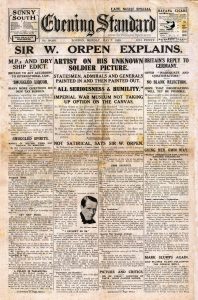 Orpen explains the painting ‘Unknown Soldier’ in the Evening Standard (1923). 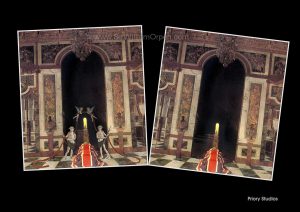 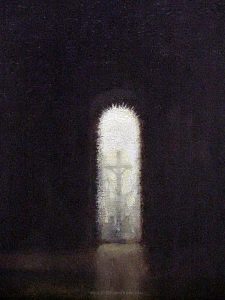 Close-up detail of the background of ‘To the Unknown British Soldier in France’. 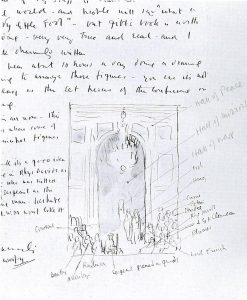 Transcript of a letter from Orpen to Mrs. St George: UNKNOWN SOLDIER.

“I’ve got such a cold I can’t write – what a birthday I had sneezing snuffling coughing the whole time and all my bones aching.

Have you read Philip Gibb’s “Back to Life” it makes me feel sick – I’m not looking forward to the day my “Stuff” is launched on a cold cruel world – and people will say “What a Bloody little Fool” – but Gibb’s book is worth reading – very very true and real – and I think charmingly written.

I’ve been about 10 hours a day doing a drawing trying to arrange those figures – you see its not so easy as the set pieces of the Conference or Signing.

33 in all now – this shows where some of the Principal figures come.

I think it’s a good idea putting in Rhys Davids as a boy who was killed and a sergeant as the fighting man – perhaps the I.W.M. won’t like it”.

I’m posting this today in honour of my friend Chris Pearson (RIP) – Orpen Research Project, who would be 70 today 30th December.