The other five will be added to this site shortly.

John Count McCormack 1923 by Sir William Orpen (NGI). Not in the auction.

For J.B. Manson writing in 1923 Orpen’s natural ability as a draughtsman was his handicap. He was ‘like a miner who struck a vein of gold at the first attempt’, and although he surveys the best of the artist’s pre-war works in the graphic media, Manson sees no development. At that moment, the ‘Monarro Group’ painter was still struggling to come to terms with Impressionism and Orpen’s supreme self-assurance seemed like a trap. Yet even within Manson’s reproductions, the important distinctions between the Rembrandt-esque and the Ingriste, taking in other developments along the way, went largely ignored.

The most arresting of Manson’s eight illustrations was that of the present drawing. Unlike most others in the article, this study of a boxer, his left arm raised in a victory wave, was highly finished – so much so that the ‘winner’ seems identifiable. Yet although various names have been proposed – that of ‘Cyclone’ Billy Warren, a well-known Dublin character, seems most likely – it has so far not been possible to propose a completely definitive identification. Fights nevertheless interested Orpen and back in July 1910, he had wagered £4 on the outcome of the World Heavyweight Championship between Jack Johnson and James J Jefferies.

The present drawing relates to another carefully drawn three figure composition entitled The Boxer, circa 1913, (Crawford Art Gallery, Cork) and both describe the moments immediately following a knock-out. In a letter of that year to the dealer, William Marchant, (Hyman Kreitman Archive, Tate), Orpen proposed a single, as yet unrealised, composition showing both victor and vanquished. 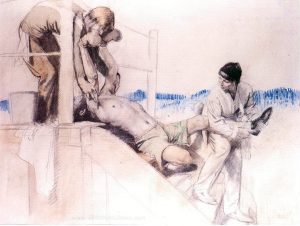 The Boxer by William Orpen 1913, (Crawford Art Gallery, Cork). Not in the Auction.

However, before this occurred, events in the year leading up to the outbreak of war, intervened and the The Winner (The Champ) drawing was selected as one of ten to be reproduced in photogravure facsimile, in a special portfolio published by Chenil Gallery. In this context it stood alone and appears unrelated to the Howth and other loosely autobiographical or family drawings in the group. It is nevertheless, much more than a simple figure study redolent of the studio or the life room. Frank Rutter, reviewing the portfolio in The Sunday Times, declared that it ‘impressed one by the force with which the muscular strength and fitness of the negro champion are suggested …’ while a writer in The Daily Graphic found that ‘the brutal but virile black boxer, The Winner, is what an artist would call the most “stunning” of them all …’ The exposure of this magisterial drawing and its subsequent showing in New York, may well have blunted Orpen’s ambition to paint the great knock out picture, as he embarked on the third of his celebrated ‘Irish Trilogy’ – Nude Pattern: The Holy Well (National Gallery of Ireland, Dublin).

Back in 1913 however, when boxing was establishing itself as a sport, and its origins in the ‘prize-fighter’ fairground side-show were still obvious to all, the idea of depicting a popular mass entertainment greatly appealed to Orpen. Connections with American painters, Thomas Eakins and George Bellows may seem obvious but, given that neither had a profile in Dublin, or London at the time, are unlikely. The subject, treated by William Nicholson in his woodblock series, Almanac of Twelve Sports, 1899, would certainly have been known to Orpen, but his treatment of the ‘champ’, for all Manson’s niggles, stands out as iconic. In all his anatomical accuracy and the beauty of the line with which it is conveyed, the artist has indeed struck ‘a vein of gold’.

We are very grateful to Professor Kenneth McConkey for preparing this catalogue entry.