By descent through the Chamberlain Family (it hung in Chamberlain’s dining room).

Now hangs in the Palace of Westminster, London.

Chamberlain’s over-optimistic and misguided speech, ruined his reputation and overshadowed the considerable achievements of this caring politician. Infamous for his ill-fated “Peace in Our Time” speech after his visit to Hitler in Munich in 1938, this portrait shows the Conservative Member of Parliament in 1929 at an interesting point in his career. The 1929 (30th May) General Election saw the Conservatives lose power to a hung Parliament, in which Lloyd George held the balance of power, Ramsay McDonald’s Labour being the largest Party. Chamberlain himself retained a seat despite changing constituencies Birmingham Ladywood, which he just held in 1925 against Oswald Mosley, to the safer Birmingham Edgbaston. Although he had been Chancellor of the Exchequer in the Government and was to do so again and then to become P.M., in the 1925-1929 Government he chose to be Minister of Health.

He served as Prime Minister of the United Kingdom from May 1937 to May 1940 (the year he died from Cancer). 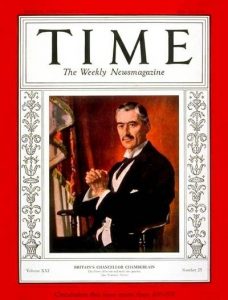