The Poet by William Orpen (with Sean Keating).

‘The Poet’ by William Orpen R.A., R.H.A. including some studies. The models are possibly Sean Keating – Orpen’s assistant at the time (he was also a student of Orpen’s at The Metropolitan School of Art in Dublin) and Evelyn St. George – Orpen’s lover. 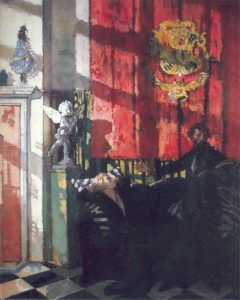 Interior of the Artist’s Studio, with a lady seated listening to a gentleman reading from a book. 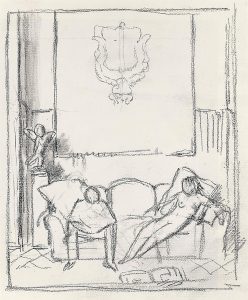 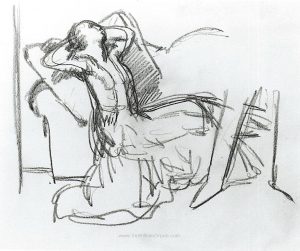 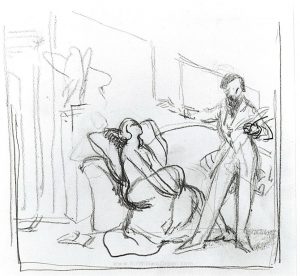 The man is almost certainly Sean Keating and the woman may possibly be Mrs. St. George, which could explain why she acquired the picture. However, it does not explain why she did not buy the picture first off, obtaining it later, probably in 1921, when her relationship with Orpen was apparently beginning to cool, and secondly why it was entered in the Mrs. St. George Sale when the other family pictures were not. However, it could explain why it was bought back into the family. The features of the model do bear some resemblance to Mrs. St. George. The Crest above the man does not appear to be the Orpen Family Crest.