There is some conflicting theories about the origin of the Orpen family who settled in Cork and Kerry in the mid 17th Century. Did they originate from Somerset and Salisbury or Norfolk in the UK, or were they descendants of Erpin from France? Was their name originally Erpingham, Orpingham or Orpington.

I’m going to skip all that and get straight to the artist Sir William Orpen’s grandfather Sir Richard John Theodore Orpen (1788-1876) of North Great Georges Street, Dublin and Ardtully, Kerry. He married Elizabeth Stack in 1819, they built a 27 room mansion (1847) on the site of an old castle where the rivers Roughty and Obeg meet, a few kilometers from Kenmare, Kerry (in Irish – Ardtuilè means high flood). 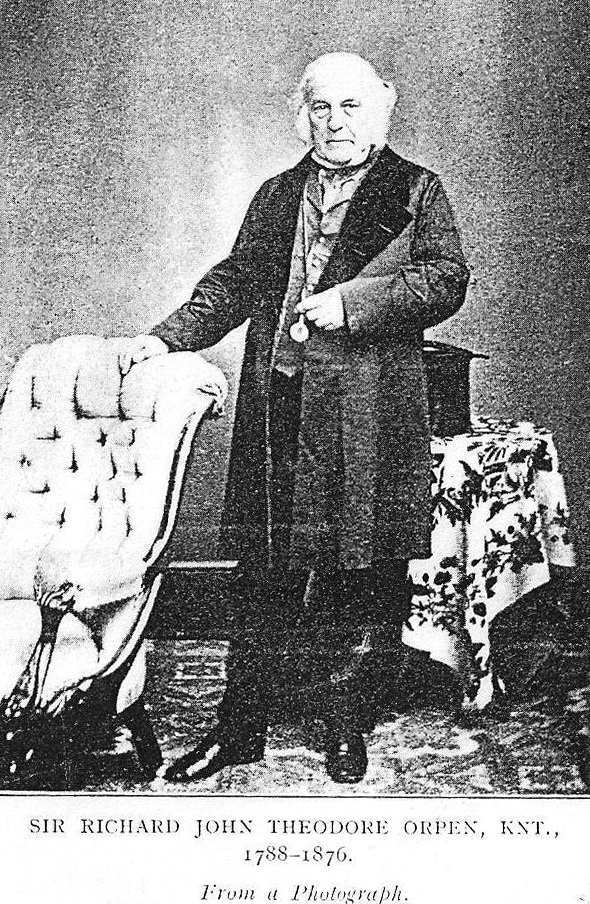 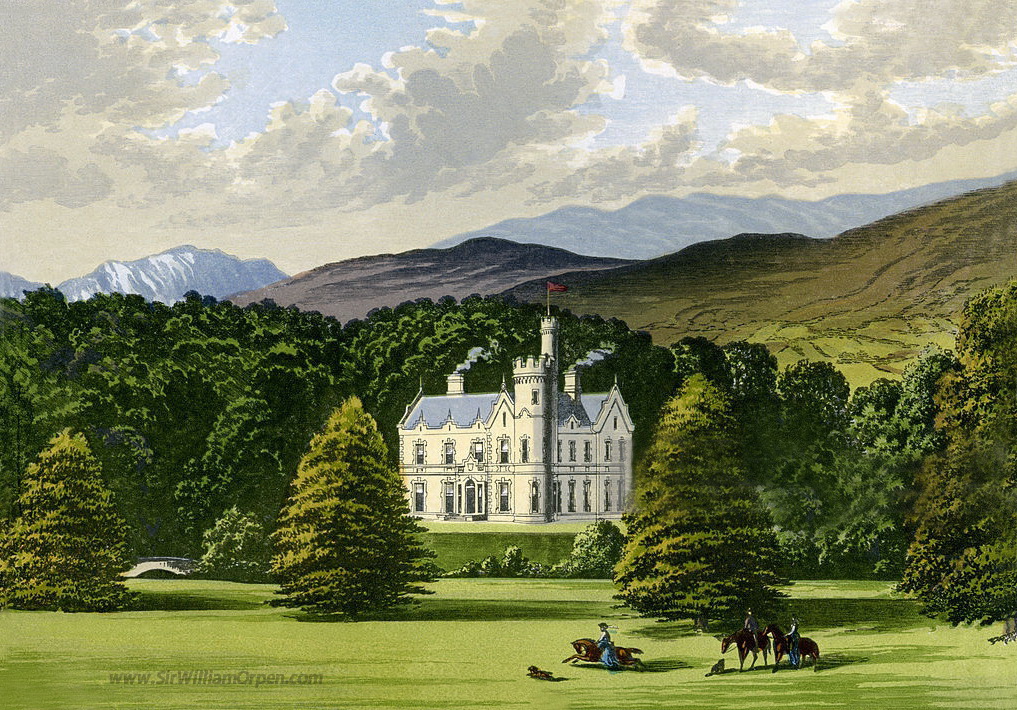 Ardtully, County Kerry. The house was built in 1845 by Sir Richard Orpen. A print from a Series of Picturesque Views of Seats of the Noblemen and Gentlemen of Great Britain and Ireland, edited by Reverend Francis Orpen Morris (1810 – 1893), Volume II, William Mackenzie, London, circa 1880. Wood-engraved plates after paintings by Benjamin Fawcett and Alexander Francis Lydon.

Painting of the bridge pool Ardtully by Arthur Herbert Orpen (1849). The bridge was built by his father Sir Richard John Theodore Orpen. Although Ardtully had an ‘Ice House’, the Orpen family caught so many salmon here that they regularly sent the excess to the market.

By the time Sir Richard died at the age of 87 his estate consisted of about 12,000 acres in Kerry and about 300 in Cork. He was knighted in 1868 for his services to the legal profession.

Regarding his knighthood, an article in the Irish Law Times quotes “On every ground, therefore – his high social and professional standing, his personal character as an educated gentleman, and the general esteem and regard entertained for him by his professional brethren – we consider the honour conferred in the present instance has been most judiciously and deservedly bestowed.” 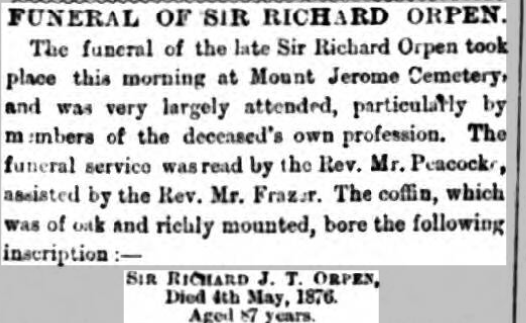 The funeral of Sir Richard Orpen.

After Sir Richards death, Ardtully was inherited by one of his sons – Right Rev. Dr. Raymond D’Audemar Stack Orpen, Bishop of Limerick and Ardfert and Aghadoe. He had only just retired when Ardtully was destroyed by the IRA in 1921. It has remained a ruin ever since. Other houses destroyed in Kerry by the IRA included Kilmorna (the owner – Sir Arthur Vickers was brutally murdered) and Ballyheigue Castle (the ruin of which is now on a golf club). 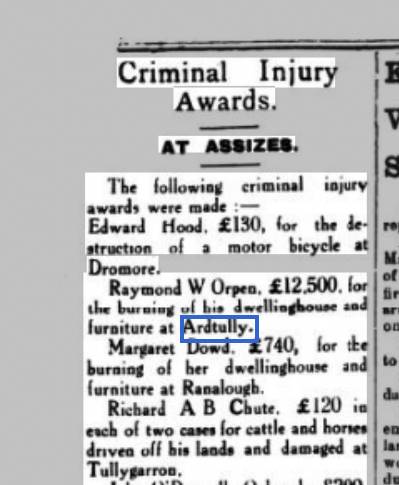 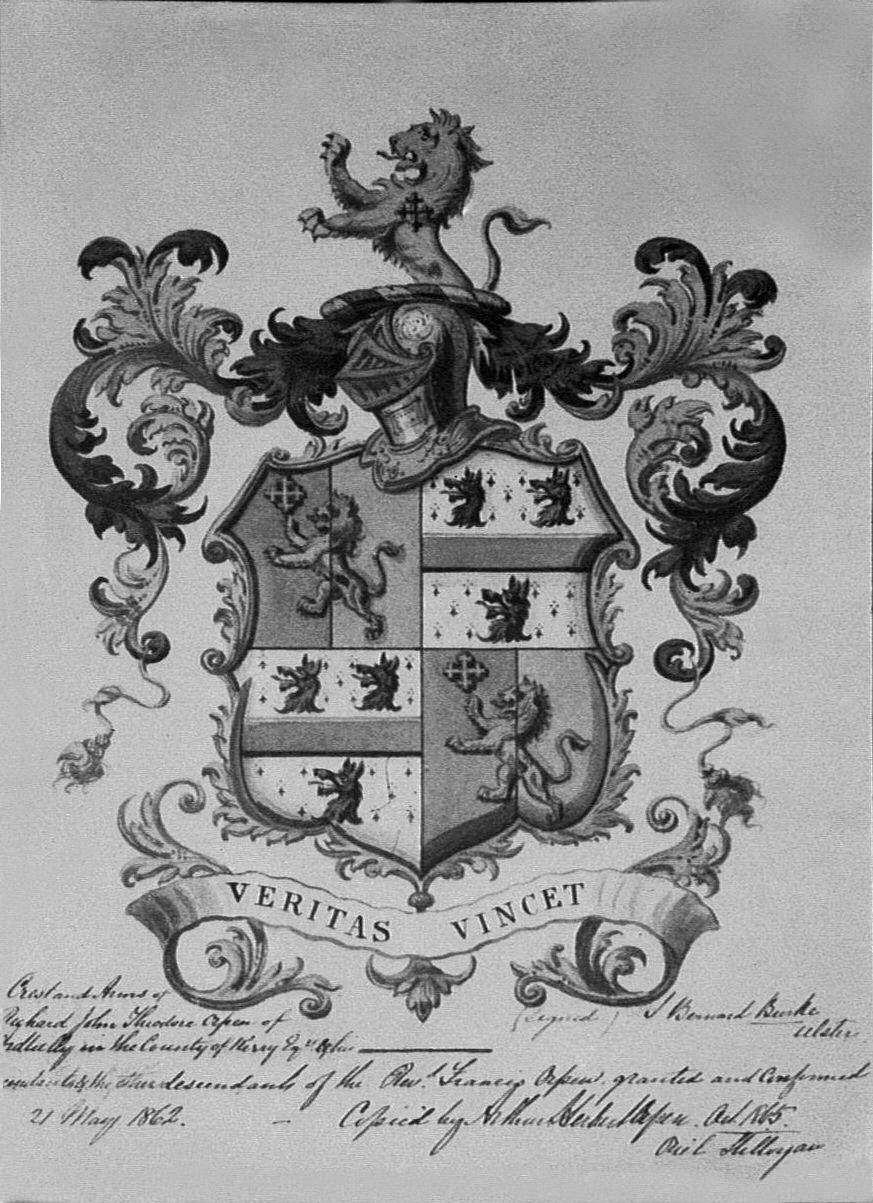 Recent photographs by Priory Studios of Ardtully Castle in ruin: 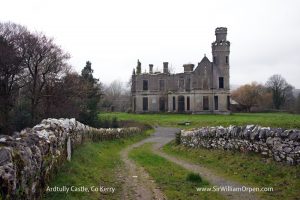 View from the bridge over the Roughty river. 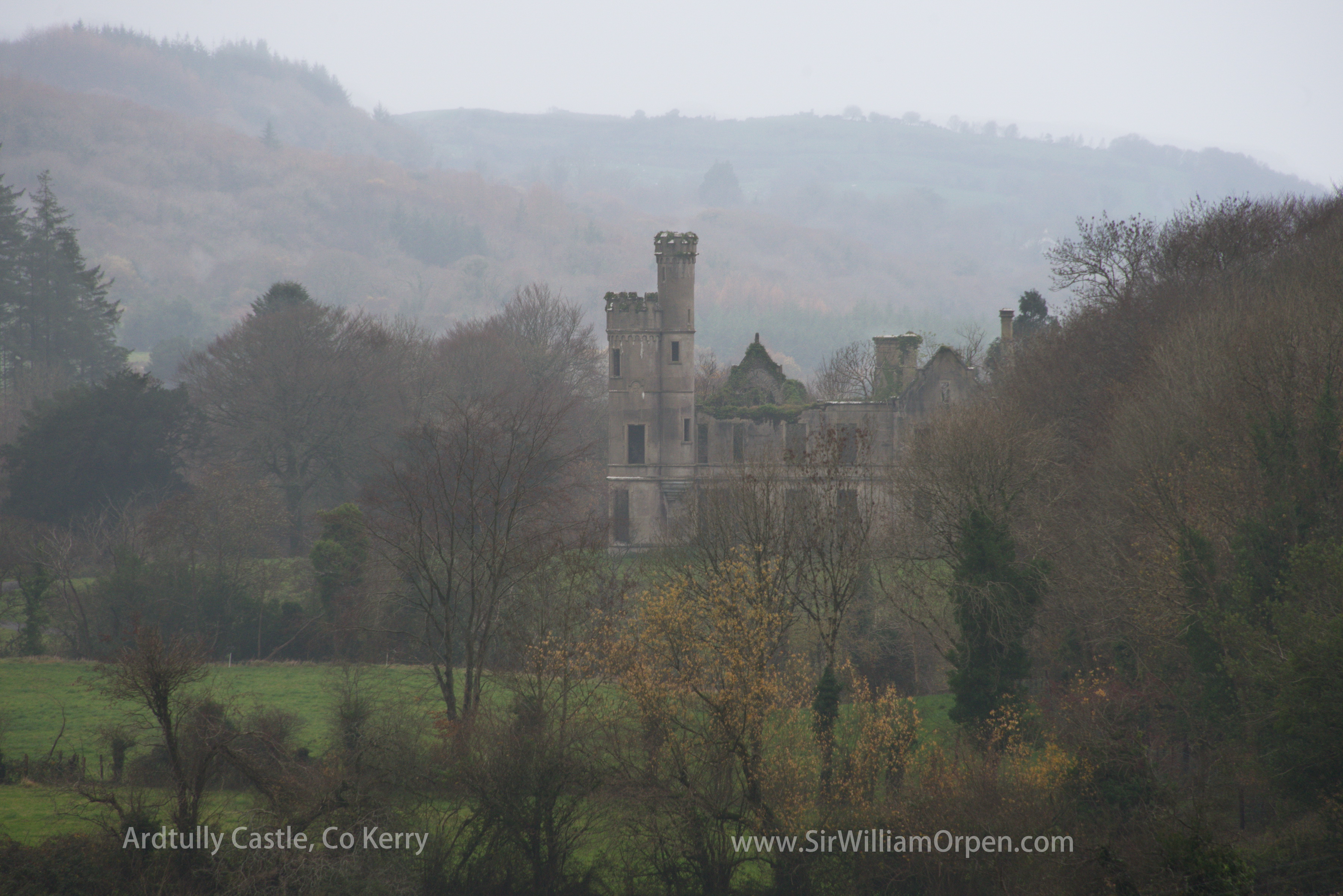 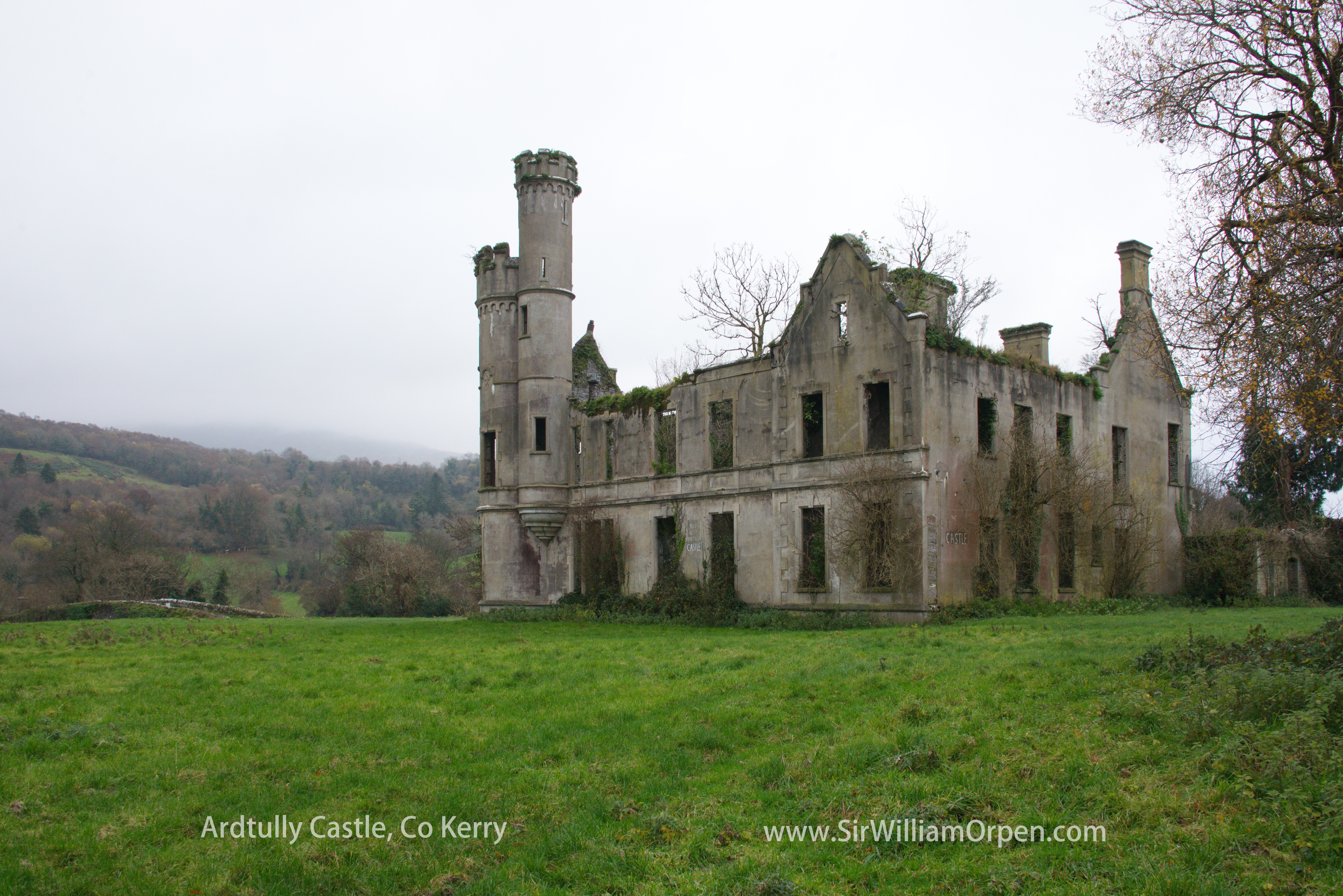 Another view of Ardtully Castle.

View of the interior of Ardtully Castle. 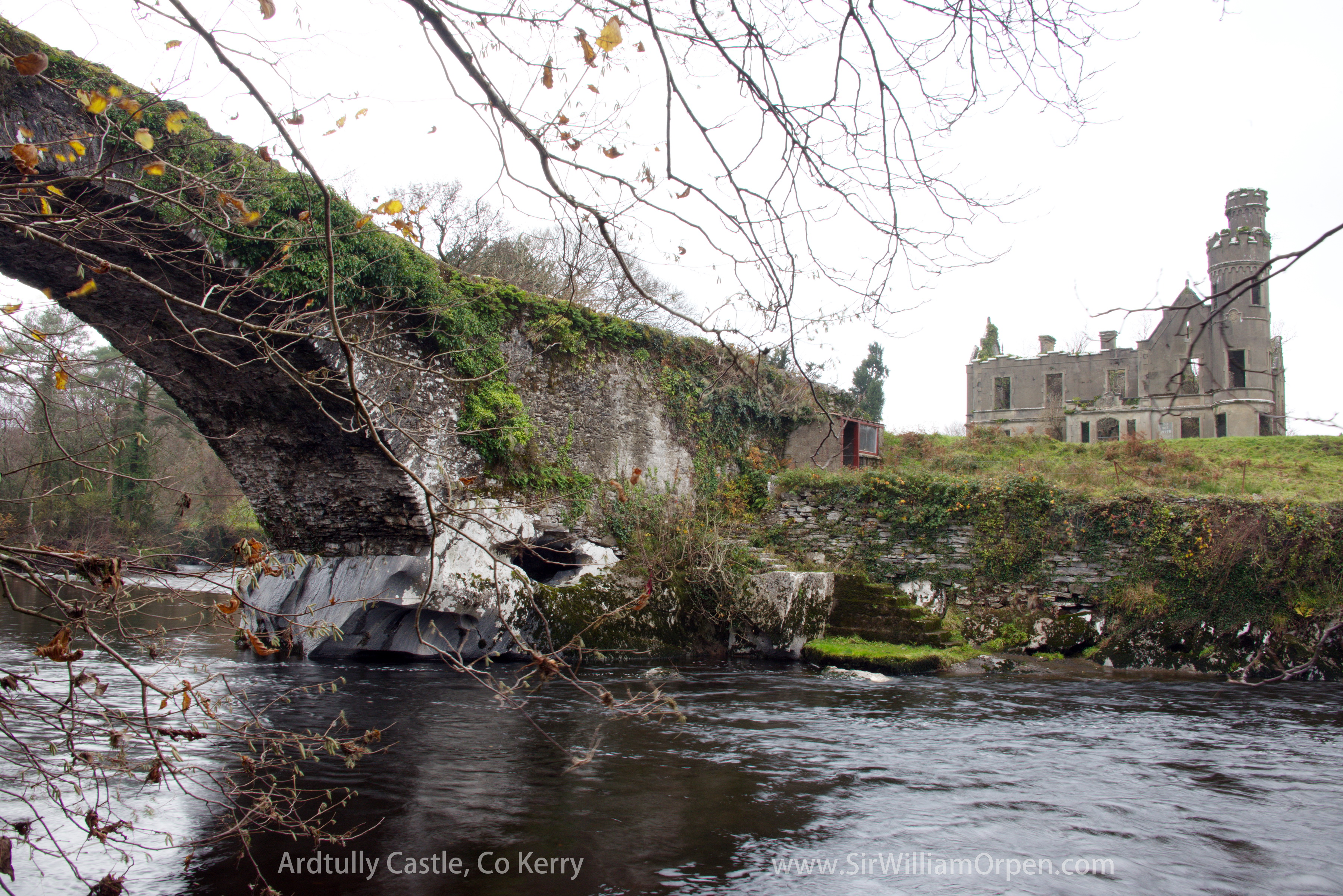 View from the Roughty River at Ardtully.

Elizabeth Ida Rebecca Orpen (married Captain Blacker), she died at 2 Park Villas, (which is on the same street as ‘Oriel’ the home of her brother Arthur Herbert Orpen in Stillorgan).

Note of £6,000 paid in compensation to R.W. Orpen for the destruction by fire of Ardtully by the IRA. 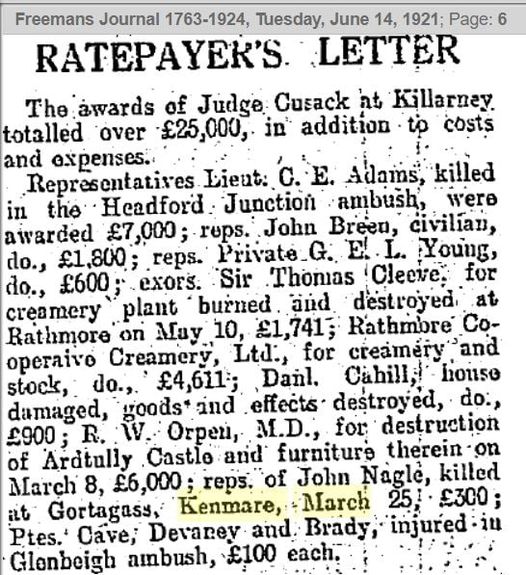 Ardtully Castle was sold in 1967 to a salmon fishing consortium that included the fishing rights. 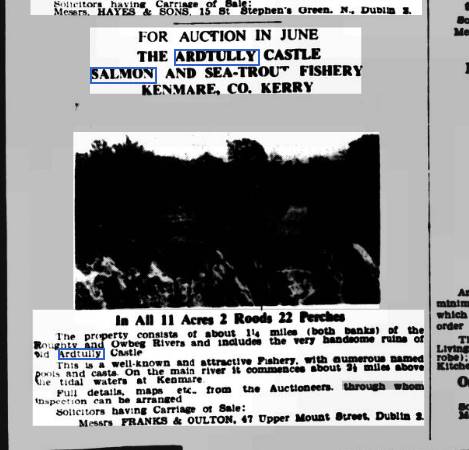