‘The Model’ by William Orpen (1911) with friend and fellow artist Alfred William Rich.

Graphite and watercolour on paper.

Rich was a watercolourist, teacher, author and a friend of Orpen. He published a book in 1918 – ‘Water Colour Painting’.

Flossie Burnett is the same model on couch and in the painting on the wall. She was one of the models Orpen brought from London to the Dublin Metropolitan School of Art (now N.C.A.D.) to pose nude as it was difficult to find an Irish girl for that task. 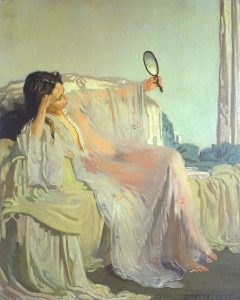 ‘An Eastern Gown’ by William Orpen (1906). The model is Flossie Burnett.

Alfred Rich also features (with a cigar) in these two paintings by William Orpen – ‘Cafe Royal’ in 1912,  and ‘The Selecting Jury of the New English Art Club‘ in 1909, (National Portrait Gallery, London). 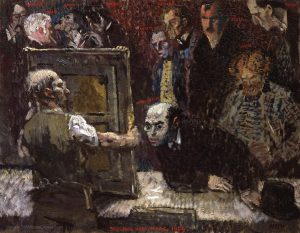 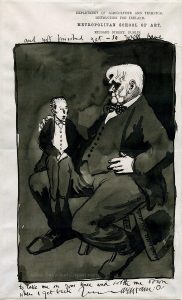 Part of a letter with a self portrait of Orpen sitting on Alfred Rich’s knee.