‘The Black Cap’ by Sir William Orpen and the mass murderer Henri Landru.

The connection between the artist William Orpen, the mass murderer Henri Landru, the judge Sir James Stirling and the actor Charlie Chaplin.

Black &White photo (Colour added digitally) of Sir William Orpen working on ‘The Black Cap’ taken by Edward G. Malindine (1906-1970). Malindine was a staff photographer for the Daily Herald, before and after World War 2. He was an army officer and served as an official photographer for the War Office during WW2 (see 2nd photo below).

Before I get into explaining why I believe this painting has been wrongly attributed to Orpen’s experience attending the trial in November 1921 in Versailles of the French serial killer – Henri Désiré Landru, (1869 – 1922), I’d like to give some background information on the rather fascinating case of this mass murderer.

A study for The Trial of Landru by Sir William Orpen. The original hung in the Paris office of The Daily Mail, it disappeared when that office was closed down in the 1930’s.

Landru served his compulsory 4 years in the French army (1887 – 1891). He had a daughter with his cousin but married another woman and they had 4 boys. He himself was the victim of a scam and I guess he then figured it was a good way to make money. He originally started out scamming lonely poverty-stricken women out of their possessions, then their pensions. He was caught in 1900 and served two years in prison for fraud after he tried to withdraw funds from the Comptoir d’Escompte bank using a fake identity. While in jail he apparently attempted suicide. Upon his release he returned to his criminal activities and served several more spells in prison. 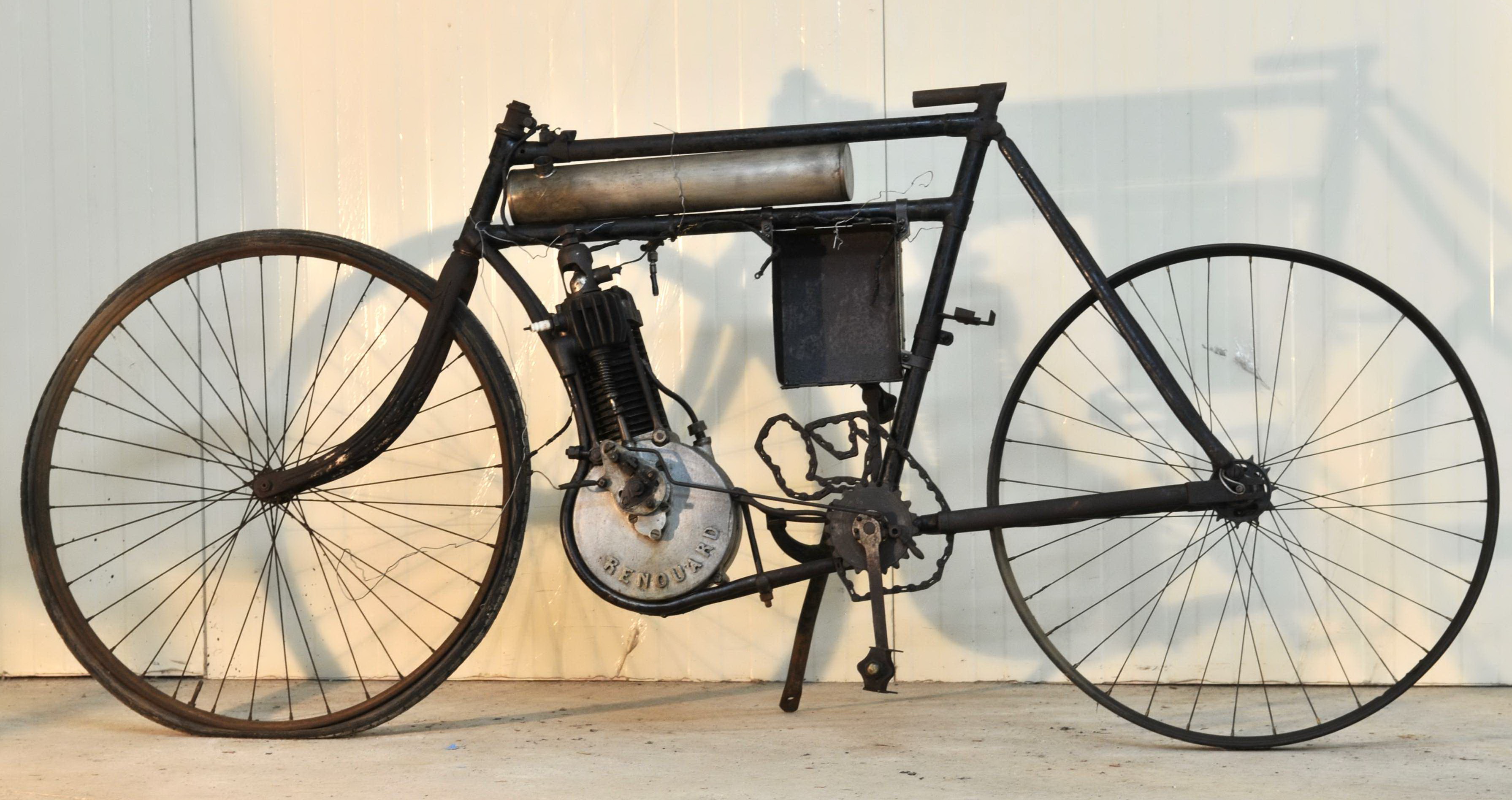 Among his many frauds, Landru invented a crude looking motorbike but as soon as he got finance to manufacture it, he disappeared with the money.

Around 1908 he devised a plan to keep himself out of prison – he would murder his victims.

His scam victims numbered in the hundreds but some 60 women he was involved with were never traced. Although married with children, Landru met many of the women by advertising in a ‘Lonely Hearts’ column of the French newspapers – “Widower with two children, aged 43, comfortable income, serious and moving in good society, desires to meet widow with a view to marriage”. Once he had his wicked way with them he would murder them, dispose of their bodies by burning them in an oven and take their money.

His wife and two of his four sons were complicit in assisting him. His own father committed suicide apparently in distress at his son’s activities.

He got away with it for so long, especially during the War period as there was little or no police manpower to engage in searching for missing persons. And the war itself, leaving many women suffering the loss of their men folk was a perfect opportunity for Landru to find vulnerable women which he could pray upon. He also went to great lengths to convince the families of his ‘missing victims’  that they were still alive.

Evidence of human bones were found in his oven and Landru, although protesting his innocence was found guilty and executed by guillotine in 1922. His severed head somehow ended up preserved in a museum in America. 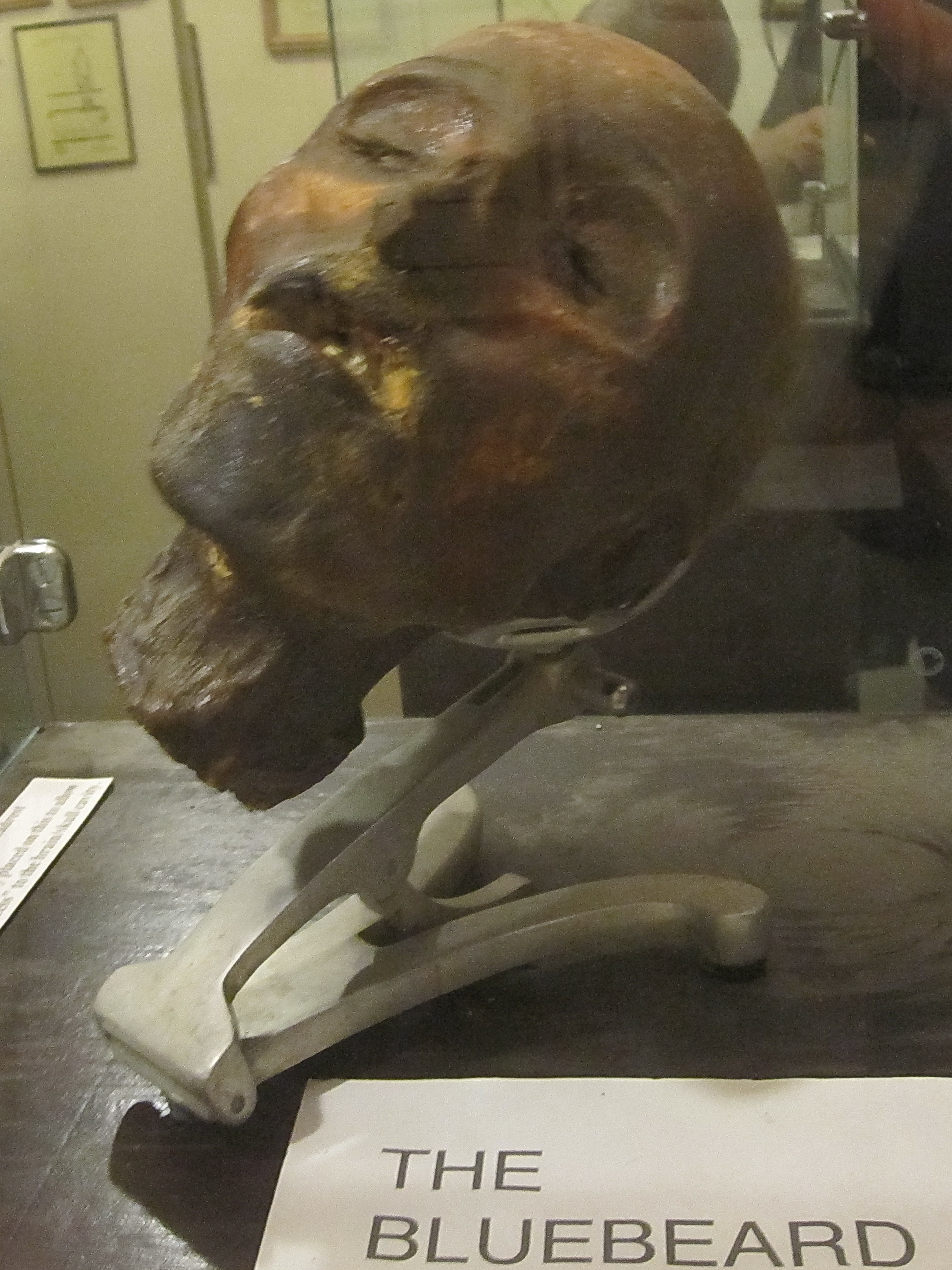 Photo of the mummified head of Henri Désiré Landru in The Museum of Death, Hollywood, California, US.

When the trial was over – Landru presented his lawyers with some framed art he did while in prison. Many years later someone discovered a confession hidden in the frame.

William Orpen attended the Landru trial as did many of the Press, there was a strong appetite in France for sex and murder in post war times.

This sketch of Landru by Sir William Orpen (29th Nov. 1921) was reproduced in the Daily Mail.

“His long, thin nose gives remarkable character to his face, and it is seldom that one finds a nose which narrows so noticeably above the nostrils.

“I cannot say that he has to my mind the appearance of a criminal. His dominant expression seems to me to be one of kindliness and, in his lucid intervals, I have no doubt that he is a man of amiable disposition.”

Now back to ‘The Black Cap’.

Sir James Stirling by Sir William Orpen. Reproduced with the permission of the Honourable Society of Lincoln’s Inn.

Stirling, (a native of Aberdeen) demonstrated an exceptional ability in mathematics, becoming Senior Wrangler at Cambridge in 1860, regarded at the time as “the highest intellectual achievement attainable in Britain”. He was a High Court judge in the Chancery Division from 1886 to 1900 and a Lord Justice of Appeal from 1900, when he was made a Privy Councillor, until his retirement in 1906. He continued to pursue his scientific and mathematical interests during his legal career, and after retiring from the bench became vice-president of the Royal Society in 1909–1910. He was married in 1868 and knighted in 1886.

Stirling collected his portrait from Orpen’s studio but never retrieved his full-bottomed wig, together with a black silk damask gown, trained and heavily embellished with gold embroidery, over court coat, lace cuffs and jabot, black breeches, stockings and buckled shoes.

Orpen later used the items as props for ‘The Black Cap’ in which he depicts an old decrepit judge heading to court to pass the death sentence on a man a fraction of his own age (see Orpen’s letter to Straus below).

The portrait of Sir James Stirling was presented to The Honourable Society of Lincoln’s Inn, London in 1951 by a Mrs. Shaw. I assume she was a member of his family since at the time of his entry in the supplement volume to DNB (1927), the portrait is described as being in the possession of the family.

The first version of ‘The Black Cap’.

As I mentioned above, Orpen’s inspiration for ‘The Black Cap’ has been wrongly attributed to the Landru case and here’s why: –

Orpen did the first version of ‘The Black Cap’ around 1908 – long before Landru hit the news. It is refereed to in the catalogue below as ‘The Arrival of a V.I.P’ and in another as ‘Passing of His Lordship’  Sadly this painting is untraced but it was purchased by a Japanese shipbuilder and art collector – Kōjirō Matsukata (1865 – 1960). He was president of Kawasaki Shōzō.

A record of the original exists in this Japanese exhibition catalogue of Matsukat’s collection (1934) and in a letter to Straus by Orpen. 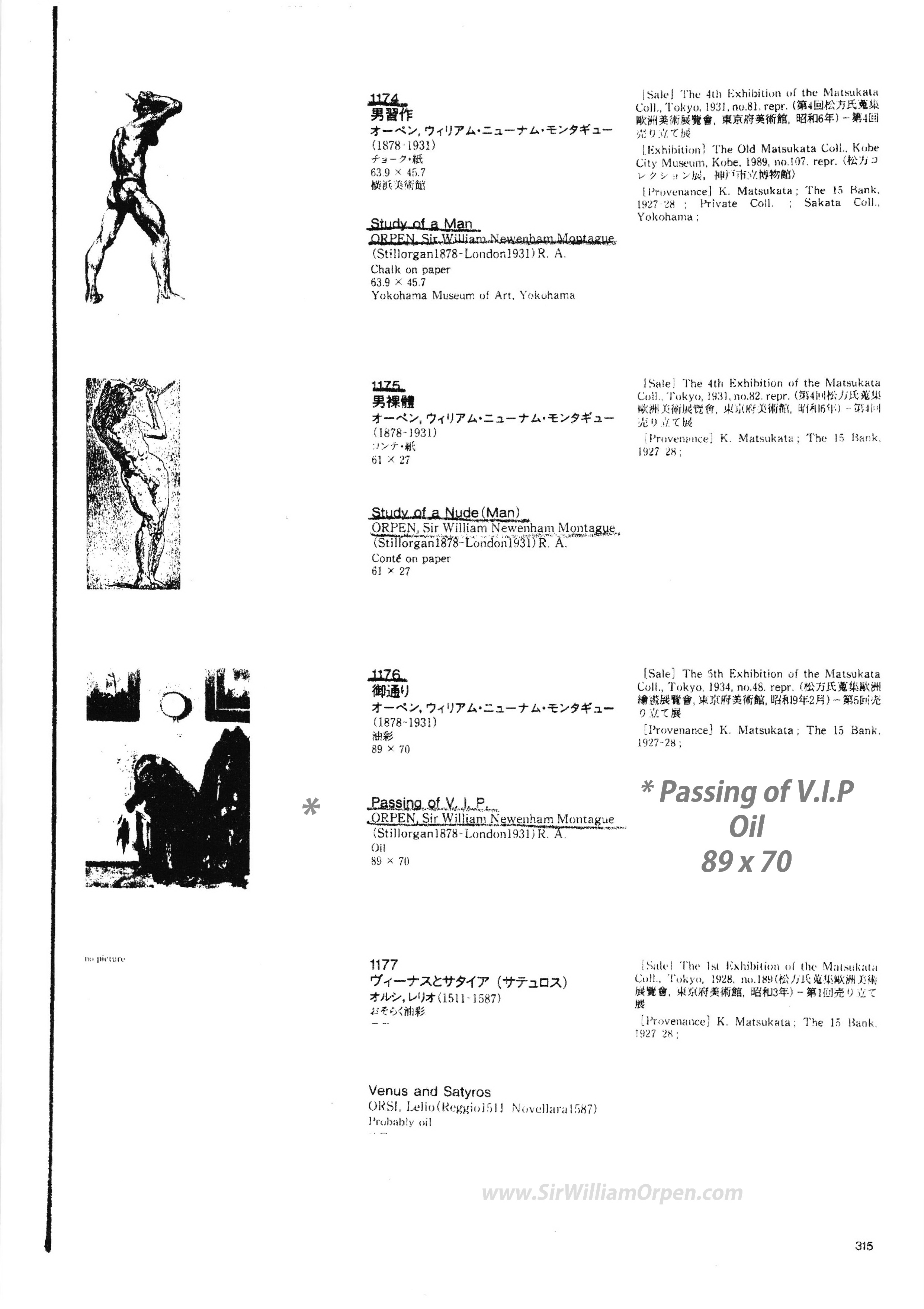 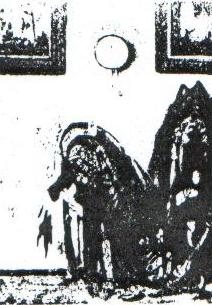 A section of Orpen’s painting showing an decrepit old judge carrying a black cap and his gown being carried by a Lackey. Notice the painting includes a framed picture on the wall of a man being hanged. Landru was executed by guillotine. 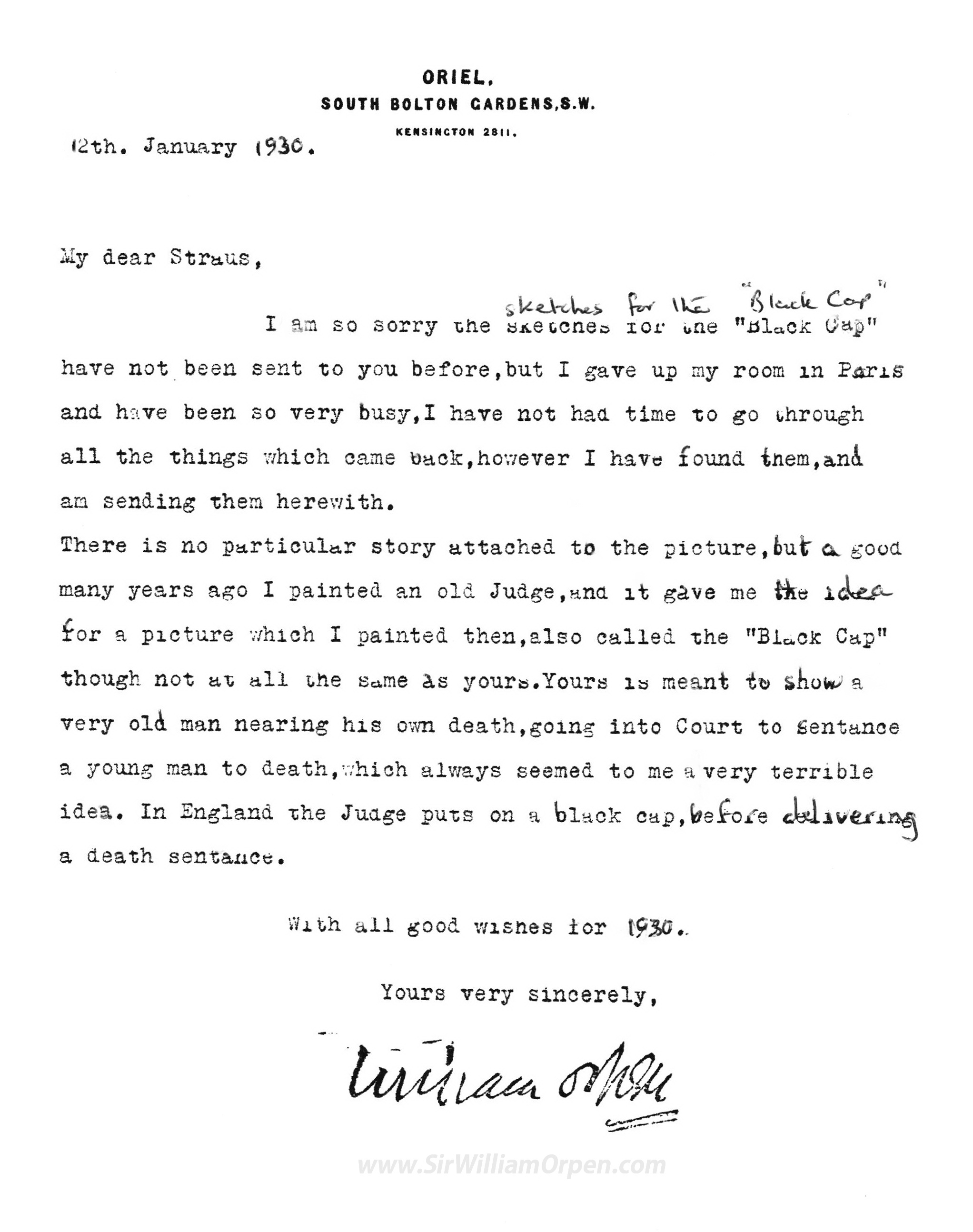 Orpen’s letter to Straus whom he had promised to send the sketches for ‘The Black Cap’.

The second version of ‘The Black Cap’.

By descent to Robert Straus.

Exhibited: London, Royal Academy, 160th Summer Exhibition, 1928, Number 161, as “The Black Cap or The Passing of His Lordship”.

This work is based on the ‘Passing of His Lordship’, which was painted circa 1908.

A selection of 5 of the 8 studies for ‘The Black Cap’ by William Orpen held at The Santa Barbara Museum. 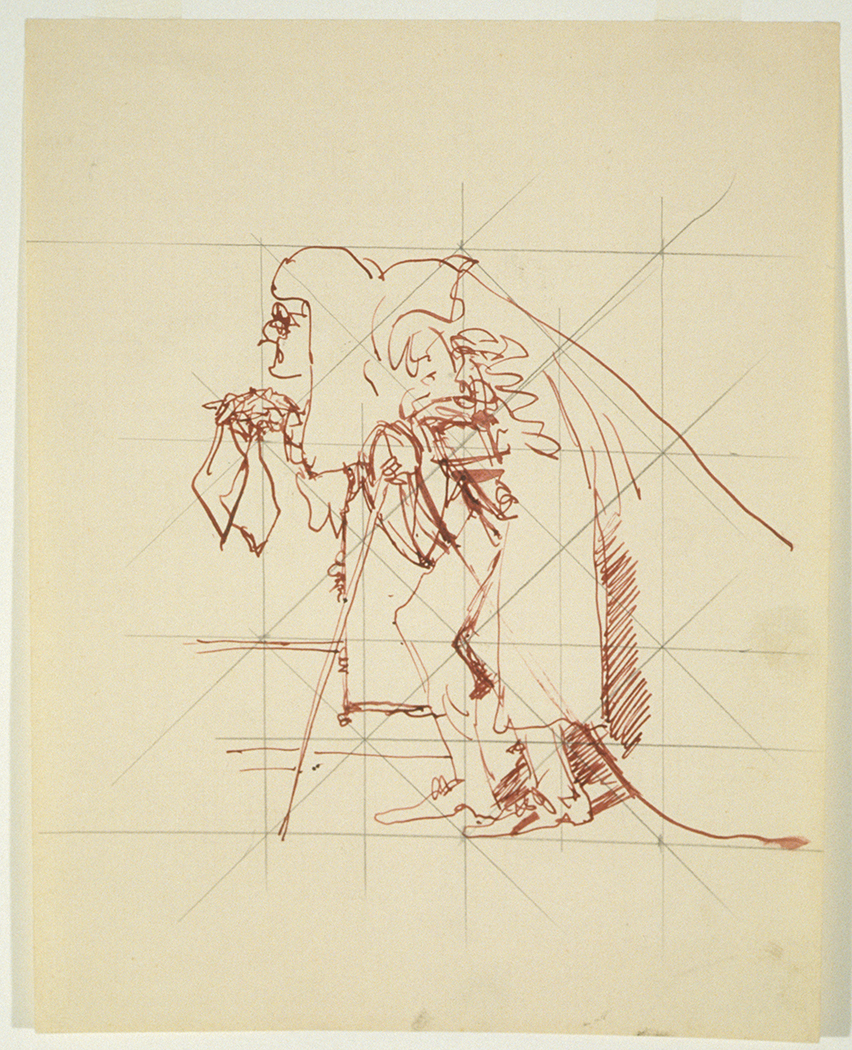 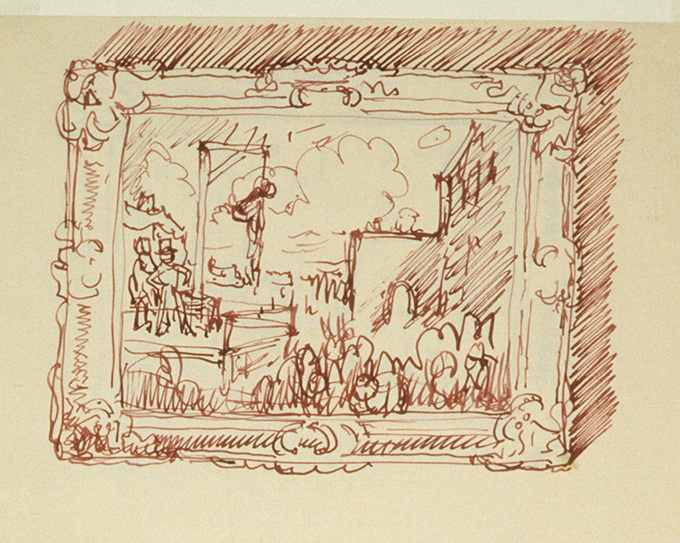 The Frame on the wall (a man being hanged). 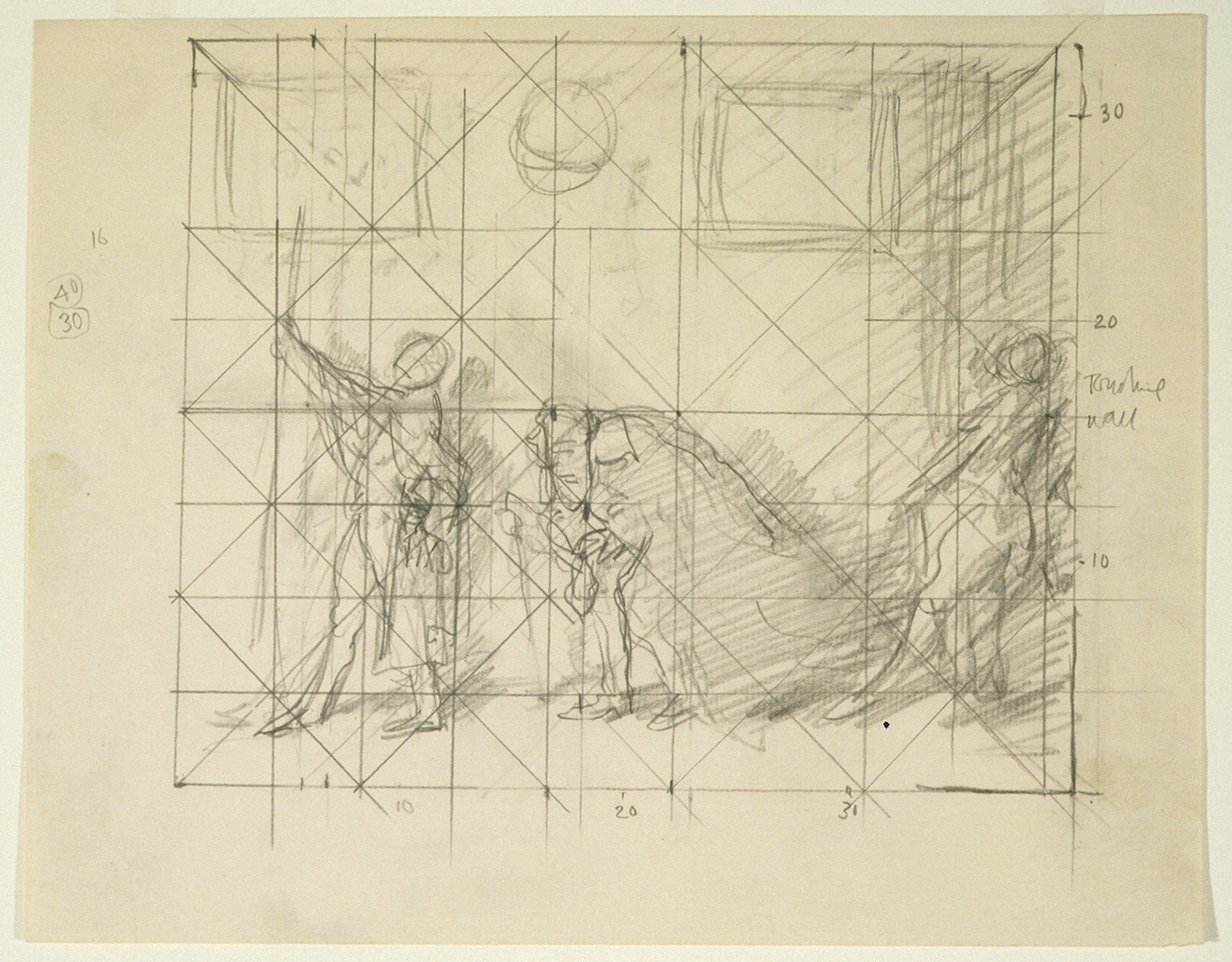 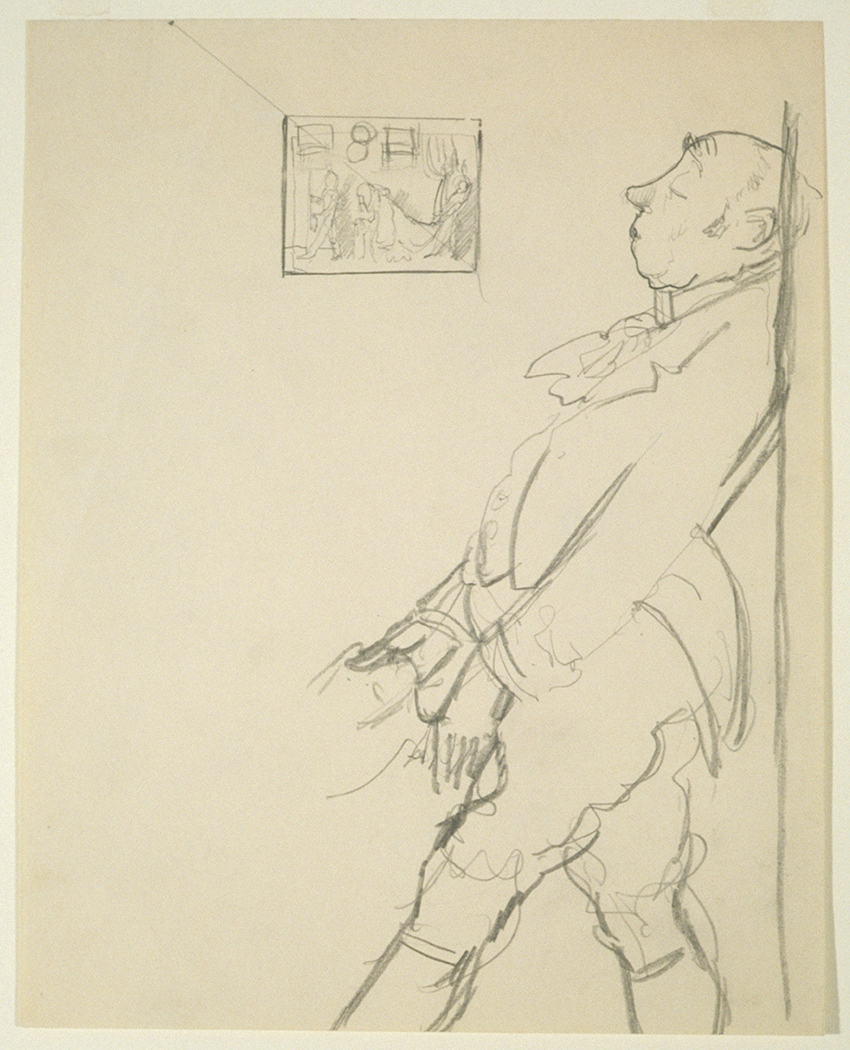 One of the Lackey’s. 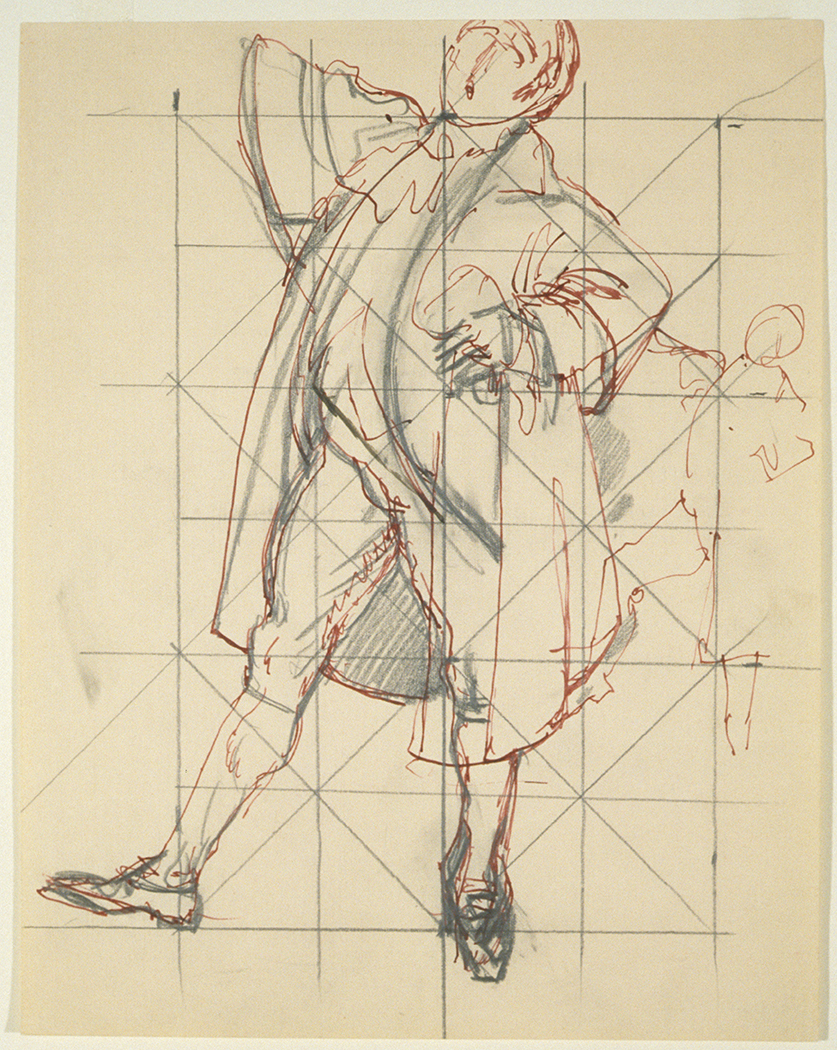 Newspaper articles following the exhibition of the ‘The Black Cap’ at the Royal Academy, 2nd April 1928.

“The Passing of His Lordship, an admirable design and colour scheme, and a curiously penetrating piece of satire. Followed by his pompous flunkey, an unwholesome over-dieted fellow, The Judge (a type) passes across the ante-room. Dyspeptic, acid, fragile; dangling the black cap from a feeble hand; in rich black robes, with ashy face and wig, he makes a wonderful design against the dreary wall.”

“Sir William Orpen is likely to create a mild sensation with his satirical ‘Black Cap’ in which the grotesque aspect of a grim subject is rendered with brilliance and audacity”.

“The Black Cap” is what is ridiculously called a problem picture, and reminds us (would that it would remind Sir William) that the painter of Mrs. Kendal always loses his way in his own problem. Not that the “problem” is very abstruse; it is a problem that would not puzzle a child.

Orpen abandons his mind to the task of depicting an aged and crumpled-up judge “snapped” as it might seem, on his way to the court-room, with a flunkey before, a flunkey behind (flunkey is a servant), and a picture on the wall behind him, of a man being hanged. Between the judges finger and thumb is one corner of the black cap. The picture is well enough painted, but is unpleasant as combining the trivial with the tragic. It is unlikely that a man of Orpen’s sense and sensibility really believes that judges make up their minds beforehand like that and relish in and gloat over the sudden extinction of life; yet if the painting means anything it means that. Orpen is almost sincere, but here he proves himself capable of what Mr. Shaw calls somewhere “silly clever”.

A Poor Academy. Few Outstanding Pictures, A MILD ORPEN SENSATION – Tiny mention of the “mild sensation” which will be caused by Sir William Orpen’s ‘The Black Cap’.

Landru was the inspiration for Charlie Chaplin’s film Monsieur Verdoux (1947). 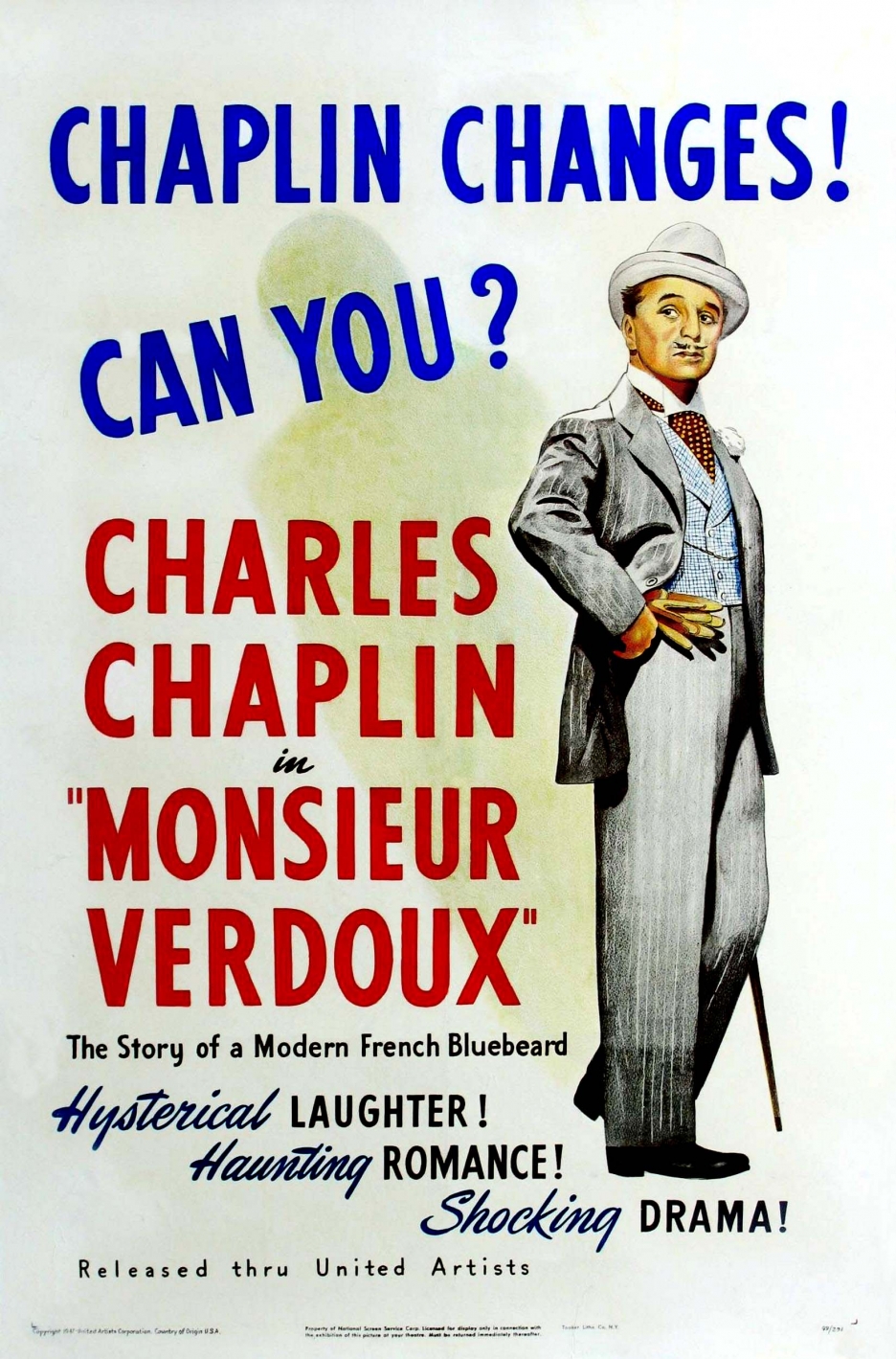 Poster for Monsieur Verdoux is a 1947 black comedy film directed by and starring Charlie Chaplin.

And just for good measure, here’s a watercolour of Charlie Chaplin by William Orpen. 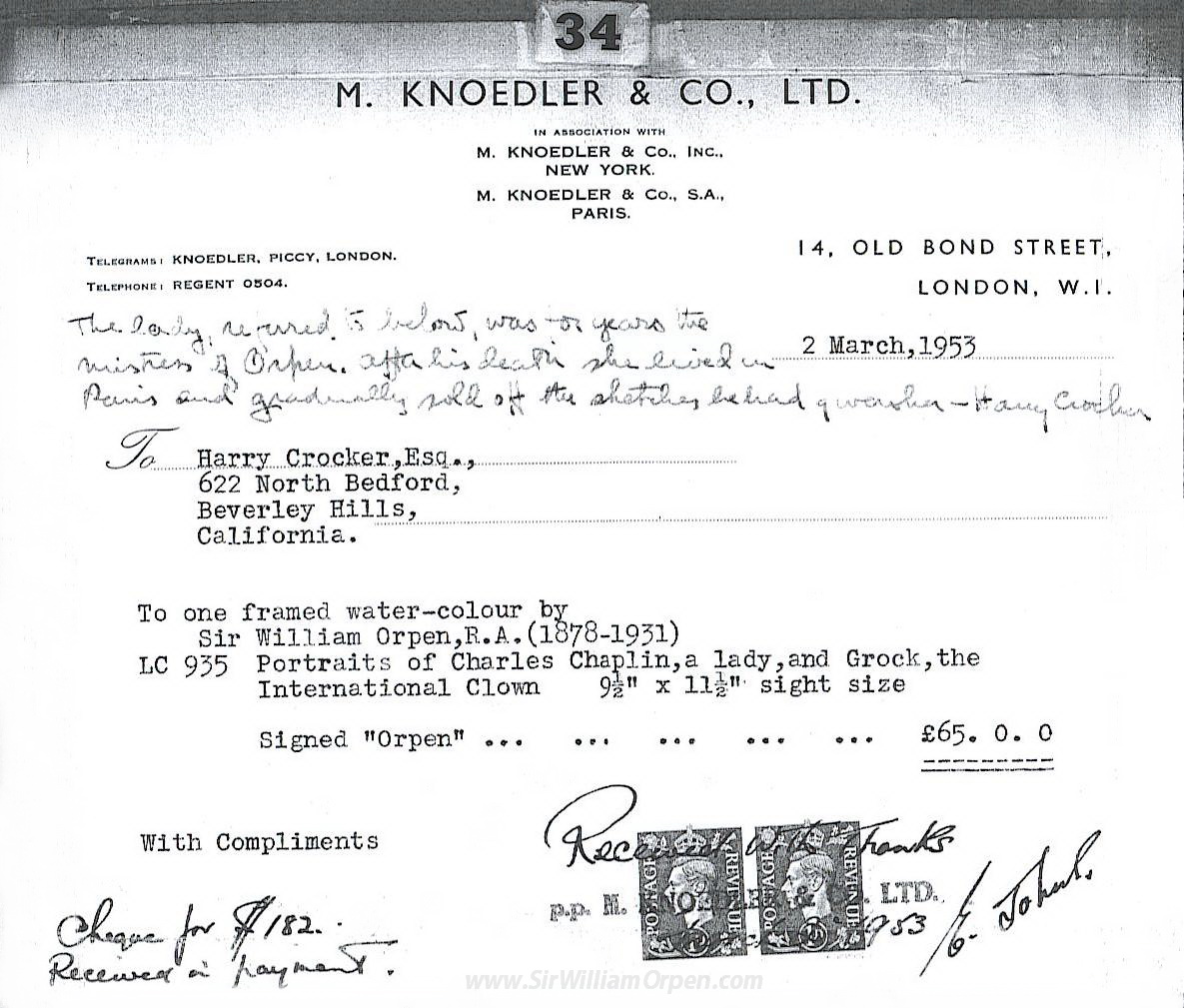 The grand parents of Robert K Straus – Jesse and Ida Straus perished aboard the Titanic in 1912. Ida was offered a seat in a lifeboat but refused to leave without her husband, reportedly saying, “Where you go, I go.” They both perished. Robert K Straus was a co-founder of Macy’s store, he was also a publisher of trade magazines.

Seth Smith Brothers – Warehouse Fire at Motcomb Street, Knightsbridge on 8th Oct 1939 listed the loss of a collection of Matsukata’s (not including the original ‘Black Cap’. 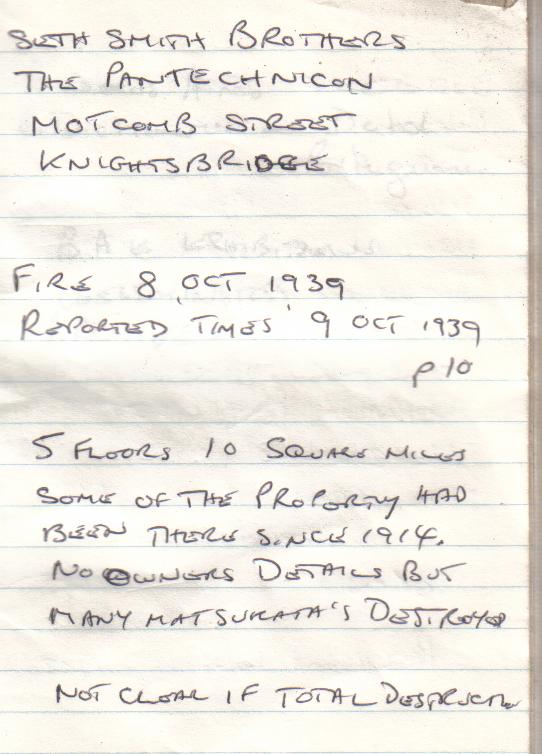 There was a Pub in Camden Town, London called The Black Cap. it was a favourite haunt of two other serial killers, Dennis Nilsen, who used it to pick up his victims, and Anthony Hardy “The Camden Ripper.” It closed in 2015.