The Beggar Girl by William Orpen.

Thomas Howarth, Westmoreland, England (by 1932) (Purchased from above).

In September 1904, Orpen accompanied his friend, the art dealer and connoisseur, Hugh Lane, to Europe on a buying expedition to acquire works for Lane’s project – a Modern Art Gallery for Dublin. The tour took them first to Paris and then to Madrid and finally back to Paris. As Lane’s forte was the Old Masters, Orpen went along ostensibly as a guide and adviser in the field of modern European art. However, for Orpen, who had for years been studying images of the Old Master paintings whilst learning his trade at the Metropolitan School of Art in Dublin and then the Slade School of Fine Art in London,  it was an opportunity to come face to face with works that until then he only knew from reproductions. He embraced them like old friends, and their sight did not disappoint. In letters to his wife from Madrid, he enthuses ‘We have seen the Prado! We have seen San Fernando! And I have no great wish to see anything more here except these two again and again till I leave …’ and: ‘I have spent nearly the whole morning looking at Goya’s. they are the most amazing things I have ever seen all wonderful [sic]in paint and composition…’; and again : ‘I am learning so much from Velasquez and Goya that I am nearly off my head with excitement.’[1]

Orpen returned to London with renewed vigour for his art, and an almost insatiable desire to translate the experience into paint. What followed throughout 1905 and into 1906 was an explosion of energy and a willingness to explore and assimilate the techniques of the Old Masters, mainly, but not exclusively, inspired by the Spanish artists such as Goya, Velasquez, Pereda, Ribera etc., with a zest not matched since his Slade days when he drew on the likes of Watteau, Hogarth, Goya, Rembrandt and Chardin, culminating in his master work of that period, the Play Scene from Hamlet 1899 (Private Collection), which was awarded the Summer Prize for Composition.

Coupled with this was Orpen’s good fortune and inspired choice of  a number of remarkable models, both male and female, he found at that time. Foremost among these were Mr. Green and Lottie Stafford of Paradise Walk. The result was several series of  significant and mature works. Mr. Green featured in  ‘The Saint of Poverty’, 1905 (Glasgow Museums and Art Galleries) and ‘The Flycatcher’, 1905 (Private Collection) with their echoes of Ribera. Chief among the influences for several Lottie Stafford works, portrayed as a washerwoman was Chardin. Such works included ‘At the Tub’, 1905 (National Gallery of Canada, Ottawa, and ‘The Wash House’, 1905 (National Gallery of Ireland, Dublin) and the half-length ‘Resting’, 1905 (Ulster Museum, Belfast). The working class characters were devoid of idealism. Their ‘lived-in’ hands and  character-ridden faces permitted a display of virtuosity, emphasising well-worn skin stretched over muscle and bone and conveyed, for the most part, in an earth-based palette.

It is into such groupings that the present work, ‘The Beggar Girl’, falls. Orpen’s revitalised ardour for the Old Masters caused him to revisit other schools, seeking inspiration not only from the Spanish, but from the French in the guise of Chardin, and also from the Dutch Masters. He had looked at the Dutch before, with his early New English Art Club submissions such as ‘The Mirror’, 1900 (Tate) in which P.G. Konody found echoes of Metsu and Terborch[2], but now he turns to Frans Hals. Whether it was the compositional influences that inspired the choice of model or the model that inspired the compositional influences, is not certain. Although the identity of the model in ‘The Beggar Girl’ is not known[3], her unusual and striking features, especially her teeth, may have been the catalyst for a composition reflecting Hals’ works. Her looks and expression have a remarkable resemblance to Hals’ ‘The Laughing Boy’ (Tête d’enfant), circa 1625 (Mauritshuis Royal Picture Gallery, The Hague). and possibly ‘A Young Fisherman of Scheveningen’ (National Gallery of Ireland, Dublin). Since the latter work was acquired by the gallery in 1881, resemblances would not have been lost on Orpen.

‘The Laughing Boy’ by Frans Hals. 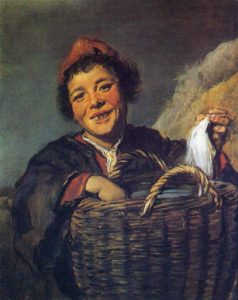 ‘A Young Fisherman of Scheveningen’ by Frans Hals.

He may then have drawn on two other of Hals works, ‘The Gypsy Girl‘ (La Bohémienne), 1628-30 (Louvre, Paris), for pose and ‘Malle Babbe’, c 1635 (Gemäldegalerie, Berlin), for the palette and technique. Thus in Orpen’s ‘Beggar Girl’, the application is looser and freer, and features such as the hands, are less detailed than those in the Lottie and Mr Green groups. Hals now stands in the same firmament as Ribera, Velazquez and Chardin. This is especially clear  when comparing The Beggar Girl, with Resting and the ‘Saint of Poverty’  – three paintings of half length figures with similar poses. These works are not merely an expression of prowess, of showing off, they remind us that Orpen’s education had not ended with the Slade.   His avaricious eye had been unleashed in the great collections of Paris and Madrid and in 1905 he was still honing his talent.

[3] It has been suggested that this may be the Artist’s Daughter, however the work is too early for this to be the case, as it also is suggested the the work dates to circa 1905, when the eldest child was three years old.