TAKING THE ORPEN NAME IN VAIN.

A Solicitor’s Clerk declares war on Sunday Cinemas and is branded a “Common Informer” (a legal term).

The actions in which Miss Millie Orpen is claiming penalties is under the Lord’s Day Observance Act, 1781. 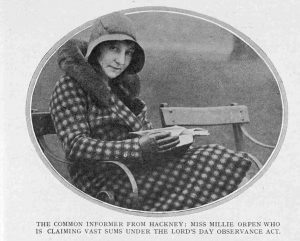 Photo: – Miss Milly Orpen, The Common Informer from Hackney: who is claiming vast sums under the Lord’s Day Observance Act.

In 1930 Millie Orpen sues many West End Kinema’s and newspapers containing their advertisements. Writs have been served on the Gaumont-British Picture Corporation, which controls the Tivoli, Carlton, Plaza, Empire, and the Rialto. New Gallery, Marble Arch Pavilion, Capitol, Astoria, New Victoria, and on Associated British Kinema’s, which controls the Regal and the Alhambra. The amount sought was £195,000 which is about €13.3 million today.

(The word ‘Kinema’ from the Greek word for ‘Movement’ was used then instead of Cinema).

Millie Lily Offenheim was born 5th Dec. 1909 in London. On 8th Dec. 1930, just two days before the court action she changed her name by Deed Poll to Millie Orpen. However, in 1933, she married Alex Rosenfeld using her original name ‘Offenheim’ (which implies that she changed her name back again) and thus became Millie Rosenfeld. Millie was the granddaughter of Russian Jews from Petrokoff – Mr. Leiza Offeinheim who married Miss Leiba Offeinheim, it must have been easier to call them Dedushka and Babushka! 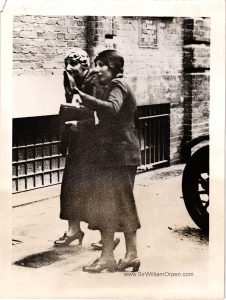 Photo: –  Miss Millie Orpen, who as a common informer is suing the Haymarket Capitol Limited, in London, England, for damages in opening their premises under the Sunday Observance Act which prohibits public entertainment in the Sabbath, made a hurried dash to her home, attempting to avoid pressmen and photographers, on July 15th., in London. Miss Orpen is shown above (nearest the camera) with her mother, as they arrived at their home.

In the first of the trials Sir Patrick Hastings for the defense who thought he could wrap it up as there was “no such person” said he would call one witness – Miss Millie Orpen.

A smart young woman, wearing a small black velvet hat and black dress, who answered to the name of Miss Millie Orpen, then entered the witness box.

Sir Patrick asked her: “You were until December 8th last Miss Millie Oppenheim”?

“Yes” was the reply.

“Did Messrs. Jacques, Asquith and Jacques witness it”? — “I think the witness was Mr. Jacques Cohen, the principal of the firm”.

Referring to the technical points which he pro­posed taking, Sir Patrick Hastings said that he was bound to raise them “because there are many actions of this sort in the atmosphere.”

“My reason for asking Miss Millie Orpen her name was that I was not aware that, two days before the issue of the writ she had changed her name by deed poll. I was going to make the point that there was no such person, but since she has given evidence I don’t think that point is open to me.”

Mr. Cohen, K.C. for the directors of the company, submitted that although the plaintiff might have proved that the Kinema was open on Sundays and that people paid for admission, she had not established—indeed there was not a wrap of evidence—that anybody was admitted.

Mr. Justice Rowlatt: “It would be a great reflection on the sanity of the persons paying the money to say that they did not go in”.

Mr. Cohen: “It may be that they were stricken with their consciences and did not enter the place”. (Laughter.) 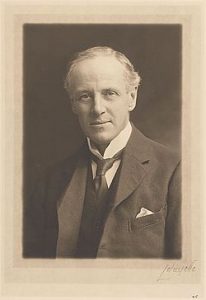 Millie Orpen won the first case but never collected her award of £5000 so it was most likely a test case to prove the stupidity of the law.

Messrs. Jacques, Asquith, and Jacques, solicitors, of Aldgate House, Aldgate, state that Miss Millie Orpen has renounced the penalties of £5,000. In a deed executed and delivered on Tuesday, Miss Orpen undertakes at no time in any way to enforce payment of the £5,000 or any part, and states that it has always been her intention utterly and completely to renounce and relinquish the penalties to the Haymarket Capitol, Ltd. The deed was handed in at the offices of Messrs. Lawrance, Messer and Co., who are acting for the Haymarket Capitol, Ltd., and bore the customary ten-shilling stamp. It was, according to Mr. Jacques, executed quite voluntarily by Miss Orpen, who is employed by Mr. Jacques’s firm.

In one case Mr. St. John Hutchinson, Counsel for the defendants, “Miss Orpen is a young person of Jewish faith. Surely, she cannot seriously be regarded as a champion of the Protestant Sunday”.

In another case against the Carlton Theatre Company on 13 October 1931, Mr. Justice Wright was informed that terms had been arranged and written on counsel’s briefs. The terms were not disclosed.

Stirred into action by Millie’s writ, The House of Commons then acted promptly – 18 December 1930.

On Tuesday Mr. Leslie Boyce (Unionist member for Gloucester) introduced in the House of Commons a Bill designed to prevent action by “common informers” with respect to alleged offenses against the Lord’s Day Observance Act, 1781. The Bill provides that: —

“No proceedings for the recovery of penalties under the Act shall be commenced without the consent in writing of the Attorney-General; and

“No prosecutions or actions for the recovery of penalties under the Act begun or pending at the date of the passing of the Bill shall be heard or continued without the consent in writing of the Attorney-General.”

The Bill was read a first time.

Final closure was achieved on Monday 19th October 1931, when Mr. C. Doughty, K.C., acting on behalf of Miss Orpen, applied for costs in respect of another case, which had “just escaped trial because on October 7, last [1931] Parliament passed an Act which has made the action void. However, the Courts still have the power to award to the litigant entitled to them, and I ask for the costs on behalf of Miss Orpen.”

In judgement Mr. Justice Rowlatt said “I have to award costs to somebody. It is kind of Parliament to say I can think at all.” (Laughter). He ordered that, the action having been automatically discharged, Miss Orpen should have her costs up to October 7 and including that day. She would have to pay the costs of the directors of the company whom she cited as defendants, and against whom she did not proceed.

In refusing leave to appeal, the judge remarked: “It is unnecessary. Let there be an end of it all. Parliament should have done it itself.”