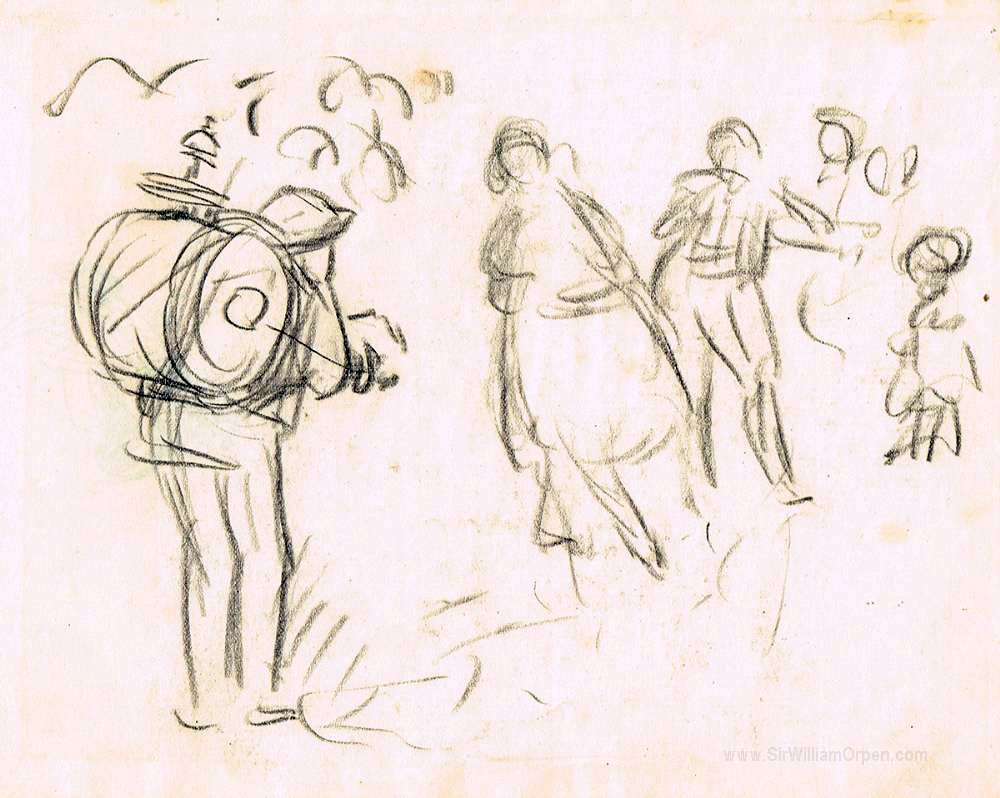 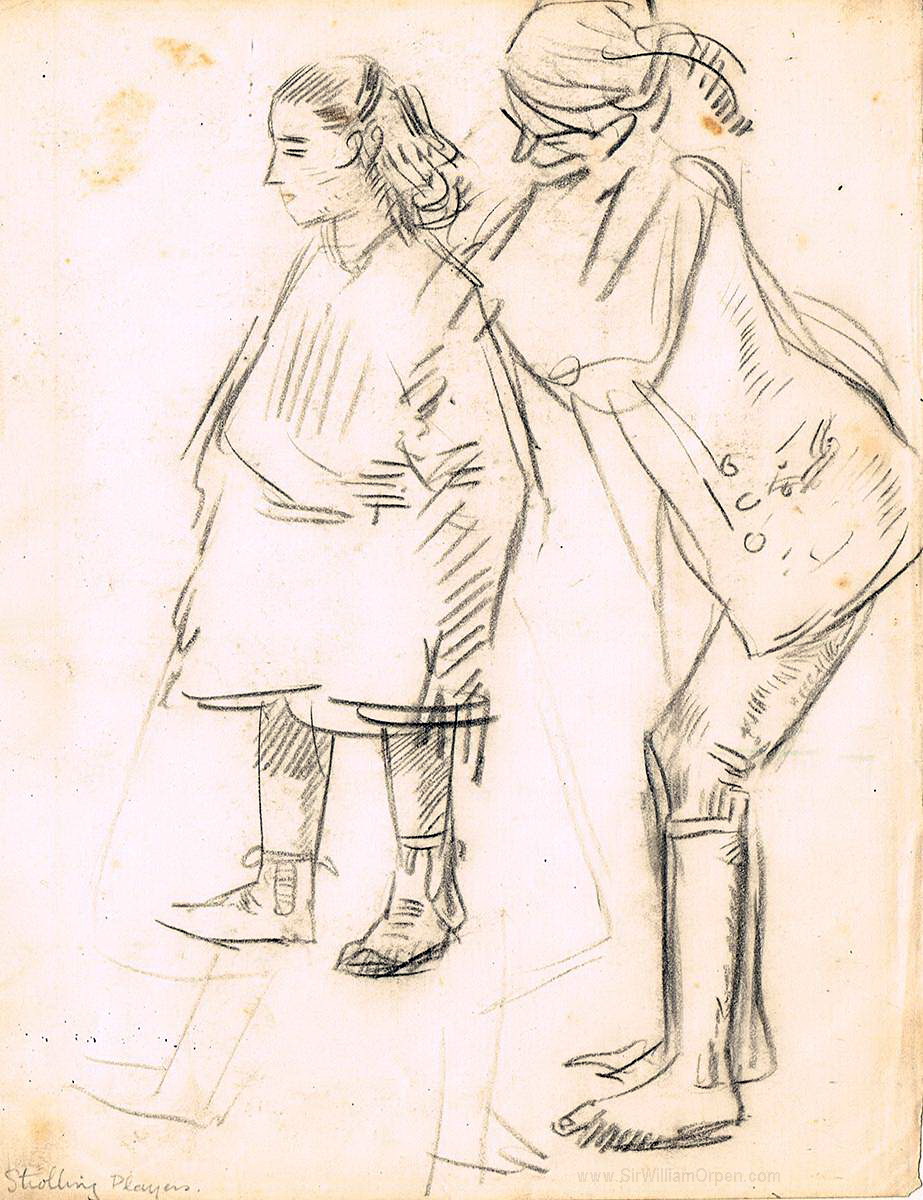 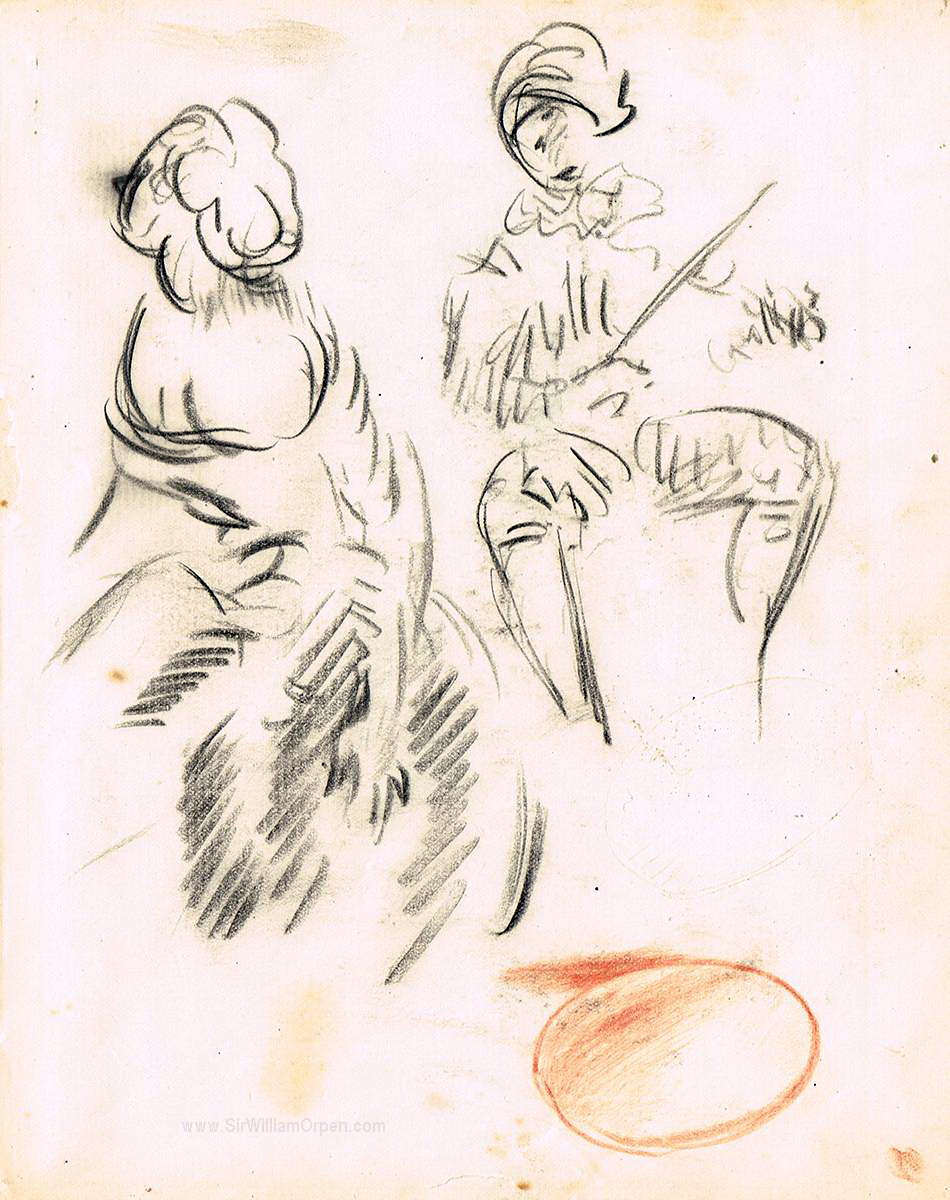 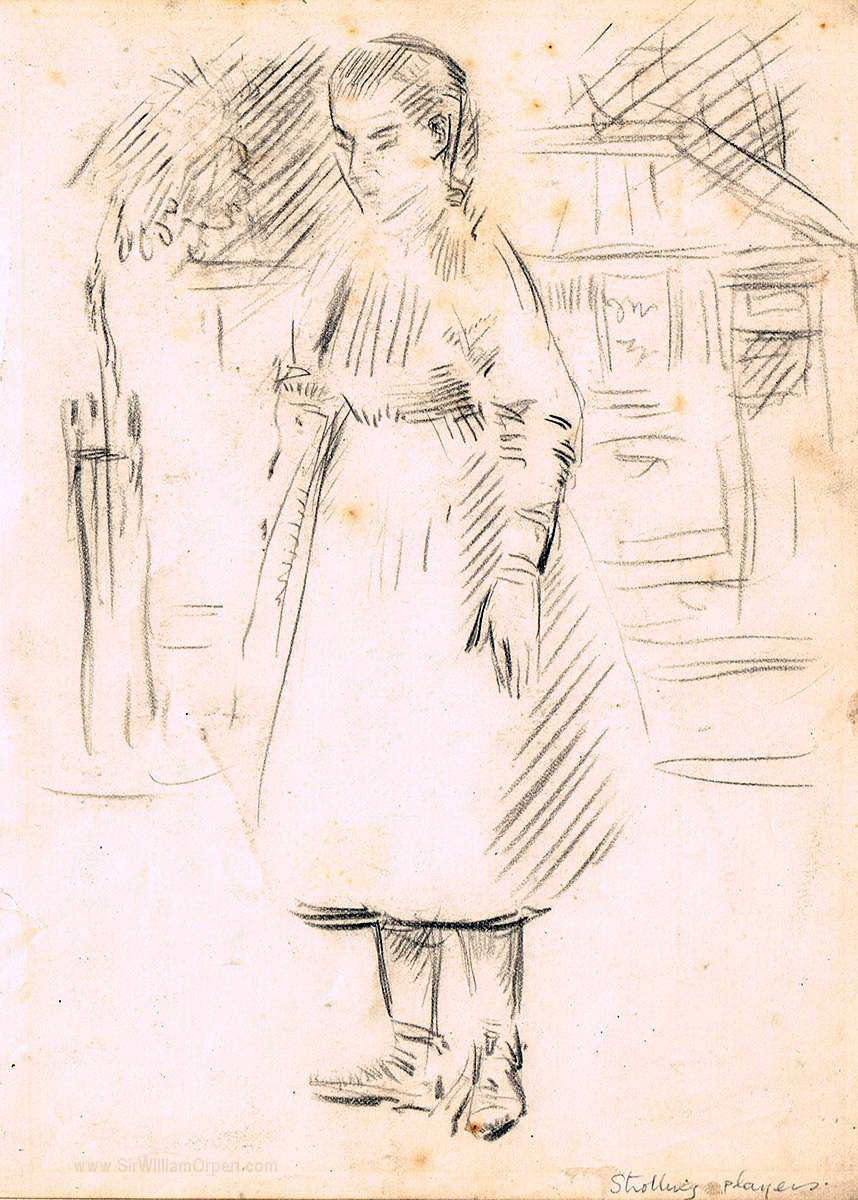 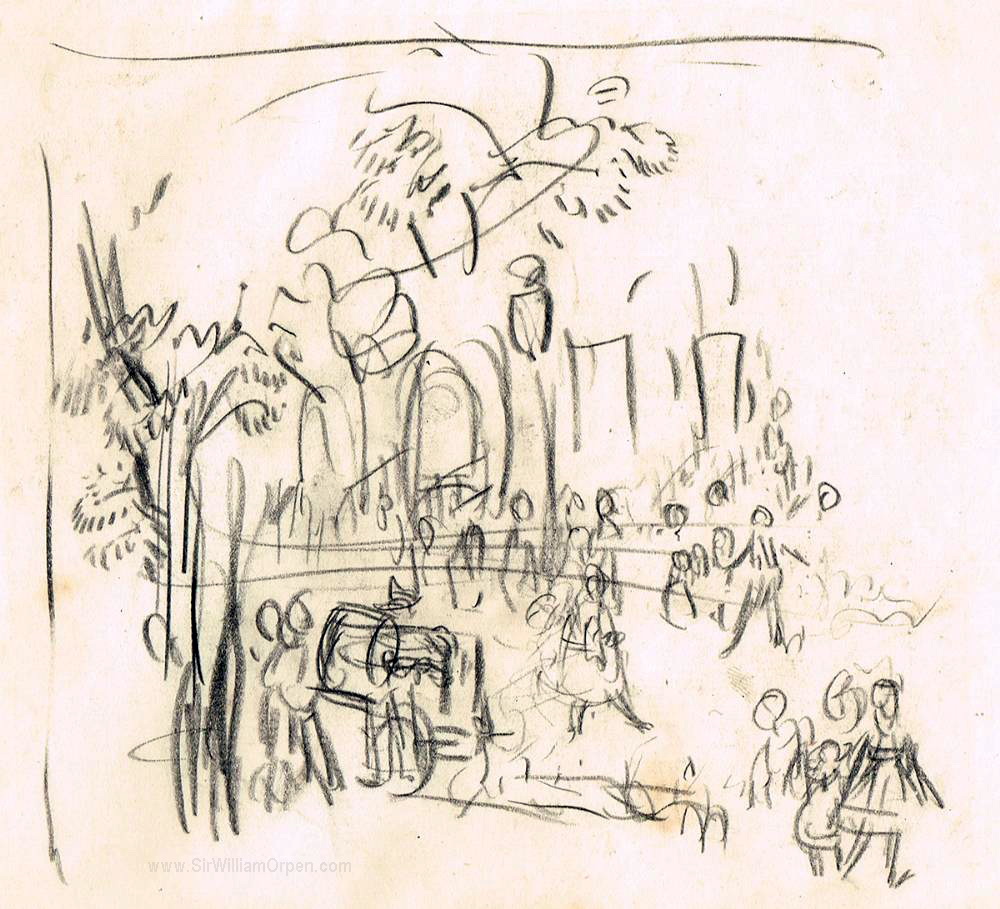 Note: Images beyond this point are not included in the auction.

Strolling players were traveling theatre groups in Tudor period in England, who toured the country delivering theatrical performances. They performed in barns and in the courtyards of inns. One of the most popular plays performed by these strolling players was Robin Hood.

When he arrived in London as a student in October 1897, the colourful street life of the capital caught Orpen’s eye. In this world, documented by Henry Mayhew and Gustave Doré, pedlars, costers, buskers and barrel-organists seemed to be on every corner, jealously guarding the most lucrative patches, before moving on (1). The subject matter appealed to several of the radical New English Art Club painters of the 1880s, including both Orpen’s future Slade School Principal, Professor Fred Brown, and in the 90s, his future brother-in-law, William Rothenstein (2).

The most transient of Mayhew’s itinerant groups were, however, little collections of strolling players who might find a square or courtyard, from which to command a crowd. Rothenstein tells us that when he first met Orpen, the young Slade student had become obsessed with such a troupe. These ‘street acrobats’ included ‘a strange, fascinating young girl’ who ‘might have walked out of the pages of Heine’s Florentine Nights, so elusively attractive was she.’ Before she disappeared, Orpen and his fellow student, Augustus John, ‘made many drawings of her’ (3). In the Irish artist’s case, the drawings fed into studies made at Sadler’s Wells Theatre which supplied the setting for his winning Slade ‘Summer Composition’, The Play Scene from ‘Hamlet’, 1899 (Private Collection) (4).

The present series of sketchbook pages begin with a swift sketch indicating the ensemble, showing two dancers, musicians and spectators under a canopy of plain trees. Further drawings detail a fiddler, a ‘one-man-band’ performer with a base drum attached to his back, a sketch of a girl standing close to a railed sapling in a London square, as well as other figures in costume – one, a barefoot ‘piratical’ figure. There is no evidence of the detailed studies that might be required for a full-scale oil painting, but were we looking for the ultimate première idée for the artist’s Improvisation on a barrel organ, 1902 (Walker Art Gallery, Liverpool), this would surely be the starting point.

Improvisation on a Barrel Organ by William Orpen (c. 1904).

All five sheets are drawn on the spot, in confident strokes sometimes employing patches of cross-hatching in place of line to indicate form – a practice advocated by Orpen’s teachers, Brown and Henry Tonks (5). Guided as much by instinct as intelligence, the crayon moves quickly over the page, carving out space and indicating a joyful event that is as spontaneous as the marks made to describe it.

Above text from Whyte’s catalogue.

Another sketch from the same series (not in this auction). 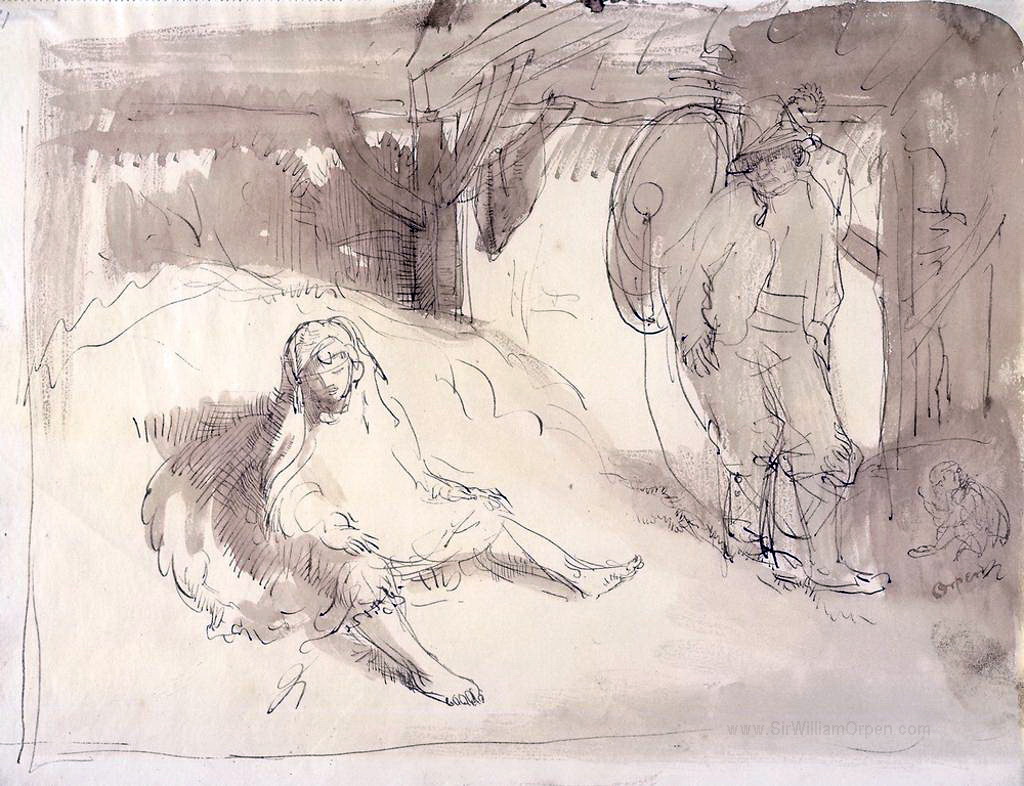