The eleven foot tall Bronze Sculpture of Sir William Orpen is now complete. It will be unveiled at The Talbot Hotel, Stillorgan near Orpen’s birth place by Ronnie Wood of The Rolling Stones who is a big fan and collector of Orpen’s work.

Sculptor Rowan Gillespie created the bust using one of Orpen’s famous self-portraits along with photographs of his Grandson – James Birkin and his Great Grandson – Danny Olivier.

(2) The self-portrait in mirrors represents his fondness for pictorial self-expression along with his fascination with mirrors.

(3) The nude of Yvonne Aupicq represents his fondness for the female form and the final piece will be a Still-Life.

(4) From a sketch by Orpen as a statue where he hopes that Dublin will see fit to honour him. 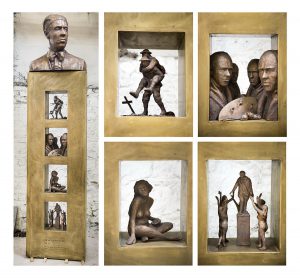 While there is an option for sponsors to have their name, company name or the name of a loved one engraved on a plaque beside the sculpture for €1000 you can make a donation of any denomination to:-

UPDATE: The sculpture was unveiled by Ronnie Wood of The Rolling Stones on the 18th Sept. 2018 at The Talbot Hotel Stillorgan.