In 1931, according to his Studio Book and his aide Cara Copland, Sir William Orpen painted from a photograph, as a present, a small portrait of Father Dermot Cronin’s mother. As this is the last entry in his Studio Book, it was probably one of his last works before the artist’s death on 29th September 1931. 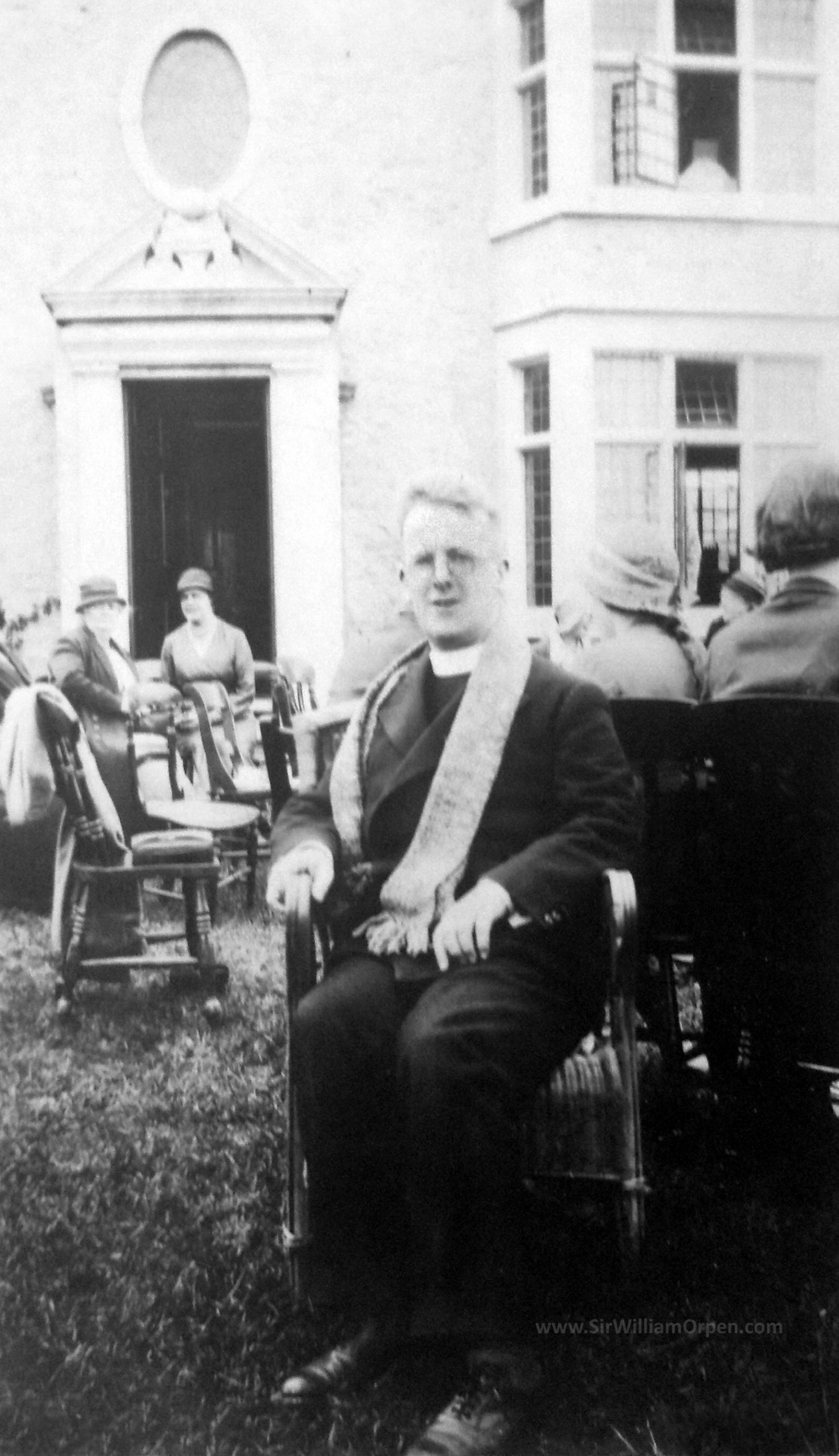 Father Cronin, the son of a Metropolitan Police Sergeant, was a Roman Catholic Priest, and a member of the Passionist Congregation, based at that time at St Joseph’s Monastery, Highgate Hill, London. His mother, Mrs Mary Cronin nèe Cassidy, had died the previous year on 4th June 1930. This could explain why the portrait was completed from a photograph, although at this stage, as Bruce Arnold comments in his book, Orpen was probably not well enough to receive sitters at his studio:-

“From 1929 onward, Orpen’s letters were generally typed, with additions written in afterwards. His handwriting began to deteriorate in the latter part of the following year, both in the studio book entries and in the footnotes to letters. At the time he was paying daily visits to the studio, but by the end of 1930 portrait commissions came to a halt. Given the general time-lag in payments it is difficult to pinpoint the exact time when his final illness prevented him from working, but it would seem to have been in the autumn or winter of 1930,” (Bruce Arnold: Orpen, Mirror to An Age, Jonathan Cape, London, 1981, page 438).

Arnold then goes on to say:-

“At around this time Orpen began to receive visits from a Catholic priest, and these became regular, and were daily towards the end. But he was not received into the Catholic Church,” (Arnold: page 438).

It would not be unreasonable to suggest that this Catholic priest was indeed Father Dermot Cronin, and the artist’s commemorative portrait of the priest’s mother in paint was a thank you to him, following her recent death. The fate of the portrait has not been traced.

Orpen’s wife Grace may also have had a part to play in the Orpen – Father Cronin story, for she has a remote connection with St Joseph’s Church at Highgate, run by the Passionists, and where Father Cronin was based at the time he was engaging with Orpen. Although Grace’s mother, Emily Knewstub nèe Renshaw, was originally baptised into the Church of England, in 1881 she decided to convert to Roman Catholicism, and at the same time offered up her children for conversion also. Consequently, as the family lived in the Highgate area, the three-and-a-half-year-old Grace was baptised as a Roman Catholic convert on 11 August 1881 at St Joseph’s Church, Highgate Hill, London. To what extent Grace embraced the Roman Catholic religion is unknown, but the connection may possibly have had some significance, although the extent, if any, so far also remains unknown.

Mary Cassidy was born about 1860 in Rotherhithe, Southwark, London, England, the daughter of William Cassidy, a publican, and Ellen Elizabeth Enwright. She is known to have had at least one brother and two sisters. She died on 4th June 1930 in 90 Dresden Road, Islington N19, Middlesex, England of (1a) Auricular fibrillation (1b) Myocarditis. There was no post mortem, and the informant was Maurice Cronin, her son. She married John Cronin, Metropolitan Police Officer, son of Jeremiah Cronin, a farmer, on 1st September 1881 in St Ann’s Roman Catholic Church, Albert Place, Whitechapel, London, England. He was born about 1859 in Kerry, Ireland (possibly Ennismore). He died on 16th August 1922 in Islington, London, England.

Prior to her marriage, Mrs Cronin lived with her parents in the East End of London – Shadwell, Tower Hamlets, Rotherhithe and Whitechapel. After her marriage she lived in Camberwell and Lewisham before settling in the Islington area by 1892. She had eight children, two daughters and six sons, one of whom was Edward Maurice Cronin (1894-1942), who took the religious name Dermot when he joined the Congregation of Passionists, and who became a Roman Catholic priest. At the time of Mary’s death in 1930, Father Dermot, as he was by then known, was living at the Passionist monastery of St Joseph’s in Highgate Hill, London, located just half a mile from where his mother lived at 90 Dresden Road, Whitehall Park, Upper Holloway, London.

He was one of eight children, having five brothers and two sisters. He lived with his parents in 104 Marlborough Road, Islington, London, England before joining the Congregation of Passionists (C.P.), when at the early age of 14 he left home for their Alumniate, which was at Carmarthen, Wales. From there he entered the Novitiate at St Gabriel’s Retreat, The Graan, Enniskillen, County Fermanagh, where he was clothed in February 1911, taking the name of Dermot of the Mother of God. After Profession and taking his first vows as a Passionist on 17 Feb 1912, his student years were spent first, by 1916, at St. Paul’s Retreat, Mount Argus, Dublin and afterwards, by 1920, at St. Anne’s, Sutton, St Helen’s, Lancashire, in which latter place he was ordained on 28th February 1920. Between 1921 and about 1924, he was posted to St. Mungo’s at 52 Parson Street, Glasgow. Between 1924 and about 1929, his name is absent from the list of Priests of Great Britain published annually in the Catholic Directory. Possibly this because it is likely during this period he was serving at St. Joseph’s, 50 Avenue Hoche, Paris 8, at that time. The Passionist’s Anglo-Hibernian Province was divided in 1927, at which point Fr. Dermot Cronin was assigned to the Passionists’ English Province – properly called St Joseph’s Province.

By about 1929, Father Dermot was back in England where between 1929 and about 1932 he was based at St Joseph’s Monastery, Highgate Hill, London. It was during this period that he was given a present of a small portrait of his mother, Mary, by the artist Sir William Orpen which he had posthumously painted from a photograph. Father Dermot was next stationed in St Mary’s Retreat, Vivian Road, Harborne 17, Birmingham, England between 1932 and 1935, after which he returned to St Joseph’s Monastery, Highgate Hill, serving between 1935 and 1938. In 1938 he returned to St. Joseph’s, Paris, but this time as Superior until 1939. On 12th July 1939 he arrived at Our Lady of the Sacred Heart, Herne Bay, Kent taking on the role of de familia, until he moved to St Saviour’s Retreat, 26 Leamington Road, Broadway, Worcestershire. From here he ventured out to undertake missions, retreats and supply to other churches. He remained at St Saviour’s until his death from a second heart attack in Cheltenham Hospital, on 19th December 1942, having collapsed at the foot of the refectory stairs at Broadway the result of a heart attack earlier that day.  He was buried at St Saviour’s Retreat, Broadway, Worcestershire, England.

The last entry in Orpen’s Studio Account Book, dated 1931, reads “Mrs Cronin (from a photograph) present” (Untraced). At this point the entry was not in Orpen’s own hand as he seems to have handed over the recording sometime in 1930 to someone else, probably Mrs Ellen Smyth, for want of a better description, his Studio housekeeper. When in 1932, following the artist’s death the previous year, his friend and carer, Cara Copland, compiled a list of pictures and drawings, based mainly on the Studio Account Book, she expanded on the Studio Book entry to read “Cronin, Mrs – small portrait from a photograph for son 1931” noting it as being in the possession of Father Cronin, St Joseph’s Retreat, Highgate.

When this is coupled with the following reference made by Bruce Arnold in his book “Orpen, Mirror to an Age”, Jonathan Cape, London, 1981, page 427, to Orpen having contact with a Roman Catholic priest, it is a strong possibility that this priest and Father Cronin are one and the same.

“At around this time Orpen began to receive visits from a Catholic priest, and these became regular, and were daily towards the end. But he was not received into the Church. His powers were failing, and he painted a poor full length of Pavlova, possibly from a photograph, and two religious works, ‘Eve in the Garden of Eden’ and ‘Palm Sunday’. They were shown in the Royal Academy in 1931.”

Photo of Sir William Orpen with his painting of Pavlova dancing on the beach.

In these last years and months, Orpen had become very spiritual. In his studio, re-vamped in 1929, he incorporated a small devotional chapel in a nook. 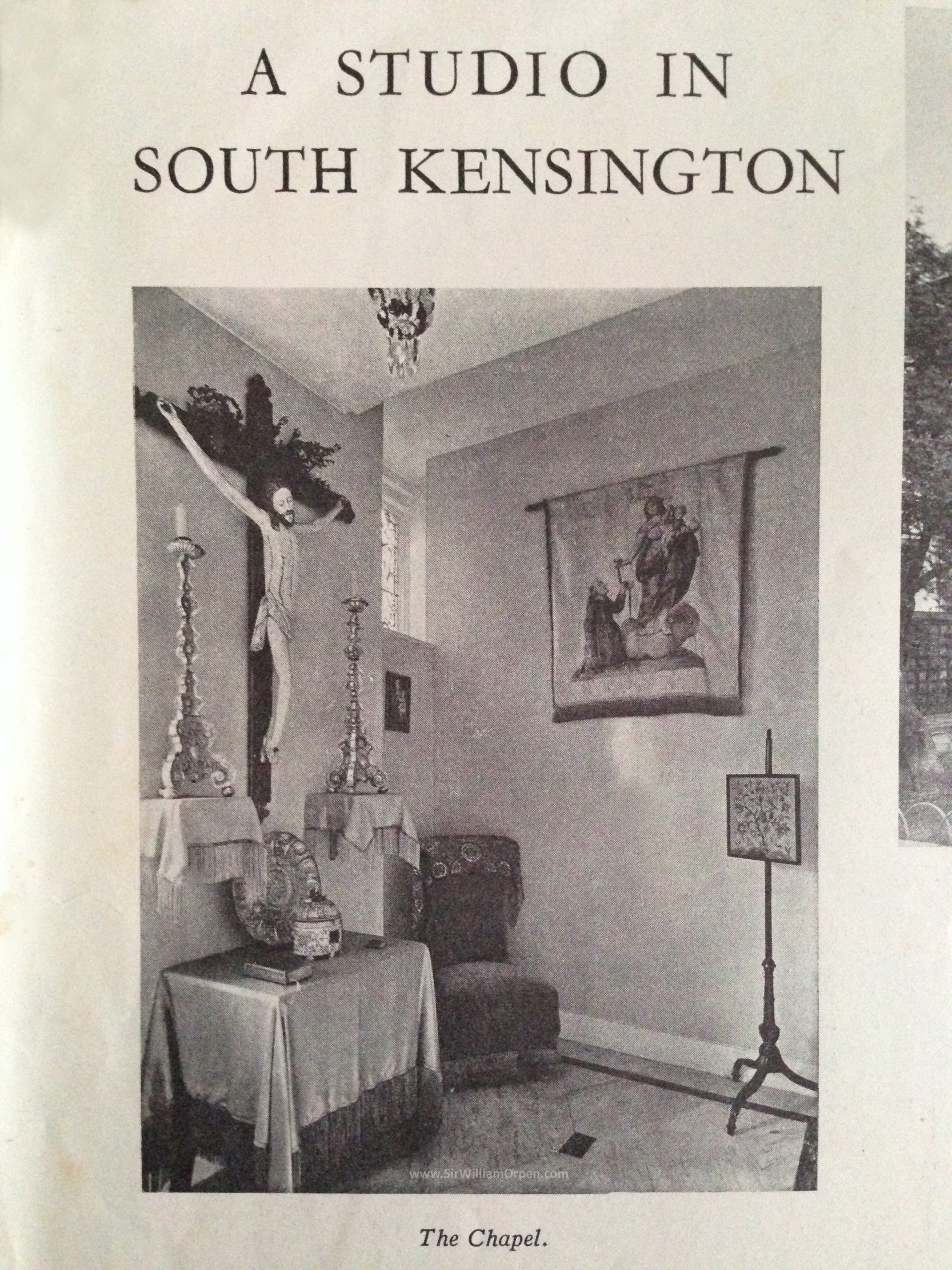 Could his experiences of the War and its aftermath, along with his failing health, be causing him to reflect on his life, on his mortality, and on what lay beyond his encroaching death as it began to start to loom large in his consciousness? If so, it would be entirely in keeping for him to discuss and explore such matters with a Roman Catholic priest. For someone such as Orpen seeking answers, Father Dermot Cronin C.P. (a Passionist brother) was a Roman Catholic priest of the right metal, character and authority. His Rector, writing his obituary in 1943, describes his character and attributes:- 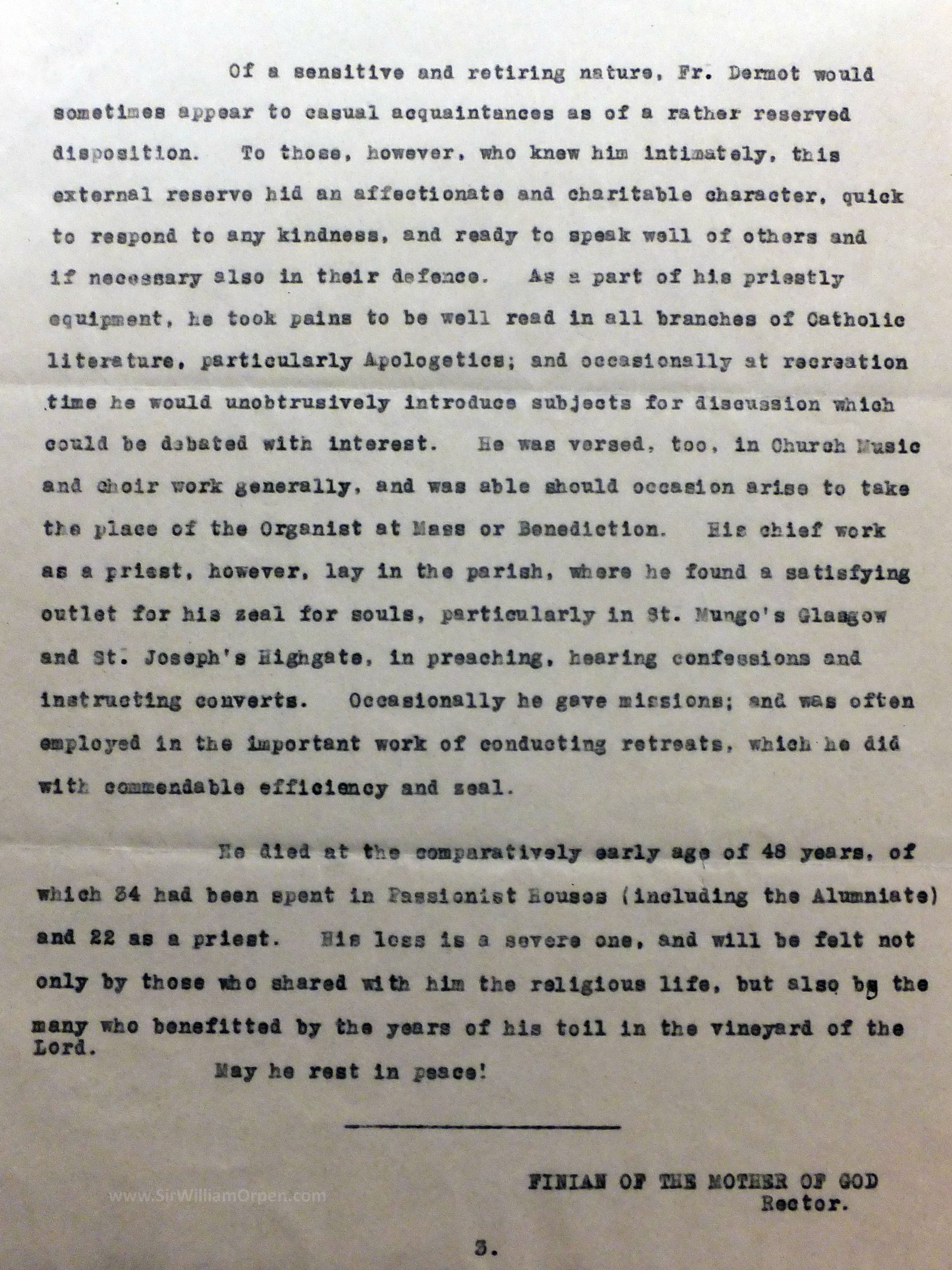 “Of a sensitive and retiring nature, Fr. Dermot would sometimes appear to casual acquaintances as of a rather reserved disposition. To those, however, who knew him intimately, this external reserve hid an affectionate and charitable character, quick to respond to any kindness, and ready to speak well of others and if necessary also in their defence. As a part of his priestly equipment, he took pains to be well read in all branches of Catholic literature, particularly Apologetics; and occasionally at recreation time he would unobtrusively introduce subjects for discussion which could be debated with interest. He was versed, too, in Church Music and choir work generally, and was able should occasion arise to take the place of the Organist at Mass or Benediction. His chief work as a priest, however, lay in the parish, where he found a satisfying outlet for his zeal for souls, particularly in St. Mungo’s Glasgow and St. Joseph’s Highgate, in preaching, hearing confessions and instructing converts. Occasionally he gave missions; and was often employed in the important work of conducting retreats, which he did with commendable efficiency and zeal.”

Throughout most of the second half of the 1920s it seems that Fr. Cronin was stationed in Paris, but sometime around 1929, he returned to England, where he served in St Joseph’s Retreat in Highgate, North London, until 1932, after Orpen’s death, the previous year.

It is also interesting to note that William Orpen’s daughter Diana (Dickie) converted to Catholicism following an accidental meeting with a Catholic Mystic – Caryll Houselander. This was shortly after her fathers death.