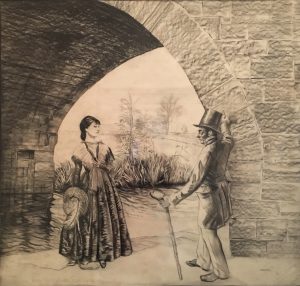 William Rowan Hamilton was a brilliant mathematician and professor of astronomy at Dunsink Observatory. He changed the course of modern algebra with his discovery of quaternions in 1843. Quaternions are a series of numbers used to describe points in a four dimensional space. The formula (i2 = j2 = k2 = ijk = −1) came to him in a flash of inspiration while walking with his wife Helen along the Royal Canal. The same formula was instrumental in landing a man on the moon. 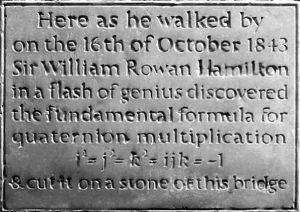 In 1958 a plaque was unveiled by An Taoiseach Éamon de Valera. It marks the spot where Hamilton carved the formula on the wall at Broom Bridge (also known as Brougham Bridge) with a pocket knife – “Nor could I resist the impulse – unphilosophical as it may have been – to cut with a knife on a stone of Brougham Bridge as we passed it, the fundamental formula”. 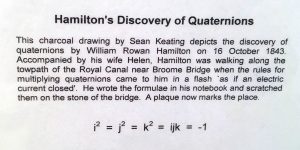 Sir William Rowan Hamilton (born at Dominick Street, Dublin 1805, died 1865). He was knighted in 1835 by the Lord Lieutenant of Ireland (The Earl of Mulgrave) and served as president of the Royal Irish Academy from 1837 to 1846. He had seven children, wrote poetry and was a close friend of William Wordsworth.