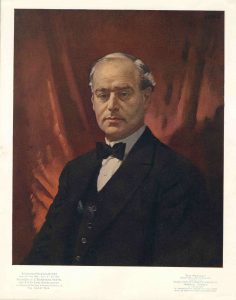 Facsimile copy of the painting of Sir Arthur Pearson by Sir William Orpen (1922).

The following text is from St. Dunstan’s Review (attached below) “An announcement we are now able to make will, we are sure, give the greatest satisfaction to every St. Dunstaner. It is that by the generosity of the V.A.D.’s and lady helpers of St Dunstan’s, a fund has been raised to defray the cost of providing facsimile reproductions in colours of the memorial portrait, one of which will be presented to every past and present man of St. Dunstan’s. In view of the fact that that it is hoped that the original portrait will eventually find a place in the National Portrait Gallery, it is good to know that every St Dunstaner will be able to possess in his own home, his own personal memorial of our chief”. 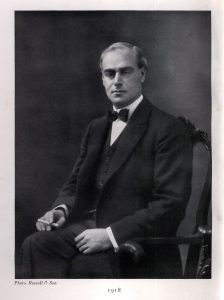 Provenance: By Subscription, the gift of nearly 2,000 Officers, Non-Commissioned Officers and Men of the Imperial Forces, unveiled at St. Dunstan’s Headquarters by the Duke of York. 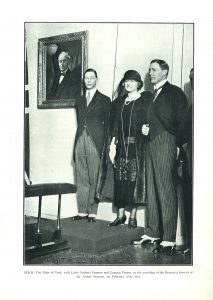 Photograph of H.R.H. The Duke of York, with Lady (Arthur) Pearson and Captain Fraser*, at the unveiling of the Memorial Portrait of Sir Arthur Pearson, on February 27th, 1923.

Orpen was commissioned to do the portrait by Lady Pearson and agreed a fee for far less than he usually commanded but interestingly there is no record in Orpen’s studio book of receiving payment for this work which may imply that he did not accept the money as it was from a charitable organisation. Orpen was very generous and had a strong empathy with the soldiers alongside whom he served in World War One. He was the only Official War Artist to publish his memoirs of WW1 – ‘An Onlooker in France’ (1917 – 1919) and he donated the proceeds of that book to war charities.

Sir Cyril Arthur Pearson, 1st Baronet, G.B.E. (1866 – 1921) was a British newspaper magnate. Beginning with C Arthur Pearson Ltd, he published his own popular periodical, ‘Pearson’s Weekly’, with its motto ‘To Interest, to Elevate, to Amuse’. He later founded the ‘Daily Express’ and purchased the ‘Evening Standard’. Born in Wookey, Somerset he had three daughters and one son. Blinded by glaucoma, he relinquished the newspapers to the Canadian born – William Maxwell Aitken, the first Lord Beaverbrook (1879 – 1964). Lord Beaverbrook was friendly with William Orpen, they met while Orpen was serving as an Official War Artist in World War One. He famously got Orpen off-the-hook when he was about to be court-martialed in 1918 over his controversial painting of his girlfriend Yvonne Aupicq – titled ‘The Spy’ then re-titled ‘The Refugee’. 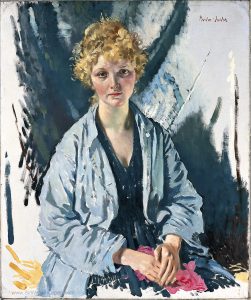 Lord Beaverbrook had been the proud owner of one of Orpen’s paintings titled ‘The Rape’ which also featured Yvonne Aupicq as the model. He bought it in 1954 for $750 (Knoedler & Company New York) with the title ‘Belgium 1914’. Oil on Canvas : 25 x 30 inches. Also known as ‘October in France’. 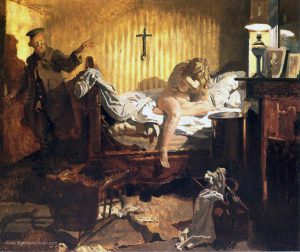 Sir Arthur Pearson founded St. Dunstan’s* in 1915 to train the blind to become “useful and independent citizens” with a special emphases on soldiers blinded by gas or bomb attack in World War One.

Pearson was created a Baronet (1st Baronet of St. Dunstan’s) in 1916 and awarded the G.B.E. in 1917 (Grand Cross of the British Empire). His son Neville Arthur Pearson (1898 – 1982) inherited the title 2nd Baronet of St Dunstan’s. The title became extinct upon Neville’s death.

Through the British and Foreign Blind Association, Arthur Pearson published his Pearson’s Easy Dictionary in Braille form in 1912. Later completely blind, Pearson was made president of the National Institution for the Blind in 1914. He also published Victory over Blindness in 1919 and Conquest of Blindness, 1921. He drowned in his bath when he knocked himself unconscious in a fall, he is buried in Hampstead Cemetery, London. 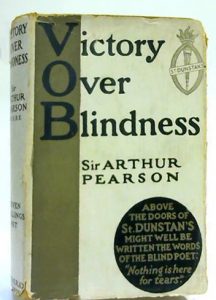 The Irish born Antarctic explorer Sir Ernest Shackleton worked for Pearson in 1903. He was a sub-editor on a literary magazine called ‘The Royal’, although he was hardly suited to a desk job and left after about three months. Shackleton returned to England from the Antarctic in May 1917 and gave a talk to the blind veterans around June that year. Sir Arthur Pearson was a close associate of Lord Robert Baden-Powell (1857 – 1941) who founded the scouting movement and who, in turn, was a friend of Shackleton’s wife, Emily. 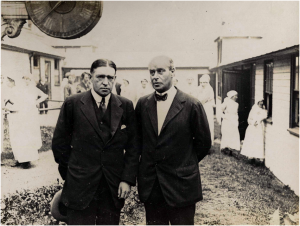 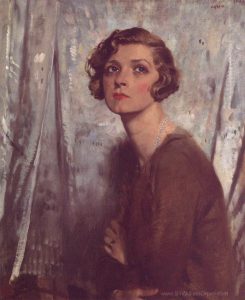 Orpen’s painting of Sir Arthur Pearson was exhibited at the Royal Academy of Art, Winter 1933, Retrospective of Works by Late Members, No. 102, as “The Late Sir Arthur Pearson, Baronet, G.B.E.” Lent by the President and Council of St. Dunstan’s. 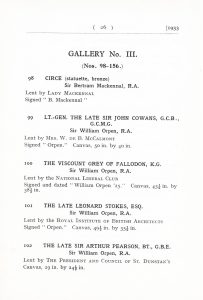 Dunstan’s Review, March 1923, ‘The Memorial Portrait to Sir Arthur: Its Unveiling at Headquarters by His Royal Highness the Duke of York’. 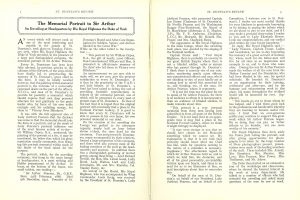 Footnotes: – The original painting of Sir Arthur Pearson is Oil on Canvas: 29 x 24½ inches is at the Head Office of Blind Veterans UK, 12-14 Harcourt Street, London.

Blog post by Dominic Lee with the assistance of  B.V.U.K.