Scene from the Arabian Nights by William Orpen – Christies

Lot 186: Scene from the Arabian Nights, probably ‘Noureddin and the Fair‘ by William Orpen.  One of six works by Orpen for sale at Christie’s London – Modern British Art Day Sale 18th June 2019.

Following text from Christie’s catalogue with other works from Arabian Nights added by Dominic Lee.

We are told that students at the Slade would gather round Orpen’s easel ‘to watch his extraordinary pencil in action’. Suave and stylish from the start, his life-room studies were models of good practice and he was not waylaid by the idealising tendencies favoured by fashionable painters of the nude. Indeed, his English Nude 1900 (Mildura Art Centre, Australia), of the same period as the present drawing, is positively Rembrandt-esque in its realism.

Orpen would have studied the Royal Academy’s winter exhibition in 1898 – 1899 devoted to Rembrandt, as all Slade students were advised to do. Similarities between the nude in Scene from the Arabian Nights and the Dutch master’s etching, Nude Woman seated on a Mound circa 1631, a print of which was already in the British Museum in the Irish painter’s day, are marked.

They extend beyond the crimped hair held back by a band, to the treatment of form. And here, even the turbaned Turk who leads her horse, recalls Rembrandt’s Orientalism.

It is likely that the present drawing was worked in the wake of this ground-breaking exhibition, as one of a series that address subjects taken from the Thousand and One Nights. Enormously popular in the 1890s, these ancient Persian and Indian tales, translated by Orientalists such as Edward William Lane and Richard Burton, opened the window on a culture that captivated the Victorians. The stories also fascinated Orpen, and after 1899 he produced a series of drawings illustrating scenes from the Thousand and One Nights. At least two are associated with the story of Nur al-Din Ali (variously given as ‘Nouriddin Ali’) a tale that exists in several versions in the Thousand and One Nights. Although settings change, all involve Nur al-Din Ali’s elopement, and his love for a slave girl who is subsequently sold. In one version she is the daughter of the Frankish King taken from Cairo to Alexandria; in another she is a slave girl brought to Basra by Nur al-Din Ali’s father. Further research may yet clarify the precise reference in Eastern myth, in which what may be a ‘fair Persian’ is led away by a Turkic figure, armed with a musket.

However, while the drawing combines Orpen’s native wit, with that of the Arabian Nights, its stylistic affinities reveal a maker whose eye is attuned to the nuances of form, as much as his hand is responsive to them.

Christie’s – We are very grateful to Professor Kenneth McConkey for preparing this catalogue entry.

Other scenes by William Orpen from Arabian Nights produced between 1899 and 1904 (not in the auction). 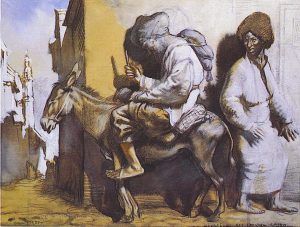 The Three Blind Men watched by the Thief (1901) William Orpen. 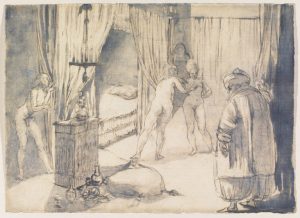 An Oriental Harem by William Orpen.

Study of the Sultan’s Head by William Orpen. 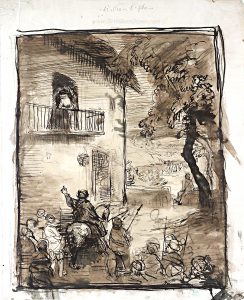 A Spanish Serenade by William Orpen. 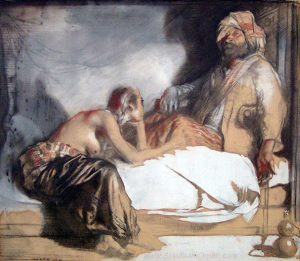 Ghreyardie and the Sultan by William Orpen (1901).