Looking through the windows: Exploring the connection between Reginald Bell and William Orpen.

On a recent visit to William Orpen’s old home and studio in Chelsea, I spotted a remarkable stained-glass window in the bathroom (see image below). Intrigued by its origin, I wondered if it could have been ordered by William Orpen from his friends at the Dublin Metropolitan School of Art. As you can see, the window depicts four Wyverns which supported the arms of John Churchill, 1st Duke of Marlborough (Vauxhall Motors had a model in its 50’s car range called the Wyvern). 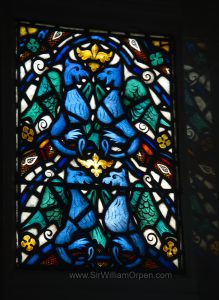 Orpen taught art to Beatrice Elvery and Margaret Crilly (who married Harry Clarke, the famous stained-glass artist). They created many stained-glass windows.  However, a couple of experts – Nicola Gordon Bowe – NCAD and Terry Bloxham – V&A Museum concluded that this window was probably from a later period. Interestingly, with a little more research, I discovered that Orpen had indeed ordered two stained-glass windows for his home from another friend – Reginald Bell. Neither of these windows is known to have survived. It’s possible that they were destroyed in the Blitz when a German bomb exploded in the house next door, smashing many of Orpen’s windows and his crystal chandeliers.

I began to do some more research on Reginald Bell. He was the only son of Mary and John Clement Bell (his sister was the sculptor Jeanne Bell). Reginald was born in London and educated at Harrow School (for which he subsequently created a window for their School War Memorial) and later studied art at Cope’s and Nichols’ Art School in Kensington. In 1907, he joined the family firm – Clayton & Bell which was founded in 1855 by John Clayton and Alfred Bell, makers of stained glass and ecclesiastical furnishings. Reginald served in WW1 (Artists’ Rifles) and was made a partner in the firm upon his return in 1918. At one stage, the firm was employing 300 staff working day and night shifts from premises in Regent Street, London.

The firm’s windows are known throughout the UK and worldwide, including Canada, US, New Zealand, Australia and there’s even one by Reginald Bell in the Anglican Church, Virginia, County  Cavan, Ireland, depicting Christ as the Good Shepherd (see Image 2). Thank you to Rev. Craig McCauley for the image. 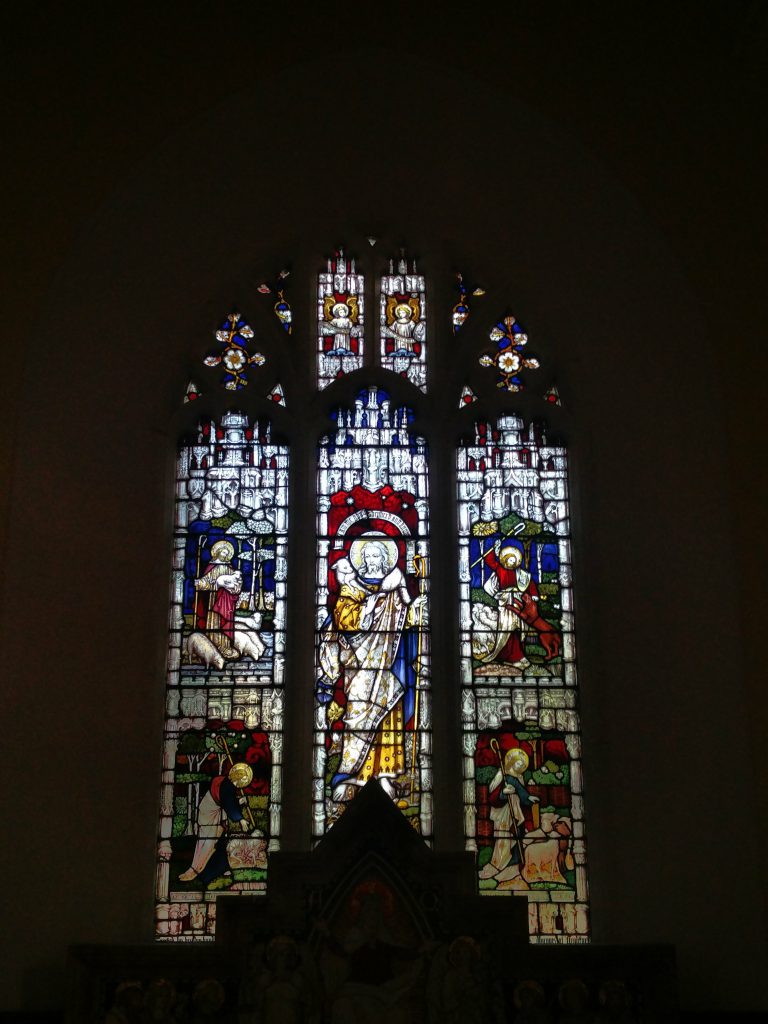 Maurice Drake wrote: – “Reginald Bell’s two light Victory Window in Salisbury Cathedral is one of the finest painted in England during the past 400 years”.

Unusually, Reginald Bell designed the window for the Chapel in Somerville College in Oxford before an architect was even found to design the building.

Reginald was a popular member of the Arts Club, 40 Dover Street, Mayfair. It was here he became a friend of fellow member Sir William Orpen who commissioned him to make the two mellow stained-glass windows for his house in Chelsea.

Image (3) from 1929 shows a glimpse of light coming from Reginald Bell’s windows in Orpen’s Chapel room which includes a pair of Russian church candlesticks, overlaid with silver, embossed and chased with rococo scrolls and shell ornamentation. A large ivory Spanish crucifix of the Seicento (art of the 17th century). There were also a few Fratelli Alinari photographs – two or three after Piero della Francesca. This room is now used as a bathroom. 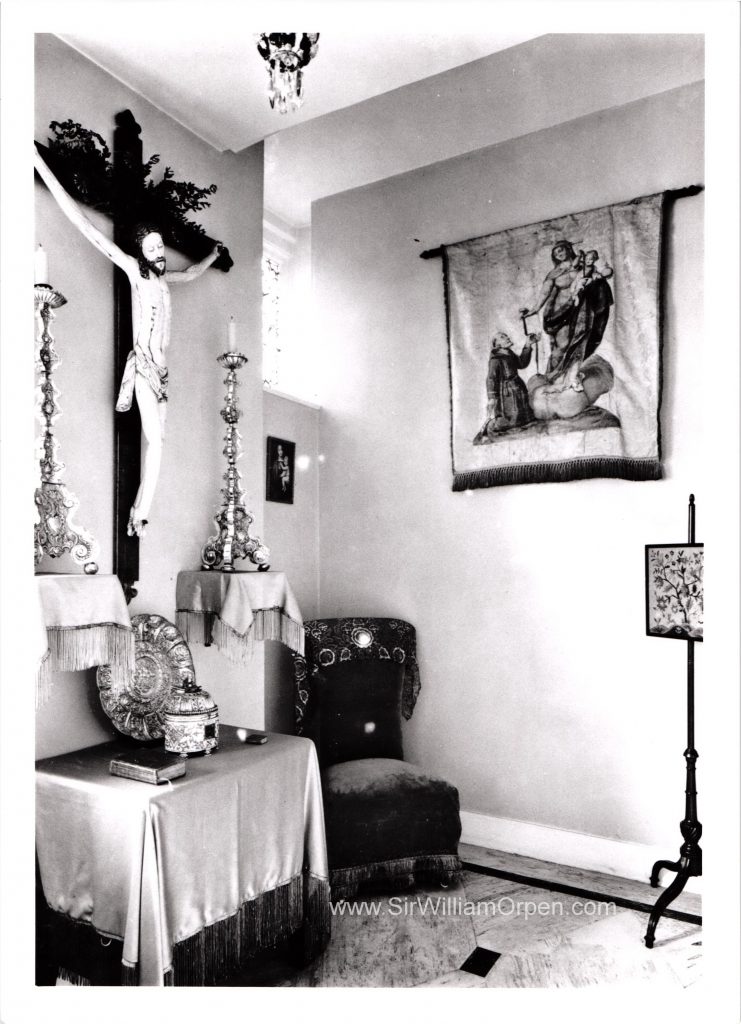 Image (4) is a clearer shot of the second window by Reginald Bell, it depicts a Bishop with his crosier (maybe even St. Patrick). This room is on the ground floor. Photo also includes an Italian X-shaped Armchair with gilt framework, red velvet seat and a back panel. The nude painting on the wall is by Francis Edwin Hodge (1883–1949), a friend of William Orpen and who also served as an Official War Artist in World War 1. 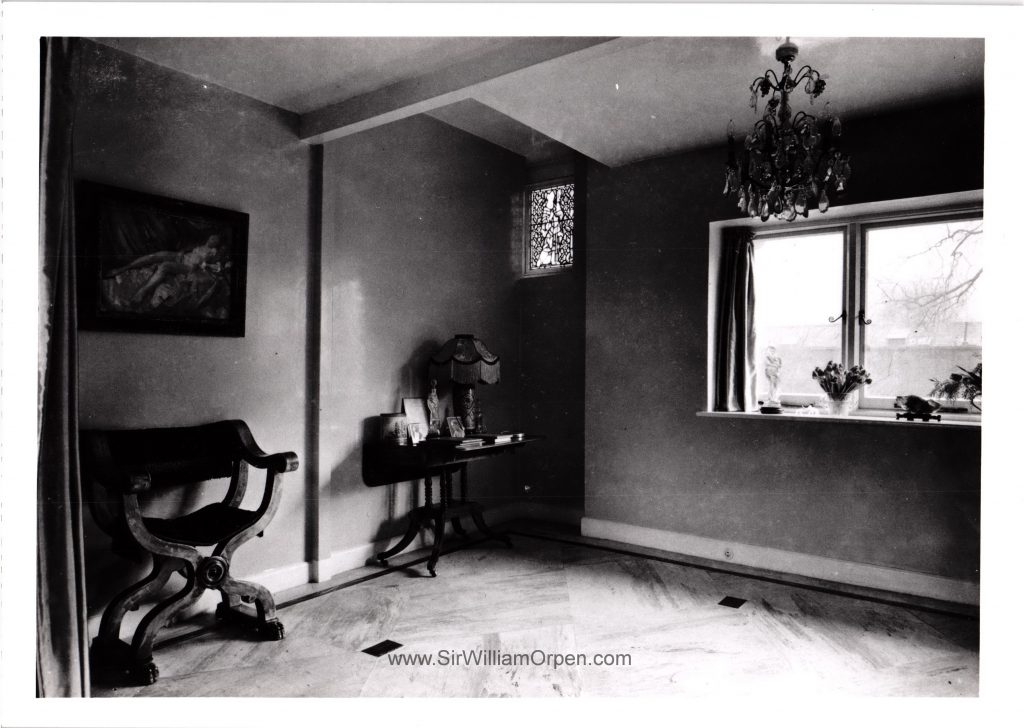 Image (5) This is an unfinished portrait of William Orpen by Francis Edwin Hodge (1883-1949) Private Collection. Hodge studied under Orpen and painted this from a photograph of Orpen working on “The Black Cap” in 1928. 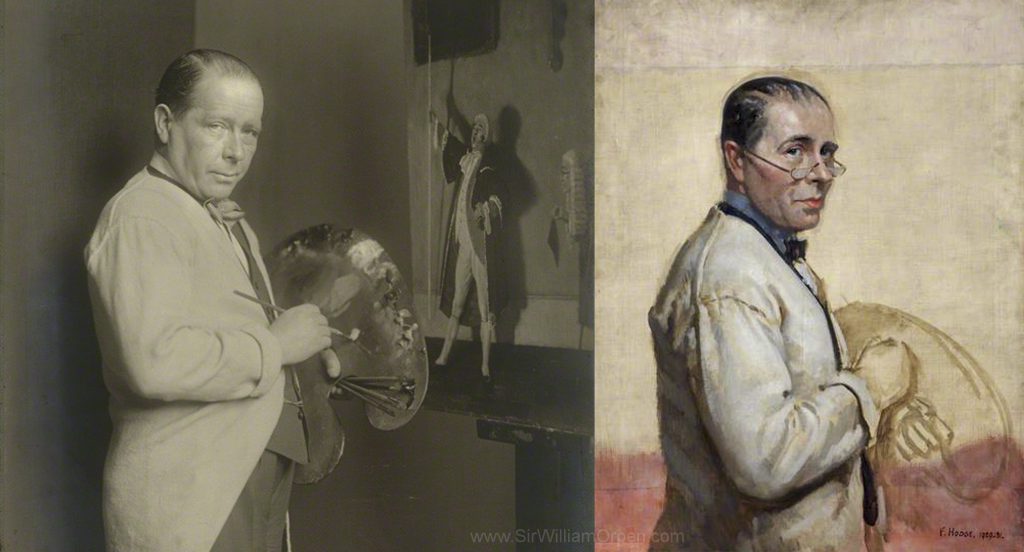 The Chelsea house, named Oriel, after Orpen’s home in Stillorgan, Dublin is currently owned by husband and wife – Ken Howard R.A., O.B.E. (painter) and Dora (photographer). It’s fitting that the former home of such a great artist should still be in artists’ hands.