Rebecca Dulcibella Orpen (watercolourist and portrait painter) born in Cork about 1830 – died in Warwick in 1923.

She was the daughter of Abraham Edward Orpen and Martha Chatterton and a second cousin once removed of Stillorgan born artist Sir William Orpen (1878 – 1931).

Here is a snippet of her life and a some of her paintings from Baddesley Clinton, Warwickshire (see link below). 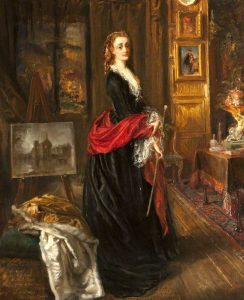 Edward Heneage Dering (1826 – 1892), sent a marriage proposal to Rebecca Orpen but the request was read by her guardian (also an Author) Lady Georginia Chatterton* (1806 – 1876). Lady Chatterton mistook the proposal to have been addressed to her and duly accepted. Edward Dering decided that one in the bag was better than two in the bush and married Lady Chatterton. 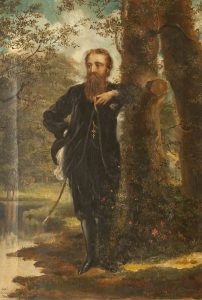 Edward Heneage Dering (1826 – 1892) in the Grounds of Baddesley Clinton by Rebecca Orpen. 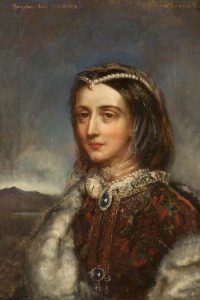 Rebecca Orpen later married Edward Ferrers of Baddesley Clinton Hall. Both couples lived together as they had a lot in common, like philosophy and wearing old fashioned clothes. The ‘Quatre dans un lit’ was condemned by the local Rector and was the scandal of the town.  When Lady Chatterton died in 1876 and Edward Ferrers died in 1884 – Edward Dering and Rebecca Orpen finally got married. He died in 1892 and Rebecca died in 1923. 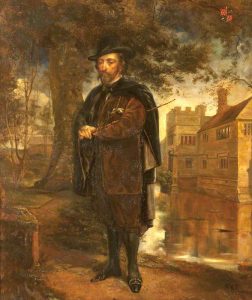 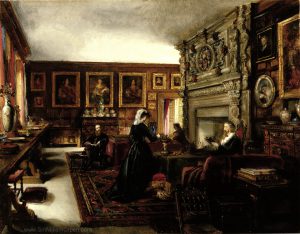 Quartet in the Great Hall, Baddesley Clinton by Rebecca Orpen.