‘The Mirror, and ‘Soldiers at Cany’ by William Orpen. Review of an Exhibition at The New English Art Club in the Pall Mall Gazette – 15th November 1900 by Alice Meynell. 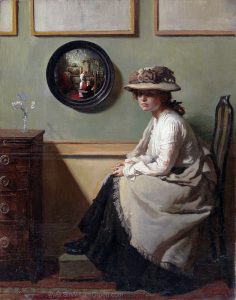 Mr. William Orpen shows much more than promise in “The Mirror” a beautiful piece of painting, keen, yet broad, and curious in quality, like and yet unlike a Millais of the “Blind Girl” . 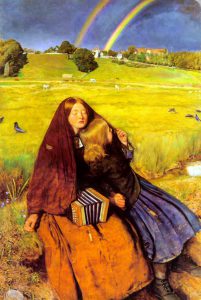 Mr. Orpen, who had a most solid kind of drawing, paints with a grand delicacy such passages as the tender light reflected upwards on the hat shadowed eyelids of a little face—or rather, the space between eyebrow and eyelid. The model sits in intense white light and wears a white bodice, and this shadow beneath her hat-brim is full of colour, and thus exquisitely pencilled with reflections. There is a little curve of light that sometimes comes around the iris—something quite different from the usual sparkle, and more Interior; this Mr. Orpen has seen and has rendered with infinite softness in a most living eye of this tiny face. The wall is plain, and in the midst a circular mirror reflects’ with an increase of crystalline affect the bright things in the room, beautifully painted; but the girl’s face is the triumph. It is not easy to see the same hand in the black shadows of the ‘Portrait of Herbert Everett’. 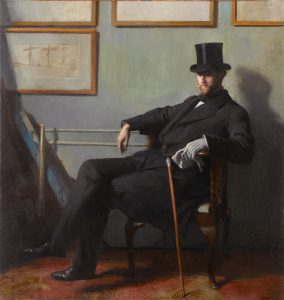 The landscape of the “Cany,” also by Mr. Orpen, is strongly and simply painted and lighted by a sun that leaves the trees deep in colour; the painting of the little village and the wood has that beautiful keen execution so perfect in the “Mirror.” It is best not to profess to understand the figures—four French soldiers of strange construction marching with stranger action. We need not think that a fine artist would take means so cheap to cause astonishment as an end to be gained; but we can hardly allow the puzzling of the public to be worth doing even as a kind of incident. 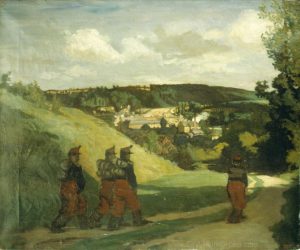