The Self portrait and the Grace portrait are very likely to be studies for a double portrait of the couple Orpen did in 1901, the year of his wedding. Bruce Arnold makes reference to the oil and a study in his book – ‘Mirror to an Age’. 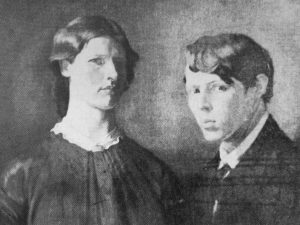 “He painted a large canvas of himself and Grace, side by side. A study for this double portrait was included subsequently in the Carfax exhibition as No.7, ‘Two Portraits’ priced at £6, while the painting was sent in to the Society of Portrait Painters, Orpen’s first work to be exhibited with that group. It is remarkable. Orpen, even then, was a creator of fact, not of myth. It cannot be described as a happy honeymoon painting. But it is a truthful examination of himself and his wife, raw and uncompromising. The artist’s own expression is serious and intense. There is no attempt at self-caricature. Grace is painted in a stiff and slightly gauche pose, taller than he — as she was — leaning back, and with a hint of suspicion or doubt in her eyes. Her auburn hair is plainly done in a hank at the nape of her neck, and there is a reddish flush to her cheek, not altogether attractive and hinting at her rather poor health. Nevertheless, the painting’s simplicity and directness of statement are compelling, as is the richness of tone, and the firm handling of light.”

It is not clear whether the “Two Portraits” No.7 Carfax Gallery refers to two separate drawings (in which case these two could be the same) or a double portrait on a single sheet (as per the oil).

The three Portraits in the Christie’s sale. 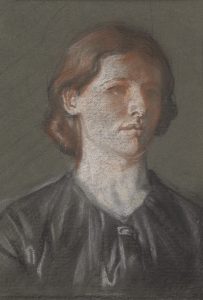 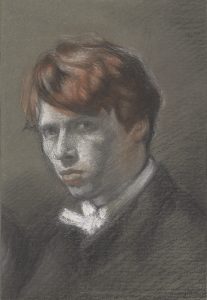 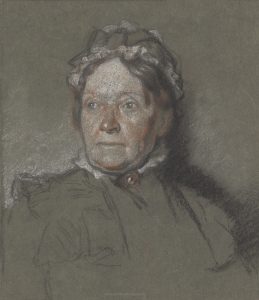 It is also probable that the painting of Orpen’s Mother, Annie, dating to about the same time, 1901. 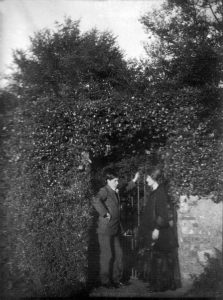 Photograph of William and Grace Orpen at the gate of ‘Oriel’ Stillorgan, County Dublin, again from around the same period – 1901, which may also have inspired the double portrait.

The 9th April Auction Results will be added to this post as soon as they are published.

I do hope these beautiful portraits of Orpen’s wife Grace (Nee Knewstub), his mother Annie (Nee Caulfeild) and a self portrait stay together as a set.

We use cookies to ensure that we give you the best experience on our website. If you continue to use this site we will assume that you are happy with it.Ok