Born 31 August 1879, the eldest son of Francis Formby Back of Harrow Weald, proprietor of The Egyptian Gazette. He won classical scholarships at Marlborough College and Trinity Hall, Cambridge, where he graduated in 1901 with second-class honours in natural science. He distinguished himself in rowing and boxing. He took his clinical training at St George’s Hospital, where he won an entrance scholarship, qualified in 1905, won the Allingham scholarship at St George’s in 1906, and took the Fellowship in 1907. He was house surgeon, house physician and obstetric assistant at St George’s, and was elected assistant surgeon in 1910 when Lawrence Jones, F.R.C.S. retired through bad health. Back carried on the sound methods of his immediate predecessors, Marmaduke Sheild, F.R.C.S. and Crisp English, F.R.C.S. He won an Albert Kahn travelling fellowship in 1911 and wrote the required record of his voyage around the world, which was privately printed in 1913. During the war of 1914-18, he served in the R.A.M.C., with the rank of captain, at the 4th London General Hospital, the 54th General Hospital in France, and as a surgical specialist at Catterick Camp, Yorkshire.

He was elected surgeon to St George’s in 1918, and became consulting surgeon on his retirement in 1938, but returned to active work 1943-45 during the second war. He was appointed governor of the hospital in 1951. Back was an assistant surgeon at the Royal Waterloo Hospital for Women and Children, and surgeon (proctologist) at the Grosvenor Hospital for Women, where he developed and practised the abdominoperineal technique for cancer of the rectum introduced by W. Ernest Miles, F.R.C.S. He was also examined in surgery for Cambridge University. He was active in the affairs of the Medical Defence Union, serving on the council from 1944 and as president in 1949.

Ivor Back married Barbara, daughter of F. H. O. Nash of Battle, Goring, Oxfordshire, who survived him with one son, a barrister. He died on 13 June 1951, aged 71. He was a man of tall commanding presence and striking personality, and was proudly conscious of his descent, through his grandmother, from the great Duke of Wellington. He was a connoisseur of art and literature and was deeply interested in criminology. As an expert medical witness in the courts, he was absolutely imperturbable. He had considerable success as an occasional journalist, and he took high rank in Grand Lodge Freemasonry and was a past master of the Lansborough Lodge. His recreations were golf and fly fishing. He was an excellent after-dinner speaker. His portrait in an operating dress by Sir William Orpen is at the Savile Club, of which Back had been chairman.

He had a large private practice in Queen Anne Street and later at 4 Park Square West, and lived at 8 Connaught Place, London W2.

Seated to just below the knee, body facing bottom left, head turned towards the viewer. Wearing a white full surgical gown, and brown rubber gloves resting on his parted knees. Dangling from his right hand is a white surgical cap. Light curtain backdrop.

Provenance: Artist’s Studio Book: Sold for £100 but a notation in brackets “(offered 2500 guineas)”;

Back, Ivor (The Sitter);

Beaverbrook Art Gallery, Canada (On Loan from Mrs Ivor Back from the Gallery Opening in 1959 to 12 April 1983); 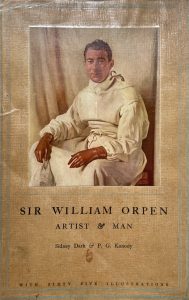 Royal College of Surgeons, Lives of the Fellows, pages 30-31.

Condition: There were scratches to the lower right quadrant of the canvas, mainly to the varnish [by May 2002]. Restored and re-varnished April 2006.

Royal Academy Illustrated gives the measurements as 44″x40″. The difference may be the frame.

FROM: LIVES OF THE FELLOWS: ROYAL COLLEGE OF SURGEONS OF ENGLAND pages 30-31.

Round the world and back. Privately printed, 1913.