See previous blog post on the Sir Michael Smurfit Art sale by Sotheby’s London 9th Sept. 2020 which includes one of the paintings below – ‘Solitude // Night’ : – http://www.sirwilliamorpen.com/michael-smurfits-collection-auction-includes-four-works-by-william-orpen/

The Window / Night Series is a series of works, from about 1902 to about 1908, all featuring the same window in Orpen’s Chelsea home, 13 Royal Hospital Road, at night, and in the main are characterised by the deep cobalt blue of the night sky. All but one are oils (the other being a watercolour), and all but what is believed to be the first (which contains no figure), contains the figure of the Artist’s wife, Grace.

References to the works are often confusing, because not only was the subject matter similar, but also the titles. It therefore cannot be said with certainty exactly how many there were in the series. Five have been positively identified however, along with two sketch studies. Certainly some, if not all, of the other references could well refer to one or other of those already identified. 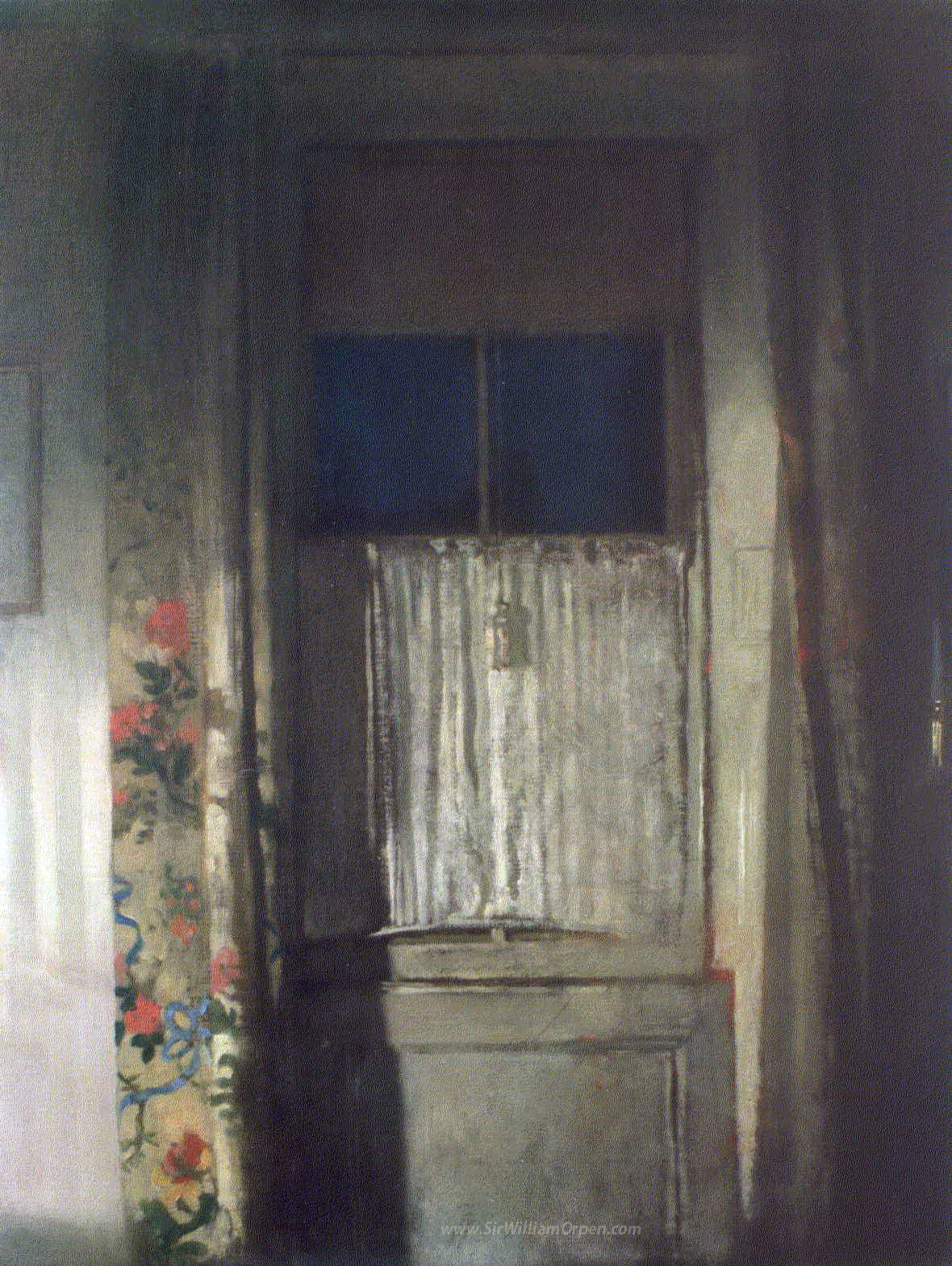 The Window of No.13 Royal Hospital Road, Chelsea. There are no human figures in this work. (circa 1902).

Provenance : Always in the Artist’s Family.

Cara Copland lists the work ‘Night (Small)’ as belonging to Lady Orpen. As this was the only ‘Night’ picture she owned, Konody and Dark, in using Cara Copland as their source, mis-dated the work. Cara Copland, herself does not date it. 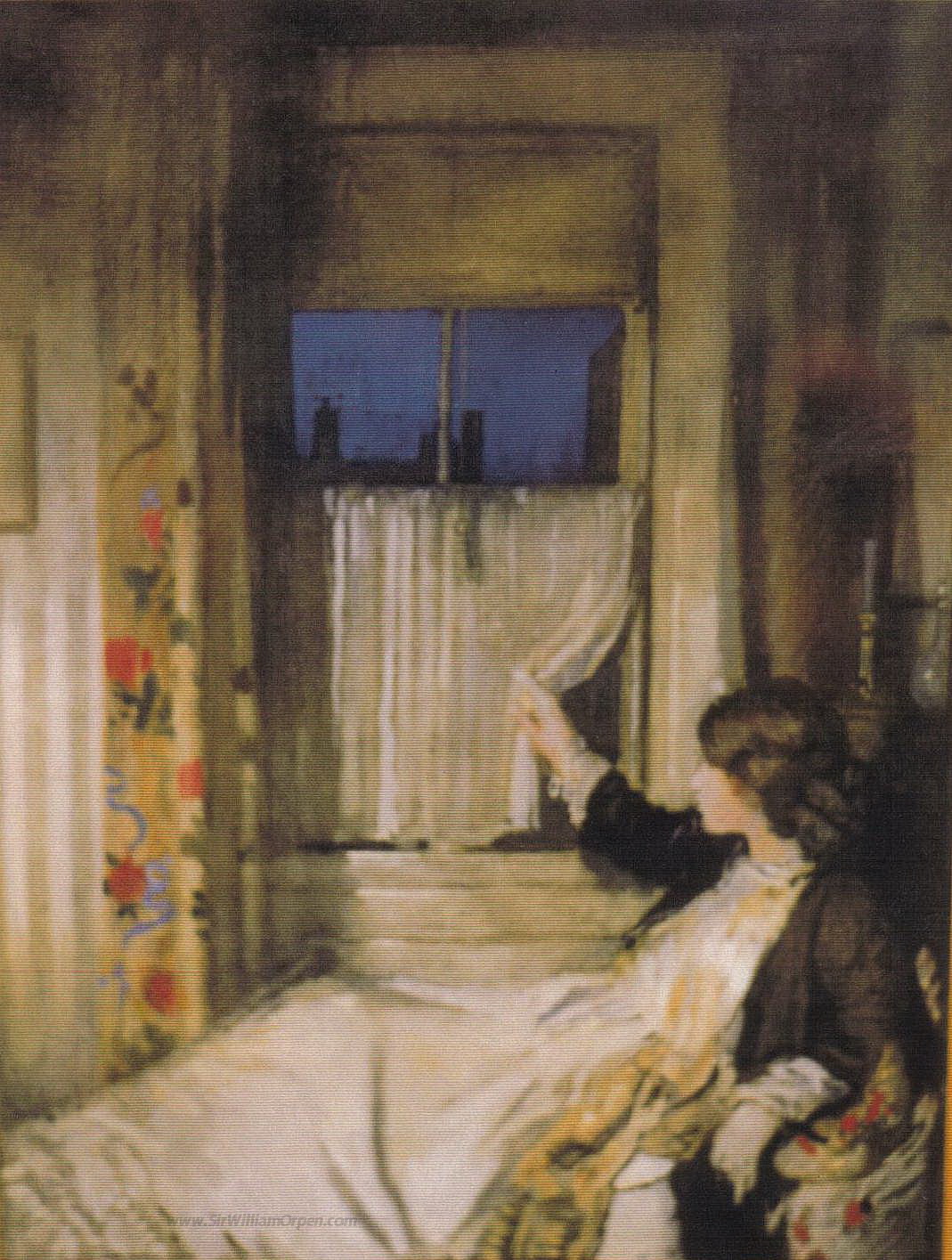 Woman seated, looking through netted window at night. She is holding the net in her right hand. 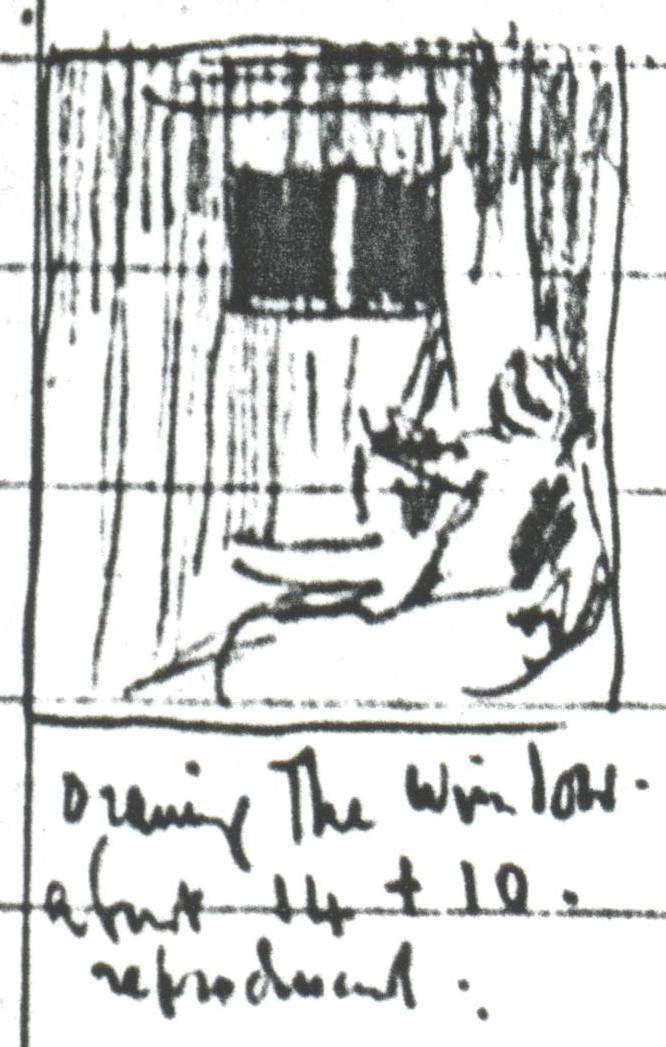 Given by Asa Lingard to Bradford Art Gallery in 1926.

“A nervous study of a figure at a window by Mr Orpen.”

Label on back of Frame from William Marchant & Co London.

Also known as Solitude // The Window.

Woman lying back in chair, eyes closed, hands clasped to head. She is in front of a window partly covered by net curtain, at night. 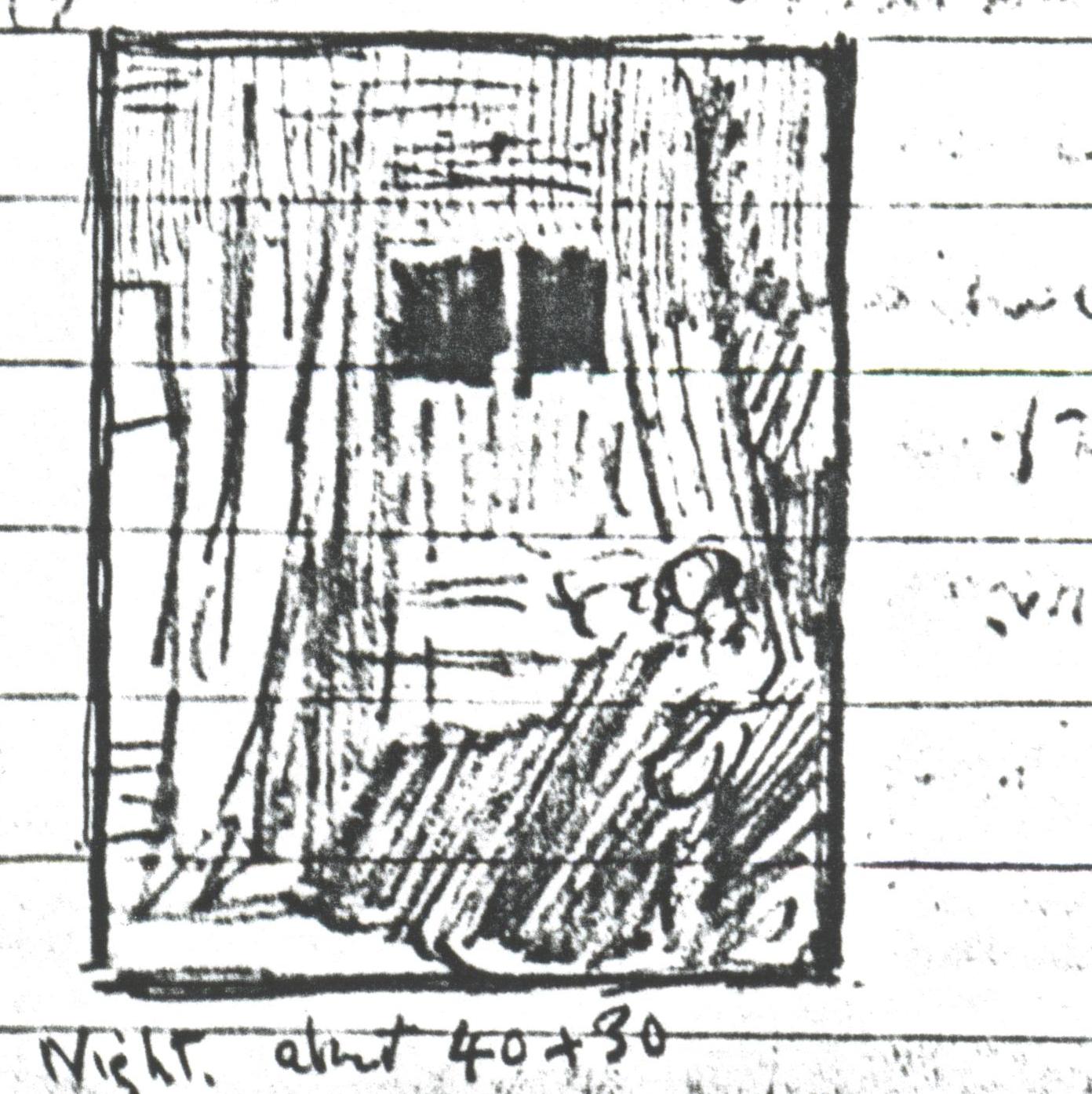 At first sight, the provenance as outlined by Phillip’s for their 1994 Sale catalogue does not appear to be consistent, with that traced through illustrations in contemporary journals. However they are not necessarily mutually exclusive. The Phillip’s provenance is as follows: –

Probably with the Goupil Gallery, 1912.

Cara Copland, in her listing, lends support to the Phillip’s provenance. “‘Night’ or ‘The Window Light’ (42  x31) Painted at 13 Royal Hospital Road, 1907 – sold to William Marchant – lately sent by Barbizon House to W.B. Simpson, 84 Vincent St. Glasgow – by order of Mr Howden Hume.” Barbizon House was a Gallery run by David Croal Thompson, but the 1912 reference may be for another picture in the series, as there was an entry in the Studio Book for that date.

Window Picture : The Night, // At the Window. 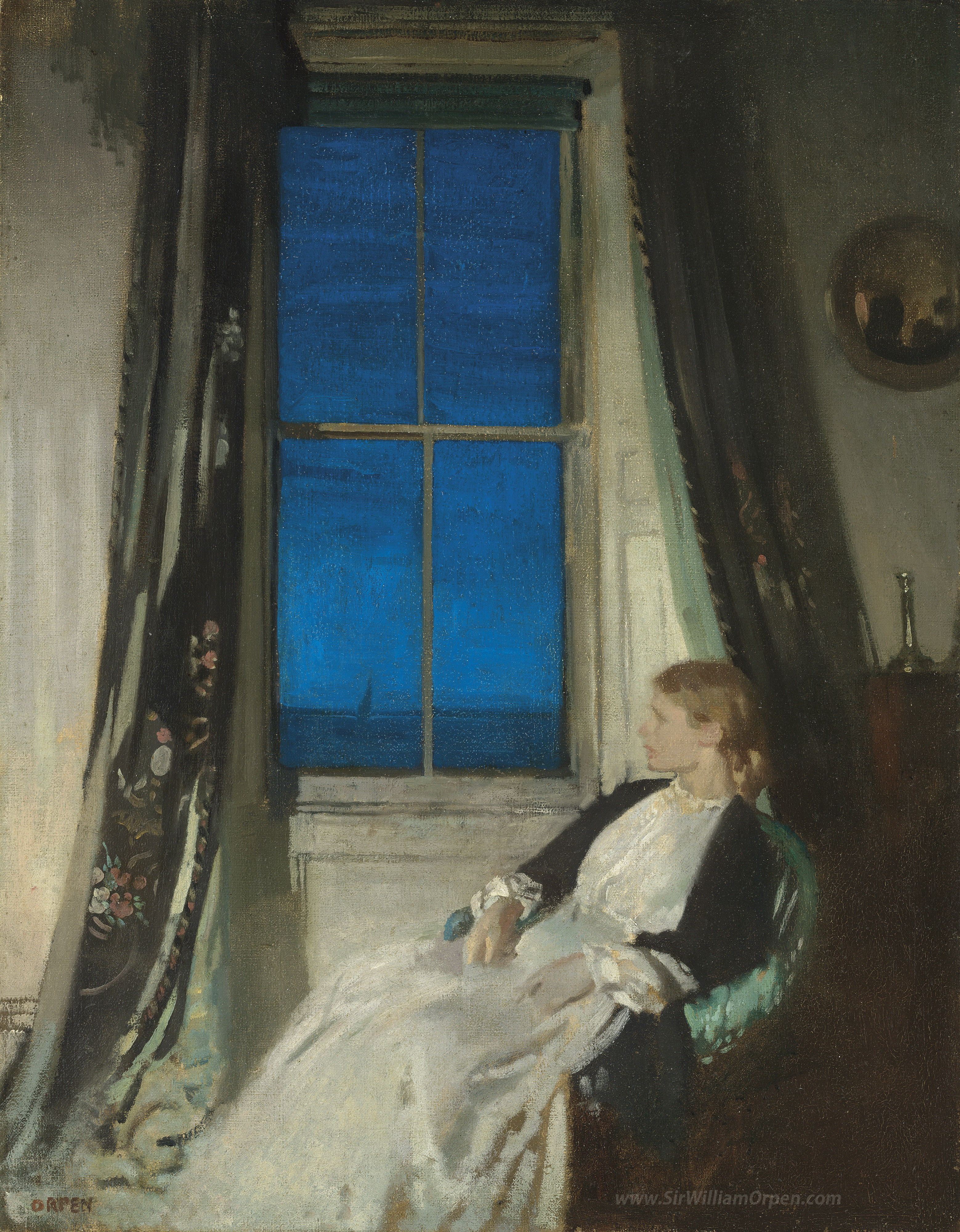 Woman seated in chair gazing out of the window at night. Her hands are resting on her lap.

Provenance: Possibly: Sold at the Goupil Gallery in 1907.

Unpublished letter from Bruce Arnold, dated 23 August 1977, to A. Dixon, of National Gallery of Victoria, Melbourne, in which he mentions a version hanging in Annabel’s Nightclub in Berkeley Square.

The National Gallery of Victoria, Melbourne, in the notes to their picture ‘Night (No.2)’, footnote 5, suggest that this work was sold at Chenil Gallery in 1907, as per the NGI Centenary catalogue entry. 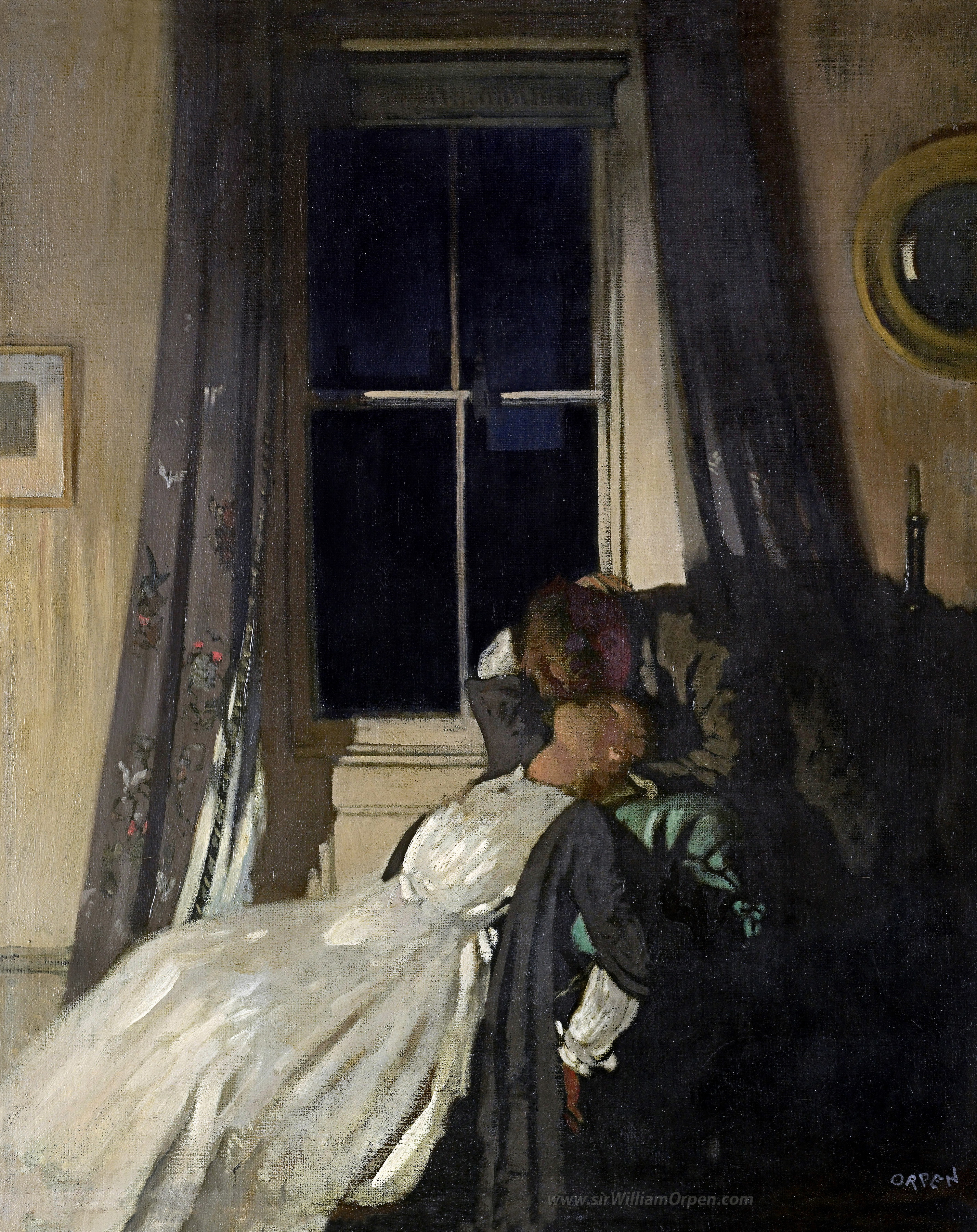 Man leaning over from back, kissing woman stretched back in chair, in front of window, at night.

According to a Reuter’s report, reproduced in a British Daily, ‘Night’ went down in the steamer ‘Manuka’, when it was ship-wrecked, 16 December 1929, off the coast of New Zealand, whilst on its way to Dunedin. However these reports of its demise were premature, for although it was originally part of the E. Murray Fuller Exhibition in New Zealand, it had been shown first in Melbourne, and sold there. Consequently it may not have been on board, although another Orpen Picture ‘Resting on the Somme, 1918’ was lost.  However one key feature differs this work from others in the series, and that is the lack of the strong blue of the night sky. This work has an overall greyness. Could it be possible then, that although the work was sold in Melbourne, it continued on tour, was involved in the ship-wreck, was subsequently recovered, but was damaged by the salt water, and returned to Melbourne, rather than being sent on the replacement exhibition?

REFERENCES NOT MATCHED TO IDENTIFIED WORK: –

Title Not Matched to Known Work Exhibited : Goupil Gallery, Summer 1909, Paintings of the Barbizon, Modern Dutch and English Schools”, No.34, as “The Window”.

There is no split between oils and drawings in the catalogue but assumed oil as two of the works marked pastel.

Title Not Matched to Known Work.

It is not certain if this picture belongs to ‘The Window’ series. Certainly the window picture known as ‘Solitude’ was known by that title by the time of the 1925 sale, but the Provenance given to it for the Phillip’s sale 7 June 1994, Lot 68, suggest that this work is different.

Woman seated, looking through netted window at night. She is holding the net in her right hand.

This is the same version as the Bradford Watercolour (0007), and maybe same work but incorrect caption detail. 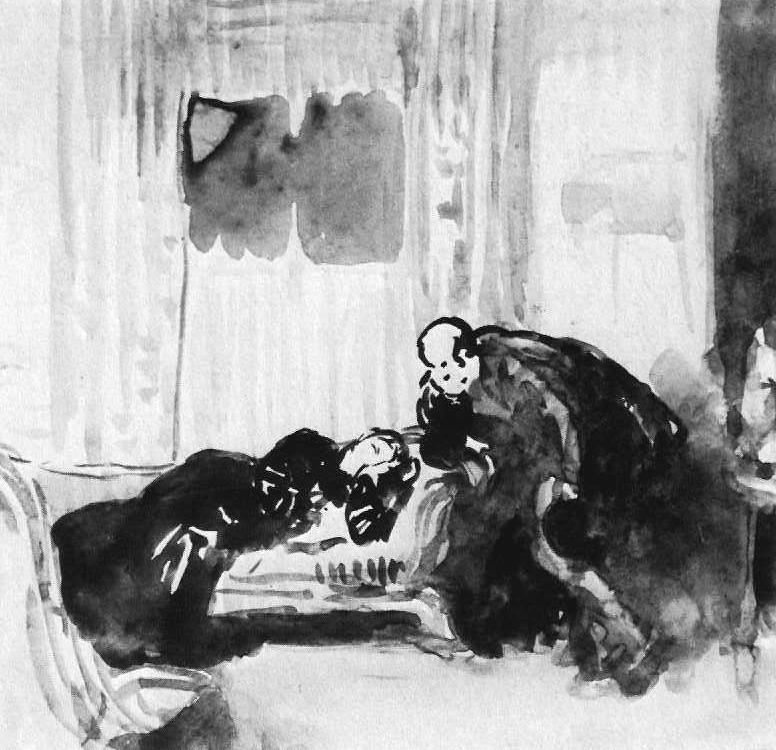 Drawing of a woman lying on a couch in front of a window, with a man leaning over her near her head, 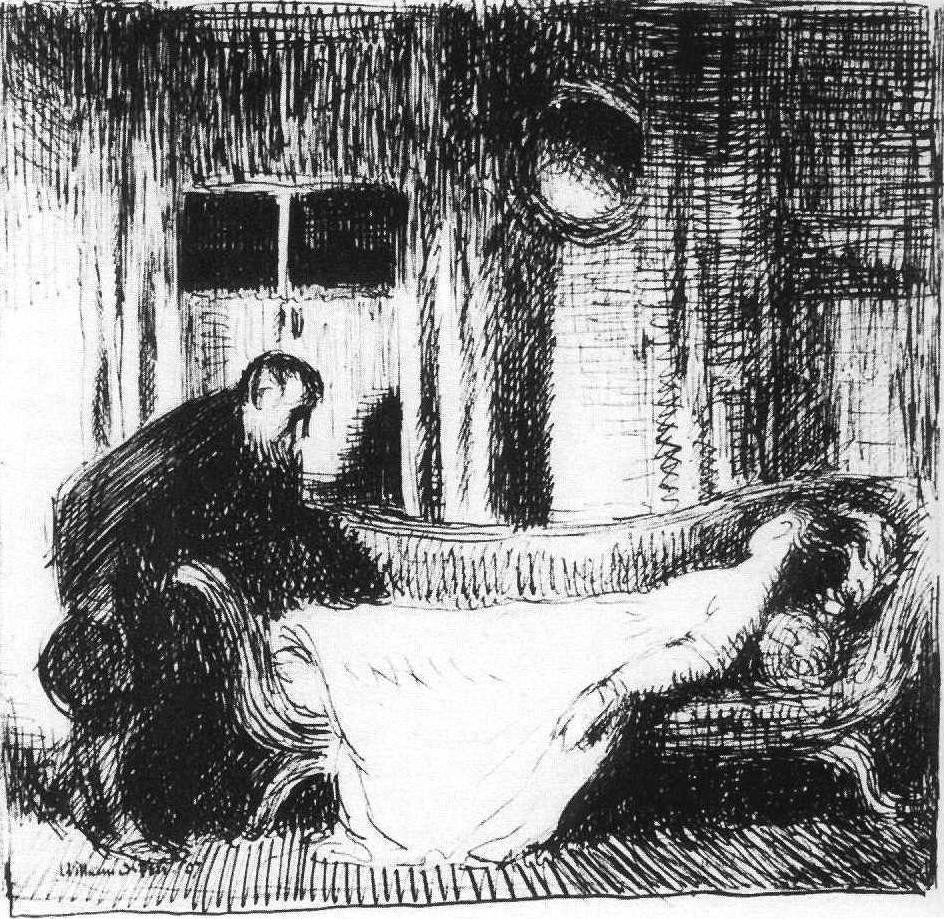 Drawing of a woman lying on a couch in front of a window, with a man leaning over her near her feet.

REFERENCES NOT MATCHED TO IDENTIFIED STUDY.

These two illustrated letters, the illustrations of which relate to the Window-Night series, and most specifically to Night No.2 (National Gallery of Victoria, Melbourne, Australia)  were sent to Grace, the artist’s wife, in 1906, when Orpen was up in Huddersfield painting the portrait of Miss Annie Isobel ‘Lillo’ Lumb (1899-1974) (1906). 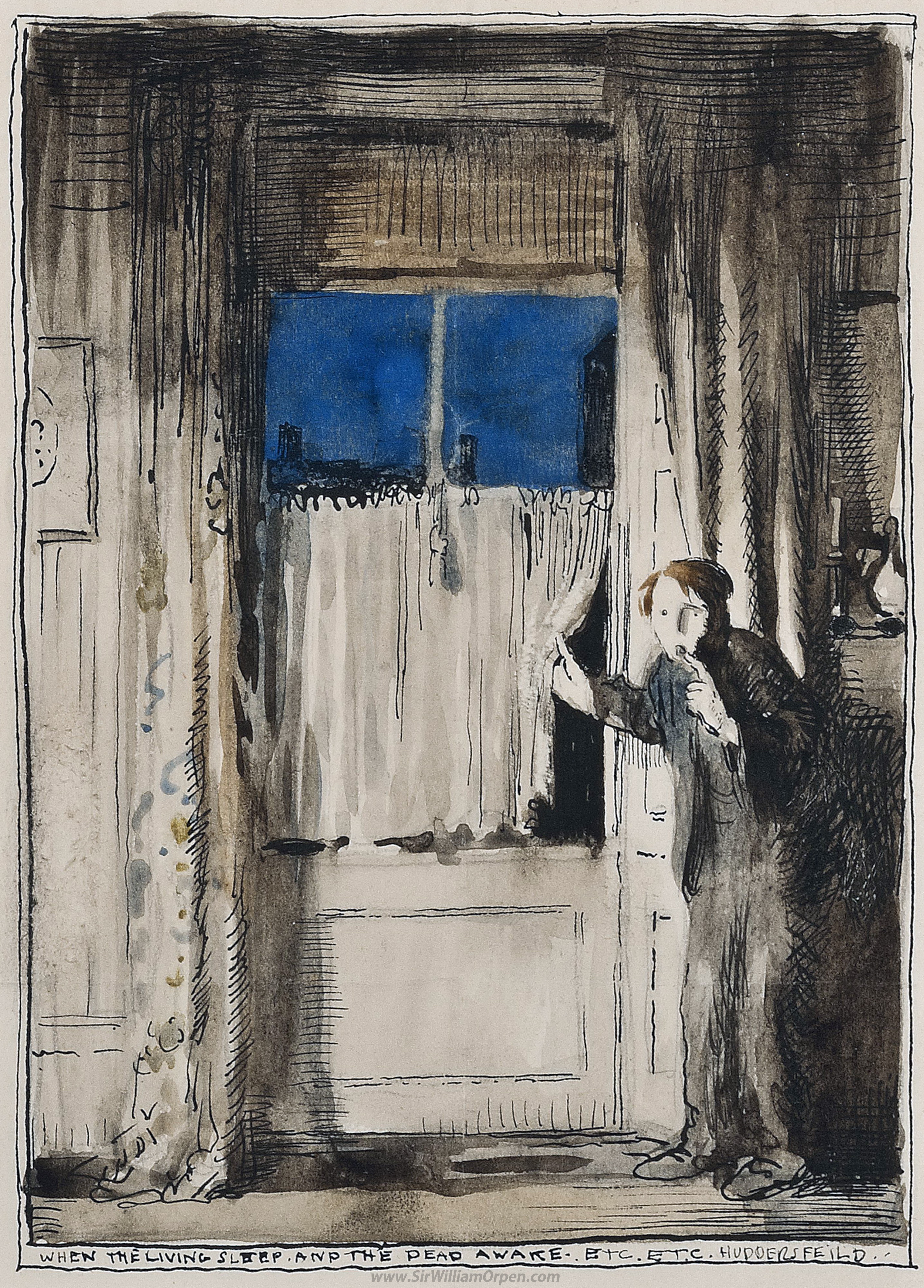 “When the Living Sleep and The Dead Awake. etc. etc. Huddersfield.”

“My dearest wife – thank you for your letter received this morning – I am sorry I missed the post yesterday – up in this part (I am staying at Holmleigh) one must post before 8.30 if it is to get to London the same night – forgive me doing nearly the same drawing – my mind is running on this picture – I am sorry you thought my last man was a woman – this one is also supposed to be a man!”
Illustrated Letter. Private Collection.