An obscure article in a provincial English newspaper has enabled the identity of this sergeant in the Grenadier Guards to be identified as Sergeant Stanley Burton (1883-1962). 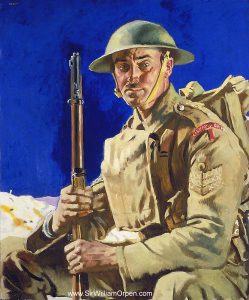 At Southport there is a policeman who has had the unusual experience of sitting for a famous artist – he once posed for the late Sir William Orpen.

He is Sergeant Stanley Burton, who retired some time ago, but has now been recalled to the Police War Reserve. During the last war he sat as a Grenadier Guardsman in service kit complete with tin hat and respirator for Sir William.

Well over six feet, he was a sergeant in the Grenadiers and was selected for the original of the painting in 1918, when he returned from France.

It was to have been used for poster purposes. When the war ended the portrait was exhibited in galleries in England and U S A. before going to the British War Museum.

After the war Sergeant Burton joined the Southport Police Force and became their drill instructor. Now he is on the job once more.

Further research shows that Stanley Burton was born in late 1883 (according to his service records) in Hulme, Manchester, England. He joined the Grenadier Guards in 1902 as a private, where he remained, either actively or in the reserves, until he was demobilised in 1919, having obtained the rank of sergeant in 1917. For most of his military service he was stationed in the United Kingdom, but served in France with the Expeditionary Force between 2nd March 1917 and 14th May 1918, during which time he was awarded the Military Medal on 31st July 1917. His return to England, in May 1918, coincided with the time Orpen was back in London from the Western Front, i.e. between March and July 1918. Service records show that Stanley was 6 feet 2¼ inches, fresh complexion, brown eyes, and dark brown hair, had “P” tattooed on left forearm and Dot tattooed on his right forearm. He also had a scar in the centre of his forehead and had slightly flat feet. Prior to signing up in 1902, he was a ship’s steward.

On 13th February 1909 he married Ellen Donnelly (Abt. 1883-1956), at St John the Evangelist Roman Catholic Church, Lathom, Near Ormskirk, Lancashire, and they had five children, two sons and three daughters.

A half-length portrait of a British soldier set against a deep blue sky. He sits in full kit, his arms resting on his thighs, his rifle gripped firmly in his hands.

The painting was displayed at the Watts Gallery exhibition – William Orpen Method & Mastery – from 19th Nov to 23rd Feb 2020.