Part of the Michael Smurfit Collection for sale ‘Myself and Cupid’ by Sir William Orpen (1910).

UPDATE – Sold for £321,300 GBP. Purchased by The National Gallery Ireland.

“Like Rembrandt he found his own features and the effect left upon them by the passing of the years a source of inexhaustible interest. No artist, save Rembrandt, has left so complete a pictorial autobiography.” Paul Konody and Sydney Dark, ‘William Orpen Artist and Man’, Seeley Service & Co., London, 1932, page 175.

For William Orpen, self-scrutiny was instinctive. He did not admire his face and form, so much as use them as primary sources for expressive gesture and emotion. His scowl, his stance, his sloping gait were so deeply inscribed in visual memory that when not featuring in painted portraits, they appear in the margins of his voluminous correspondence. It was about ‘identity’ in the sense of playing a part, about Irishness, authorship, friends, influences and daily life all laced with a wry sense of humour. Indeed, when Myself and Cupid appeared at the New English Art Club in 1911, humour, ‘prepared and deliberate’, was exactly what Daily Telegraph observed – as much to do with the juxtaposition of artist, spotted stuffs, painting gear and sculpture cast as it was to do with facial expression. Each of these observed ingredients was, in reflection, a powerful signifier, yet he was only innocently looking, as his frame-within-the-frame reminds us, in a mirror.

Orpen was fascinated by reflections and had used mirrors many times before. It had, for instance, been the subject of one of his first important and much referenced pictures ten years earlier – The Mirror, 1900, Tate.

and since then, aside from ‘heroic’ self-portraits such as The Dead Ptarmigan 1909,

it had often been frequently deployed as a compositional device. (See for instance, the still-life The Reflection, 1904, (Private Collection),

the figure-piece also known as The Reflection, 1906 (National Gallery of Canada, Ottawa.

In 1909 however, the painter began a major series of six self-portraits, five of which feature large mantelpiece mirrors. These began with two versions of Myself and Venus c.1909-10 (one in Carnegie Museum of Art, Pittsburgh.

Myself and Venus (No. 1) by William Orpen.

Myself and Venus (No. 2) by William Orpen.

and the other in Hugh Lane Gallery, Dublin), that were worked alongside the present picture. They were accompanied by Leading the Life in the West c.1909-10 (Metropolitan Museum of Art, New York).

Leading the Life in the West by William Orpen.

and Self-Portrait (Cleveland Museum of Art, Ohio) in c.1910-12, along with the closely related, second version of Myself and Cupid (Museum of Fine Arts, Boston), the only painting in the series which does not include a mirror frame but does juxtapose ‘Cupid’ with the artist and a nude model. (The works entitled Myself and Cupid are as Self-Portraits nos. 22 and 23 in the Cara Copland list (1932)). All of these works, with the exception of the present canvas, are in major museums.

Coming at the start of the series, Myself and Cupid sits beside the early versions of Myself and Venus. Motifs and titles – the self, placed beside casts of ‘Venus’ and ‘Cupid’ – suggest the artist as seeker after ideal female beauty and at the same time stricken in love. ‘Cupid’, although normally shown as a little archer, in this case is represented by the putto, ‘Boy with a Dolphin’ by Andrea del Verrocchio. (The original putto was executed in 1465 for a fountain at Villa Medici and was brought to Florence by Cosimo de Medici in the mid-sixteenth century. It now resides in the Palazzo Vecchio.) Both sculptures were popular in art school cast rooms and are likely to have been chosen because they were easily recognizable. In the juxtaposition of artist and sculpture we enter the realm of allegory – ‘prepared and deliberate’, according to the Telegraph reviewer. And if the press was divided – The Times called it ‘a whimsical combination of himself and a statue’ while for the critic of Truth, an ‘unpromising subject’ had been transformed ‘into a harmonious and satisfying whole’ – there was the sense throughout of something ‘ingeniously novel’ (Western Daily Press) and ‘outstanding’ (The Scotsman). The putto also divided opinion: it was ‘overpowering’ (The Queen), ‘distracting’ (The Daily Telegraph), while in placing himself ‘before his votary’, the artist appeared to be performing an act of homage.

For Orpen, the Renaissance sculptor had created something perfect, yet faintly ridiculous at the same time. It would flutter into other compositions – notably into The Poet, 1921 (Private Collection) and as a symbol of angelic afterlife in the early version of To the Unknown British Soldier in France 1922 (Imperial War Museum – its frivolity was later considered unsuitable to the solemnity of the subject). It also appears prominently in the studio portrait by the photographer, Malcolm Arbuthnot. 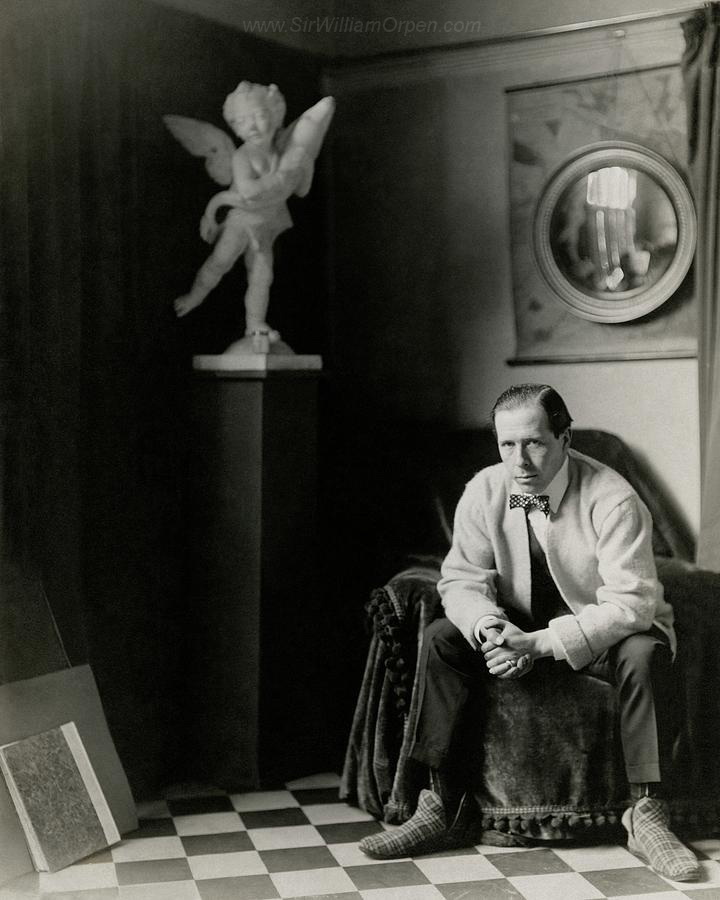 Photo of William Orpen in his studio by Malcolm Arbuthnot.

Reading the painting, however, one is obliged to address the ensemble – for today’s accoutrements may be swept aside tomorrow as the painter reworks his ideas. We are taken into the reflected space by a carefully repeated litter of cloths, brushes, tubes, bottles, a flask and a saucer. Reality thus moves swiftly into reflection over a seemingly disorderly pile of painter’s materials – impedimenta that appear in all five of the ‘Mirror’ self-portraits. Behind us, in the shadows stands the painter, placing a daisy chain, a child’s garland, around the base of the cast, its pedestal draped in spotted fabric that echoes that of his black-and-white cravat. He is dressed in black. Although he would take on numerous costumes, for these first of the series, the painter resorted to the garb of Baudelaire and Manet – and adopted with alacrity by friends such as William Nicholson. (In Orpen’s magisterial A Bloomsbury Family, 1908, (National Galleries of Scotland, Edinburgh) Nicholson wears his favourite spotted silk dressing-gown, while also often being photographed in a black velveteen jacket and white cotton ducks). Before he became a steeplechaser, or ‘man of the west’, Orpen was a ‘man in black’, addressing his audience from under impressive headgear, as in Myself and Venus and Portrait of the Artist, the two smaller pictures being worked at the same time as Myself and Cupid (figs. 3 and 4).

It may be at this early stage in the winter of 1909-10 that Orpen considered scaling up this concept with the present work. An undated letter (fig. 5) which must refer to Myself and Venus, when Orpen indicates that ‘they are taking away the picture to Pittsburgh’, also contains a watercolour sketch of the present work, and since the Carnegie International Exhibition, at which he won a First-Class Medal, opened in April 1910, we may assume that it must have been written around February in that year. The eagle-eye will, however, spot two significant differences between the tiny ‘letter’ version of Myself and Cupid and the final one. In the watercolour the painter is bare-headed and holds a palette. The tiny garland of meadow flowers encircling Orpen’s ‘Cupid’ may well contain a hidden message that only Mrs St George, Orpen’s future lover, might eventually grasp. Possibly because of his instant success in Pittsburgh, the later variant of the ‘Cupid’ self-portrait (fig. 6) contained the large leaded studio windows we see in the Pittsburgh version of Myself and Venus. While the two ‘Cupid’ canvases are identical in size, in the later variant the artist has stepped out of the mirror and stands before us in a shallow space, his black jacket exchanged for one in cream. The pictures are, nonetheless, similar in that the action occurs parallel to the picture plane and the windows form a picture-within-the-picture as the mirror had formerly done.

In later years, the critic, Frank Rutter, compared Orpen’s penchant for self-portraiture to that of Rembrandt, observing that in the majority of his portraits the Dutch master was also playing a part – ‘painting himself in any sort of get-up’. (Frank Rutter, Some Contemporary Artists, 1922, (Leonard Parsons, London), page 100; see also Frank Rutter, ‘Orpen’s Self-Portraits’, The Studio, vol LXXX, 1932, pages 268-277).

The sheer variety of settings in which ‘myself’ performs encourages us to move beyond the simple record of appearances – accurate though that always is. The painter’s job, in terms of self-scrutiny, was to find within himself, that which could be given to others.