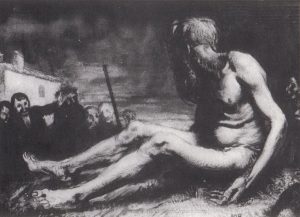 A Black & White copy of a watercolour of ‘Job’ by William Orpen (National Gallery Ireland). Not in the auction.

A Black & White copy of ‘Job’ Number 1 by William Orpen (Johannesburg Art Gallery). Not in the auction.

The following text is from Christie’s catalogue: –

During 1905, William Orpen produced a remarkable series of canvases. Abandoning the early interiors on which his reputation rested, he embarked upon paintings of vagabonds, saints and mystics looming out of the darkness. Critics and public were left guessing. The promising young painter now set for lucrative portrait commissions, was not playing safe.

In the previous autumn Orpen had visited Paris with the Irish picture dealer, Hugh Lane, calling at Durand-Ruel’s gallery in the rue Lafitte, where he introduced his companion to Edouard Manet’s work (Lane was immediately taken with the idea of buying Vieux Musicien (National Gallery of Art, Washington DC)). They considered an important early hispagnoliste painting, The Old Musician, 1862 (National Gallery of Art, Washington), but this was merely a prelude. After further lengthy train journeys, Orpen and Lane arrived in Madrid, and saw the Prado for the first time. Up to this point, Spanish seventeenth century Caravaggesque painting, beyond the examples in the National Gallery and the Louvre, was known only through photographs and reproductions. He rushed to make a small expressive transcription of the head of Velázquez’ Aesop, as Sargent had done, and was impressed by the pictures of hermit saints and peasant outcasts painted with brutal realism by the masters of the Sevillean School. Such scenes were churning in his brain as he returned to London and a foretaste of what was to come was given in the watercolour of Job (National Gallery of Ireland, Dublin), shown at the New English Art Club in the following spring.

This reveals that although two oil versions based on the Old Testament patriarch were current, the present example in which the naked penitent is mocked by a group of villagers, was certainly planned before April 1905. Seeing Manet, Velázquez, Ribera, Zurbarán and Goya in quick succession, Orpen, a middle class Protestant from the Pale, had been led back to Biblical allegory in ‘And corn shall grow in the desert’ (private collection), a transitional work, showing a motley gang of reprobates assembled around a corn-shoot miraculously springing from the barren earth.

‘And corn shall grow in the desert’ by William Orpen (private collection). Not in the auction.

These become the Goya-esque scoffers emerging from rustic Spanish pan-tiled buildings, one wielding a black baton, in the present oil. The message is at once clear and more enigmatic as the focus of attention shifts to the cowering naked patriarch who shrinks in fear, while a cockerel, added to the foreground, innocently pecks among the debris. While in the watercolour, Job looks towards his tormentors, in the present oil, he dramatically shrinks from them.

Orpen’s command of anatomy serves him well. The seventeenth century visual legacy embedded in the powerfully modeled human presence is profound. Precedents abound in Ribera’s St Andrew, 1632 and Jacob’s Dream, 1639 (both Prado Museum, Madrid) or Velázquez’ magisterial St Anthony the Abbot and St Paulus the Hermit, 1639 (Prado Museum, Madrid), all of which portray male hermit saints and patriarchs of extraordinary strength – as here. Orpen was not alone in responding to this powerful stimulus. Many second generation French Realists reacted with equal enthusiasm. Notable nineteenth century reworkings of the single, seated, semi-nude male which Orpen could also have known are Léon Bonnat’s Job (Musée d’Orsay, Paris) and Alphonse Legros’ Song of Jacob, (Musée des Beaux Arts, Dijon) and Pierre Puvis de Chavannes, The Prodigal Son, (National Gallery of Art, Washington DC, Chester Dale Collection). However, the closest French precedents – ones which Orpen may have known only in reproduction – were Jules Bastien-Lepage’s Job and Diogenes (Musée Marmottan, Paris). Both show the naked figure seated parallel to the picture plane in poses strikingly similar to that of Orpen’s Job.

The strong visual compulsion emanating from this formidable community of images proved irresistible, and at this moment Orpen was moved by the story of ‘the greatest of all the men of the east’, as the Bible author of The Book of Job describes him. One can imagine him thumbing its pages to discover a man deprived of all material wealth and afflicted with boils, enduring the taunts of three false friends who almost succeeded in persuading him to ‘curse God and die’ (for a short, lucid commentary on the Book of Job, see A. Brookner, Soundings, 1997 (The Harvill Press), pages 206-214). Job’s afflictions attracted a great deal of contemporary speculation. Late nineteenth century Biblical scholars were filled with uncertainty about the purpose and provenance of this account of the devious workings of a God who was neither merciful nor loving. For no reason other than the suspicion, planted by Satan, that ‘Job does not serve God for nought’, is he humbled. The Book of Job, as the Oxford historian, J.A. Froude pointed out in his essay, republished in 1897, had contemporary relevance; it questioned the popular Protestant belief in the morality of self-interest and in the equation of material splendour with the advance of the race. Job may have been beneficent, but he was, like self-made Victorian entrepreneurs, rich, and could afford it. Indeed, the book’s argument, for Froude, predicts the folly of personal wealth and all the elaborate supporting political and social structures that fall prey to ‘Irish famines … trade strikes, and chartisms, and Paris revolutions’ (J.A. Froude, ‘The Book of Job’, in Short Studies on Great Subjects, volume 1, 1897 (Longmans, Green and Co.), page 337).

Job’s plight could almost symbolise retribution for Albion’s exploitation of her oldest colony – Ireland. Implicit also was a critique of commercial imperialism, and the powerful rationale for the argument in Bernard Shaw’s Major Barbara. Men of Orpen’s father’s generation had been too preoccupied with the ‘bribe of heaven’. Stumbling among the Spanish flagellants, hermits, holy men and mystics, Orpen visualised a massive moral dilemma. The more impressive the poverty, the more presence the pauper commands, and the more insistent was the search for the message. Sargent, seeing what Orpen had done, swiped at this belatedly in his flashy ‘il Solitarrio’, (Metropolitan Museum of Art, New York) shown at the New English in 1909.

But this was too late and too sunny, and the innocent young deer, buried in nervous flicks of paint, too diverting. Orpen’s Job is of a different order of seriousness. Underpinned by the assumption that the realist/Caravaggesque tradition provided the means by which new national paradigms could be developed, Orpen saw that the stirring of new national consciousness, already under way in Spain with the ‘Generation of ’98’ painters, could start with these irreducible mendicants. Later, in that crucial year, he moved on to St Patrick (Potteries Museum and Art Gallery, Stoke-on-Trent).

‘St Patrick’ by William Orpen (1905). The Potteries Museum & Art Gallery. Not in the auction. 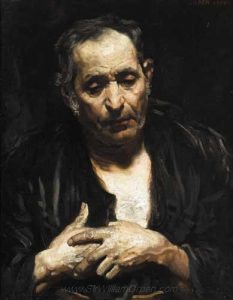 ‘The Saint of Poverty’, by William Orpen. Not in the auction.

The Saint of Poverty, (Glasgow Museums) and St John the Baptist (Mildura Arts Centre, Australia) in representing the stripped, scourged and purified human presence, taking on the greater sins of race and nation.

‘St John the Baptist’ by William Orpen (Mildura Arts Centre, Australia). Not in the auction.

While Orpen eventually became critical of catholic Ireland, and the richness of Hispanic culture faded, what he gained in Job and the series of saints and prophets that follow, was authority to engage the greater issues of the so-called ‘Irish Trilogy’. Nude Pattern: The Holy Well, 1916 (National Gallery of Ireland) awaits.

Christie’s express their gratitude to Professor Kenneth McConkey for preparing this catalogue entry.

Blog post by Dominic Lee who added the extra images which are not in the auction.