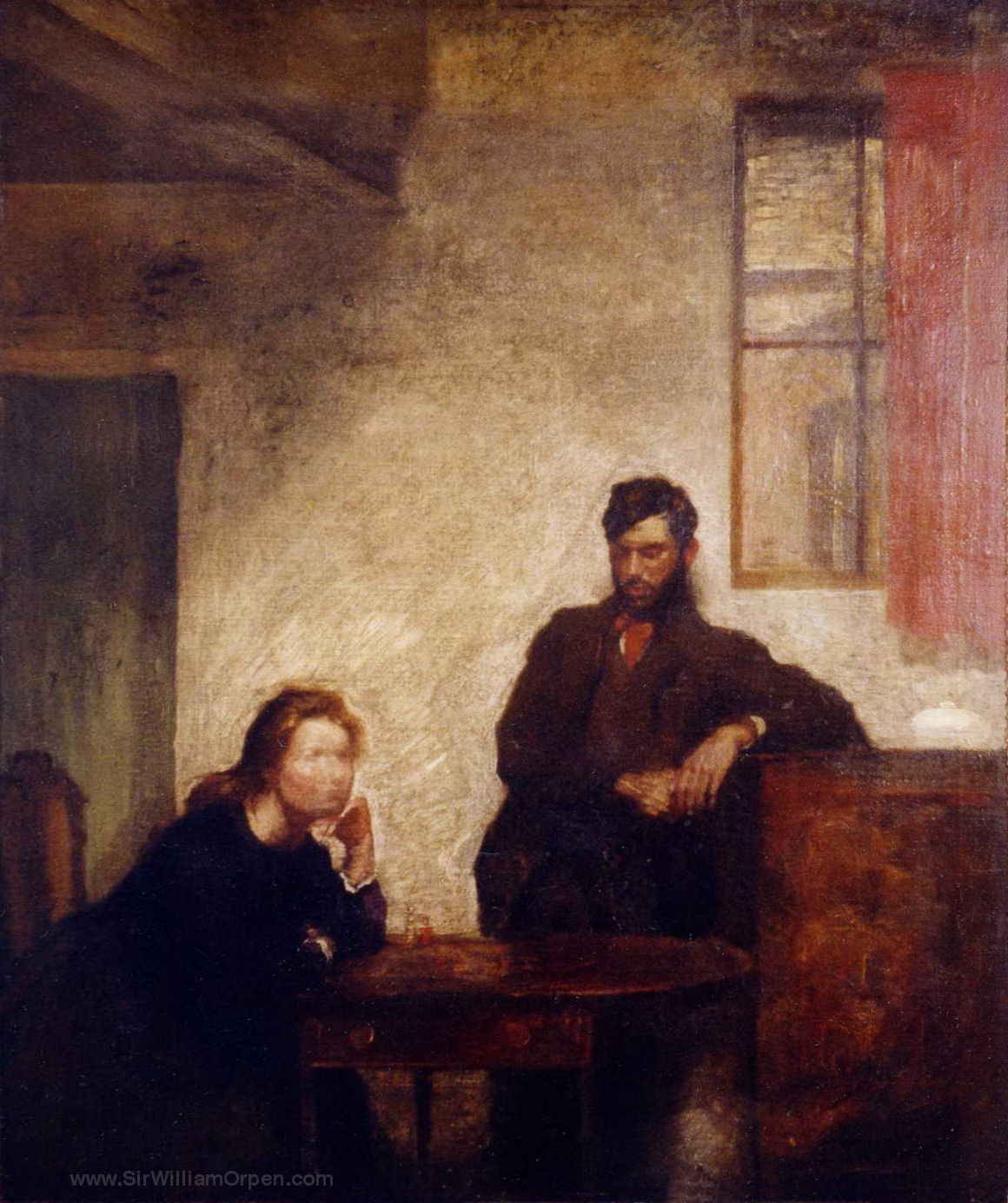 Provenance: Sale, Sotheby’s London, 12 March 1958, lot 171, was purchased by the father of the present owner and thence by descent.

None of the images below are in this sale.

Even though we know who they are, the couple posing in William Orpen’s Interior are not sitting for a double portrait. The man, his eyes downcast, leans on a cabinet, while the woman (Anita Bartle), seated beside him looks away. In the dingy room, the conversation has subsided. Their placing, and the momentary lapse that links them, suggests that complex events, those of a play, or a novel, have brought them to this point. The painter had, as we know from his success with The Play Scene from ‘Hamlet’, 1899 (Private Collection), an unerring sense of theatre.

The Play Scene from Hamlet by Sir William Orpen (1899).

The present picture is one from an exceptional series of interiors begun at 21 Fitzroy Street, London, in 1899-1901. The group includes, A Mere Fracture, The Valuers, The Chess-Players, The Refugees, A Window London Street, and the present work.

While in a number of instances these works followed the artist to his new rooms in Honiton Street, Chelsea following his marriage to Grace Knewstub in August 1901, Interior appears to have been abandoned around the time of the move. Before his wedding, the young artist remained in close contact with former Slade School friends who gathered at the gaunt eighteenth-century terrace, then known as The Newcomes, and so named because it was the former abode of Colonel Newcome and his artist son, Clive, the eponymous heroes of William Makepeace Thackeray’s novel (1855). (In Thackeray’s day the area around Fitzroy Square was known as ‘Anglo-India’ on account of its popularity with retired colonial service officers, of which the fictional Colonel Newcome was one.)

By 1899, when Orpen left the Slade School of Fine Art, the house was in the hands of Augusta Everett, the eccentric mother of John (Herbert) Everett, one of his Slade contemporaries (see Gwen Yarker, Inquisitive Eyes, Slade Painters in Edwardian Wessex, 2016, Sansom & Co, Bristol, pages 43-55.) Orpen occupied rooms in the cellar, installed a four-poster bed which features in The English Nude (Mildura Art Centre) and the portrait of Augustus John (National Portrait Gallery, London), and, when potential sitters appeared, sprinkled eau-de-Cologne to kill the smells that rose from the earthen floor. Here, under the rafters of the dreary edifice, he also worked on Interior.

The painting shows Emily Elizabeth Scoble, the artist’s model, and girlfriend prior to his marriage. Not only was she The English Nude, but she also posed for The Mirror (Tate, London), shown at the New English Art Club winter exhibition in 1900, and one of the artist’s most celebrated works.

Behind her stands Everard Meynell, also a Slade student and son of Alice Meynell, Oscar Wilde’s ‘Sybil of Style’, and one of the most respected late Victorian women poets.1 His father Wilfrid, an important editor and publisher, patronised Orpen around 1900 and wrote the early article on the painter. (Wilfrid Meynell, ‘William Orpen’, The Artist, vol XXXI, no 260, August 1901, pages 177-185. Wilfrid, for instance, purchased Orpen’s Portrait of Augustus John, 1900, which his daughter, Olivia, sold to the National Portrait Gallery in 1948 for £400). A prominent member of the little student coterie, Everard, Orpen and their student friends regularly convened at the Meynell’s house.2 As Everard’s sister Viola recalled:

‘The seats at the Sunday supper-table were now filled with the young. Augustus John and Orpen and Stabb and Wellington, fellow-students and friends of Everard at the Slade came to his home.’

Although Everard never pursued a vocation as an artist, his mother always retained the hope that he would return to painting, writing in 1917: ‘That would have been a career for him – a really great one’ (Viola Meynell, op. cit., page 311)

At this point, as a surviving letter reveals, he was posing for Orpen for the present work, as well as The Chess Players.

Although the latter features Grace, not Emily, the two pictures are linked, in that both contain the same drop-leaf table, with Everard as passive onlooker, leaning this time on a chair-back.3 Of the two, Interior, while being less finished, is more enigmatic. It probably pre-dates the Oxford canvas and may possibly have been left incomplete because Orpen realised that it was close in spirit to an important work recently completed by his future brother-in-law. This was William Rothenstein’s The Doll’s House. (Rothenstein had married Alice Knewstub, Grace’s elder sister, in June 1899. As is well-known, Augustus John and Alice posed for The Doll’s House).

The Doll’s House by William Rothenstein (1900).

Rothenstein’s canvas was much admired in 1900 when it won a silver medal at the Exposition Centennale in Paris. Much discussion, then and now, revolves around its relationship to the ‘New Woman’ and ‘Degeneration’ issues that emerged from Ibsen’s plays – particularly in the female character, Nora, who dominates A Doll’s House.4While Orpen certainly shared Rothenstein’s fascination with the theatre, and the current intellectual debate, no evidence has come to light to support the contention that Interior derives from a literary source – beyond what we see in the painting. This might include the oddly positioned window which is more like a window on a stage flat than a real one.5 Other apparent inconsistencies in the realization may well be the result of reworking and positively add to its intrigue.[6] What was Orpen thinking? Was ‘Ibsenism’ and the literary debate part of the talk in The Newcomes and what direction did he wish the picture to take?

1 Merlin Holland and Rupert Hart-Davis, eds., The Complete Letters of Oscar Wilde, 2000, (Henry Holt & Co, New York), page 726. Alice and Wilfrid Meynell were one of the most powerful literary couples of the late nineteenth century. Alice (née Thompson) the sister of the battle painter, Elizabeth Butler, achieved renown as a poet and essayist, while her editor husband was a cousin of the Falmouth painter, Henry Scott Tuke. Both Meynells were keen art lovers and wrote for The Magazine of Art and The Art Journal, while Wilfrid edited the four-volume compilation, The Modern School of Painting (n.d. c. 1887); see June Badeni, The Slender Tree, A Life of Alice Meynell, 1981, (Tabb House, Padstow).

2 Everard Meynell (1882-1926) wrote art criticism for the Pall Mall Gazette as well as volumes on Bellini and Corot. His best-known publication is, however, a life of the poet Francis Thompson. In 1908 he married the singer, Grazia Carbone. Around this time, he also opened a shop in Museum Street – ‘Serendipity’ – dealing in rare books and prints. This was closed at the time of the Great War when Meynell became a gunnery instructor. By the early twenties he was suffering from tuberculosis; see Badeni, 1981, pp. 200, 236, 244.

3 The same table also appears in A Window, London Street, 1900 (National Gallery of Ireland), and The Refugees, 1900-1905 (Private Collection). A note from Orpen to Everard (Private Collection), postmarked 14 June, or 14 July 1901, asks him to come for a sitting on ‘Saturday afternoon instead of Sunday’ as ‘the model’ cannot come that day and ‘Sunday is the only day I can get her for a week’. This was undoubtedly Emily, as it would seem unusual for the artist to refer to the woman he would be marrying in a few weeks as ‘the model’.

4 An extensive literature on this subject, stretching back to Sydney Grundy’s The New Woman (1894) and the English translation of Max Nordau’s Degeneration (1895), draws its impetus from Ibsen and impacts directly on the theatre subjects of the period; see William Rough, ‘A ‘penchant for the dramatic’: William Rothenstein and Modern Theatre’, in Samuel Shaw ed., In Focus. The Doll’s House, 1899-1900 by William Rothenstein, Tate Research Publications, 2016, accessed 20 April 2021.

5 Orpen’s window motifs – a picture-within-the-picture – originate at this point and extend throughout his work. In the present instance, like the door jamb (?) on the left, this window is difficult to read as it appears to have no recess, and what at first appears to be sky in the upper portion, may well be rough yellow plaster, consistent with a view at a subterranean level.

6Pentimenti around both figures suggest that they have been reworked, while the presence of a third figure is discernible under the thin paint in the doorway on the left.