The painting was to be on display at the Irish Horse Exhibition at National Gallery Ireland from 25th April – 16th August 2020 but the exhibition was cancelled due to Covid 19.

‘Sergeant Murphy and Things’ by Sir William Orpen is depicted with the jockey who rode him to victory in the 1923 Grand National, Captain ‘Tuppy’ Bennet. The character on the left is the horse’s owner, Stephen ‘Laddie’ Sanford, and the man next to him is his trainer, George Blackwell. The man leaning against the oak tree is the artist Sir Alfred Munnings. 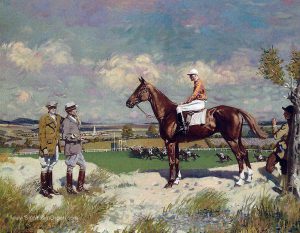 Sergeant Murphy was a chestnut gelding by General Symons out of Rose Graft, bred in Ireland by G.L. Walker in 1910. By the time he died, the sixteen year old horse, was a veteran of an astonishing seven Grand Nationals, spanning the period 1918-1925. By the time of the 1922 Grand National, the steeple-chaser had been acquired from Benson by Stephen ‘Laddie’ Sanford, a young American undergraduate at Cambridge, with the intention of using him in the Leicestershire Hunts. However, being too much for the new owner to handle, he was placed under the Newmarket trainer George Blackwell. In the 1922 Grand National, with C. Hawkins up, he finished fourth, despite falling at the Canal Turn. However, ridden by Captain G.N. ‘Tuppy’ Bennet, he won the Scottish Grand National, at Bogside near Ayr, in April the same year. Glory and success came in the 1923 Grand National, run at Aintree on 24 March, when Blackwell became one of a select band of trainers who could boast a Grand National and a Derby winner, having won the 1903 Derby with Rock Sand. With the starting price 100 – 6 against, wearing No. 10, the thirteen year old Sergeant Murphy, again ridden by the leading amateur jockey, Captain G.N. ‘Tuppy’ Bennet, carrying 11 stone 3 pounds, won by three lengths, in the fast time of 9 minutes 36 seconds. Only six of the original twenty eight starters finished. It was the first ever Grand National win for an American owner.

The price of £500 which Orpen got for the painting indicates that ‘Sergeant Murphy’ was not a commissioned work. Orpen’s studio book records payment of £1500 being received for Lord Dewar’s own portrait, the following year, 1924. It is likely Lord Dewar saw it in the Artist’s studio, when he was there to discuss his own portrait, and decided to buy it ‘off the easel’. Lord Dewar, as an owner and breeder and also with an interest in painting, would undoubtedly have been interested in the work. He would also probably have been able to appreciate the playful innuendos (and Things) Orpen included within the work; more of which will be said later. 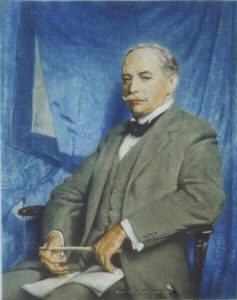 Sir William Orpen had a friendly rivalry with Sir Alfred Munnings, who was widely considered the best sporting artist of the 20th century. While the two were stationed in France as Official War Artists during World War I, they found themselves both painting at the Canadian Cavalry Headquarters. Munnings, who was painting a portrait of Prince Antoine of Bourbon on horseback, ran out of sable brushes. He found Orpen and asked him three questions: if he had a car (which he did); if he had any sable brushes; and if so, would he mind lending Munnings some brushes? Orpen kindly handed Munnings all of his sable brushes. The next day Orpen asked Munnings for the brushes back. Munnings quickly reminded him of the first question about the car and told Orpen he could damn well drive to Paris and get some more (Orpen, An Onlooker in France, page 66). The rivalry between the two great artists perhaps reached its conclusion in this painting — quite impressively Orpen’s first attempt at a horse portrait. It is often said that this work was an endeavour to prove that Orpen could paint a horse portrait that would rival those of Munnings. Orpen, after all was one of the most fashionable portrait painters, a prodigy from Dublin” who had taken London society by storm. Munnings was equally as fashionable but had the advantage of a reputation as a painter of horses and men. Sergeant Murphy was first exhibited at the Royal Academy in 1924 and, unsurprisingly, was compared with Munnings’ works in the same show. Munnings remembers reading a review of the show “about Orpen’s picture of Sergeant Murphy saying that the Irishman’s picture was better than mine of the grey horse, that my horse’s head was too small (Munnings, The Second Burst, page 153). Many elements within Orpen’s painting of Sergeant Murphy are, in fact, borrowed motifs from Munnings’ oeuvre. The oak tree is a notable example as several of Munnings patrons went so far as to request oak trees in their commissioned paintings. Chris Pearson, a scholar of Orpen, even suggests that the man leaning against the oak tree in Sergeant Murphy & Things is Munnings himself — a tongue-in-cheek nod to Munnings, reputation as the top horse painter of the day. Munnings was commissioned to paint Sergeant Murphy after he won the Grand National. 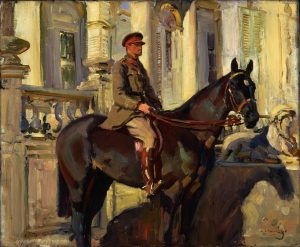 Orpen, in his studio book referred to the work as ‘Sergeant Murphy’, for its first showing at the Royal Academy Summer Exhibition in 1924, he gave it the very curiously cryptic but very deliberate title ‘Sergeant Murphy and Things’. By the addition of ‘and Things’ in the title, Orpen was saying that indeed there is more to this picture and that there are other aspects to the work that are not so readily obvious. Orpen probably did not want to make some of these things too obvious to the vast majority of the general public, as they may partly refer to an ‘in joke’, primarily for consumption within his own circle of acquaintances. For example, Orpen includes a favourite Munnings device, an oak tree. In Orpen’s work, the tree on the right with presumably Munnings leaning against it, is lifted from one of Munnings pictures of the 1919 Grand National winner, Poethlyn, entitled ‘Major Hugh and Mrs Peel’s Poethlyn‘. 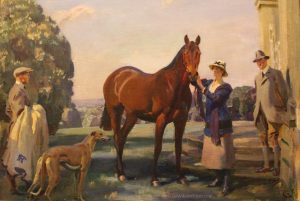 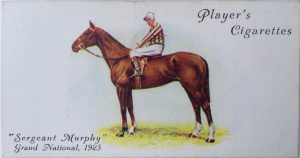 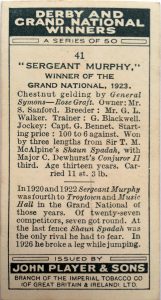 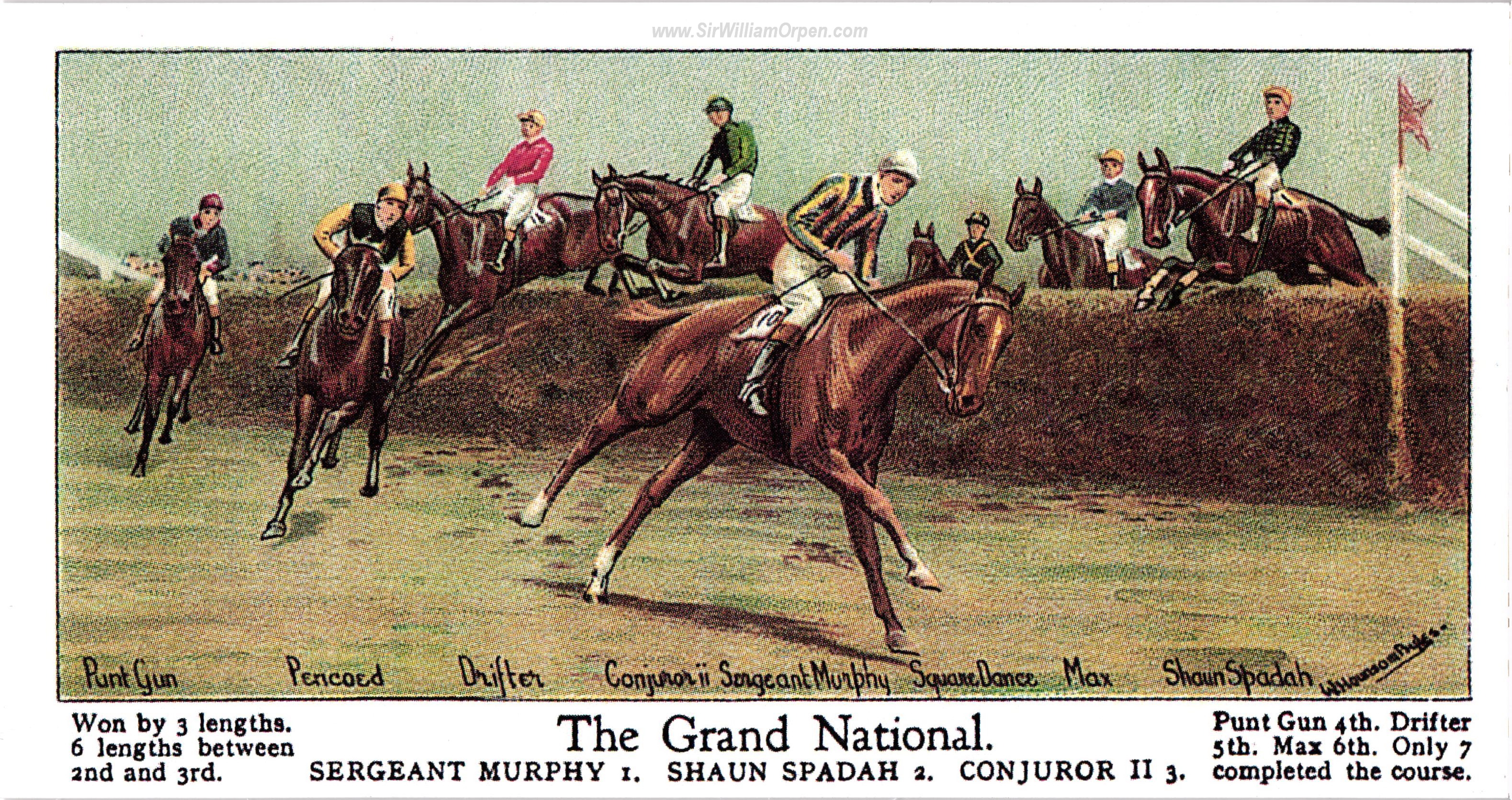 This work appears to be in overall very good condition. The canvas is taut and stable. There is some very minor craquelure visible on close inspection above the horse’s head and above the figures on the left. This appears stable and has not led to flaking of the paint.