Grace & Mary Orpen on The Cliffs at Howth

‘The Artist’s Wife and Daughter’ (Grace & Mary) on the Cliffs at Howth, Dublin.

Pencil and watercolour on off-white paper, laid down.

Signed and dated William Orpen 1910 in pencil at the lower right. 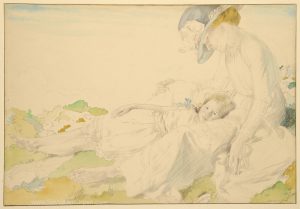 The watercolour will be exhibited at The Frieze Masters fair in Regent’s Park, London
and will be included in Stephen Ongpin Fine Art upcoming catalogue and exhibition, Master Drawings, in January 2018.

Throughout his career, William Orpen was greatly admired as one of the finest
draftsmen of his day. As the critic of The Art News noted on the occasion of a
publication of a portfolio of reproductions of Orpen’s drawings in 1915, ‘These drawings
are remarkable not only for their delicacy of handling, but for the loving care with which
the pencil has reveled in beauty of form. Mr. William Orpen is thoroughly modern, yet
he continues a tradition which has been handed down from the great draftsmen of the
past. His work does not suffer when placed by the side of the work of the Old Masters, a
supreme but dangerous test’2 Another critic, writing at the same time in The Ladies’
Field, noted that ‘ Mr. Orpen may be described as a tender draftsman, tender in his
care of and love for his materials. His hand is so marvelously delicate. His pencil hovers
over the paper with the grace of a butterfly. He does not strive for the beauty of feature,
as the French draftsmen of the eighteenth century tried to capture those qualities. At
times he is almost ugly and brutal; but he never loses the beauty of form’3

This splendid large sheet, drawn in a fine pencil with light touches of watercolour,
depicts the artist’s wife Grace and daughter Mary on the clifftop at Howth Head in Co.
Dublin, where the family were on their summer holidays. Orpen and Grace first visited
Howth in 1907, and rented a house called ‘The Cliffs’ there for a number of summers
afterward. The house enjoyed a spectacular location, overlooking Dublin Bay with the
city in the distance; as Orpen was to write several years later, ‘The view looking towards
the mainland in the evening, from the top of the Hill of Howth, is wonderful and ever-
changing’4 It was during these August vacations that Orpen was at his happiest, enjoying
the company of his young family and freed, at least temporarily, from the pressure of his
many formal portrait commissions. As his friend and biographer P. G. Konody noted,

‘These pictures of life by the sea and among the Irish hills…of open-air sketching and
children playing, breathe the spirit of physical well-being and freedom from mental
worries. They are filled with sunlight – the mild sunlight of a damp climate – and
caressed by the gentle breezes of heaven.’5

Orpen produced several paintings, watercolours and drawings of his family while at
Howth, mainly between 1909 and about 1913. As a recent scholar has noted, during this
period the artist ‘ managed, on top of everything else, to produce a magnificent series of
works, conceived and drawn out of doors, mainly at Howth, and taking as their subject
matter the everyday human material that surrounded him.’6 His favourite subjects were
his wife and his two daughters; Mary, known as Bunnie, born in 1902, and her sister
Christine, known as Kit, who was born in 1906. As Kit recalled in later years, ‘He paid
half a crown an hour a sitting for those portraits – a fortune in those days…Only an hour
at a time and then a dash along the cliffs for a bathe – golden days.’

The present sheet may be compared stylistically with a number of drawings made at
Howth in 1910 and 1913, some of which were published as a portfolio of ten
photogravure reproductions by the Chenil Gallery in London in c.1915. ’7