A three Act light comedy for one night only (Sunday, January 15th, 1928) by Arthur Wimperis (from the French of Alfred Savoir).

The Play was for the Benefit of The Green Room Rag Society Fund, including the auction of the original drawing by Sir William Orpen of the backs of Adam and Eve which is reproduced on the catalogue cover. 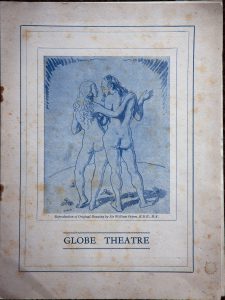 The auctioneer caused some laughter when he assured the audience that the man in the sketch was not Willy Clarkson (1861 – 1934). Clarkson was a well-known theater costume designer and wig-maker. The male nude does look like Orpen’s one time friend and fellow artist Augustus John but this is unlikely as they had fallen out some years earlier.

The sketch sold for £60 after a false bid for £70. The total raised from the night was £910, announced by Fred Terry (1863 – 1933) actor and theatrical manager, famous for his beautiful voice and his role in ‘The Scarlet Pimpernel’.
The Censor refused to license the play due to its ‘naughty bits’ and ‘suggestive lines’. It was only permitted on the basis that it was a one night only performance for charity. However, later the same year, Margaret Bannerman took ‘Sexes and Sevens’ to Australia, where it was staged in Sydney’s Criterion Theater featuring some of the same actors including Margaret Bannerman herself, and Francis Lister. As Miss Bannerman let it be known that the piece had been refused a license by the British censor, there was some curiosity to know why, and doubtless that this had ensured a certain amount of box–office activity.

The play is about Mado, the daughter of a financial baron who inherits her father’s fortune and follows in his footsteps. She is way too busy to get married so she takes a ‘Master’ by the name of Albert, pays his expenses to Cannes, Biarritz, and Paris under the name of ‘Madame X’. But one of Albert’s lovers turns up claiming to be his Madame X and when the truth is revealed Albert decides to teach Mado a lesson – ‘it is simply not cricket for a woman to do what men do’. He spends her money like it’s going out of fashion, leaving Mado to seek her mother’s advice on how to get rid of him. Her mother, however, wants Mado to marry Albert.

I won’t spoil the ending in case it makes an appearance on a stage near you. 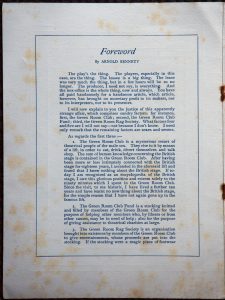 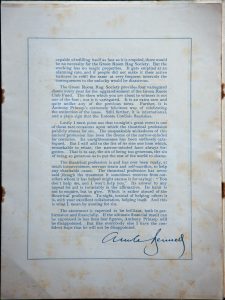 Presented by: – Anthony Prinsep. Born in London (1888 – 1942). Anthony Prinsep was the son of the Royal Academician, Valentine Prinsep. He owned or managed several London theatres. Together with his wife, the actress, Marie Lohr (1890 – 1975) who starred in plays by Bernard Shaw and acted alongside Sir Gerald du Maurier (see below) as Lady Ware in ‘The Ware Case’ (1924). Anthony Prinsep led the management of London’s Globe Theater from 1918 to 1928. This one night play marked the last night of Mr. Prinsep’s ten years’ management of the Globe Theatre.

This was not the first time that Mr Prinsep had asked William Orpen to produce a drawing for a charitable theatrical event. As a member of the General Committee of the King George’s Pension Fund for Actors and Actresses he asked Orpen to produce an illustration for the program to accompany the Special Matinee Performance under the patronage and in the presence of Their Majesties the King and Queen for E Temple Thurston’s ‘The Wandering Jew’ in aid of King George’s Pension Fund for Actors and Actresses at The Theater Royal Drury Lane, which took place on Monday May 23rd 1927.

Sketch by William Orpen for ‘The Wandering Jew’ by E Temple Thurston. Thurston was a poet, playwright and author, from Suffolk (1879 – 1933).

Sexes and Sevens was Produced by: – Lieutenant-Colonel Stanley Bell C.B.E., (1882 – 1952). General Manager at The Globe Theatre. The author of ‘Essentials of Stage-planning’ 1949. Acted in ‘A Message From Mars’ and produced ‘The Merchant of Venice’, ‘Diplomacy’ and ‘Our Betters’.

Mastard – Leslie Lincoln Henson. Born in London (1891 – 1957). Here’s a 1912 recording of him singing ‘Meet me Round the Corner’. https://archive.org/details/LeslieHensonMoyaMannering

Mado – Margaret Bannerman. Born in Canada (1896 – 1976). She was acclaimed for her performance as Lady George Graystone in ‘Our Betters’ by Somerset Maugham which ran for 548 performances at the Globe Theater, London.

Jacques – Allan Aynesworth. Born in Sandhurst, Berkshire (1864 – 1959). Played the lead part in the 1895 world premiere of ‘The Importance of Being Earnest’ by Oscar Wilde.

Assistant Manager – Sir Gerald du Maurier. Born in London (1873 – 1934). Du Maurier cigarettes are named after him. He was President of the Actors’ Orphanage Fund (now the Actors’ Charitable Trust).

Valentine – Helen Haye. Born in India (1874 – 1957). Featured in the 1944 British movie ‘Pussy by Gaslight’ which the American censor changed to ‘Man of Evil’ and chopped out the naughty bits.

Scenery for Sexes and Sevens by Harkers.

*Alfred Savoir – Born in Poland (Russian Federation) as Alfred Poznanski (1883 – 1934). Awarded the French Legion of Honour in WW1. His plays included ‘Catherine the Great’ and ‘Bluebeard’s Eighth Wife’ which was made into a film in 1938 starring Gary Cooper.

The Globe catalogue forms part of a collection of William Orpen letters and material recently acquired by The National Gallery of Ireland.