Sotheby’s London auction 23rd Nov. 2021 includes 4 works by Sir William Orpen along with Sir John Lavery, Jack B. Yeats, Paul Henry, Sean Keating and many more (some of which are from the Michael Smurfit Collection). 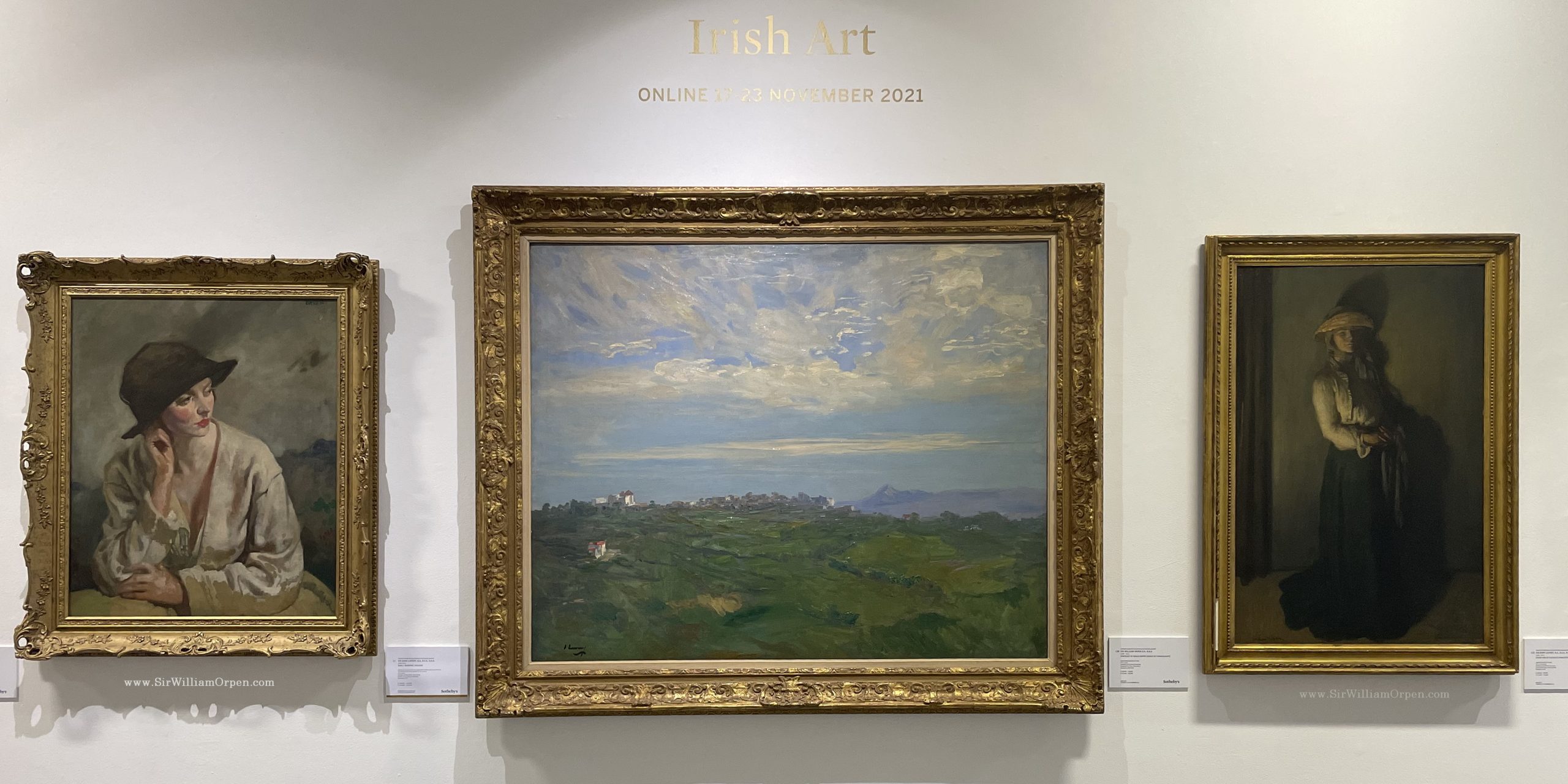 Here are the four Orpen works: – 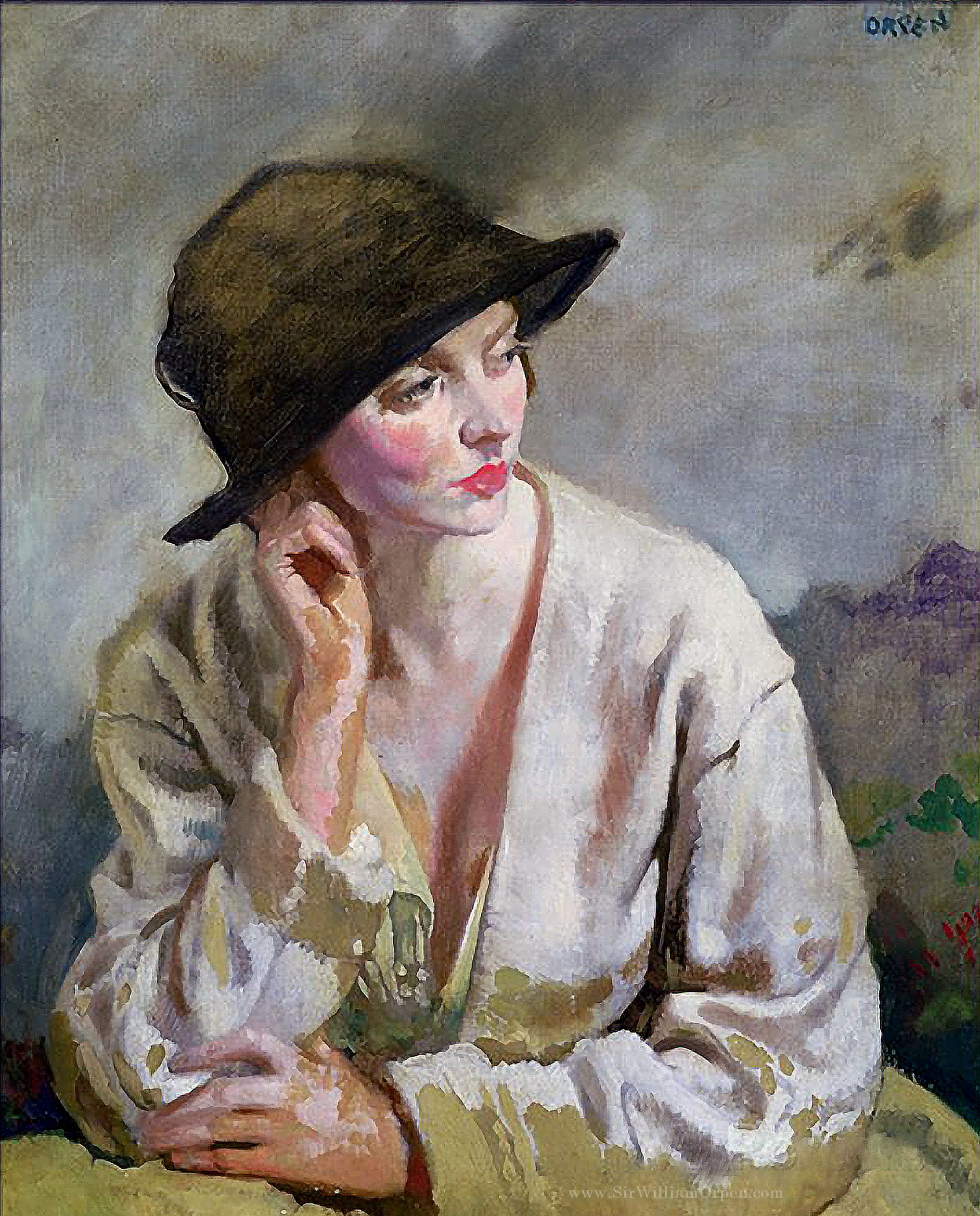 A Woman Thinking – A Portrait of Miss Sinclair by Sir William Orpen. 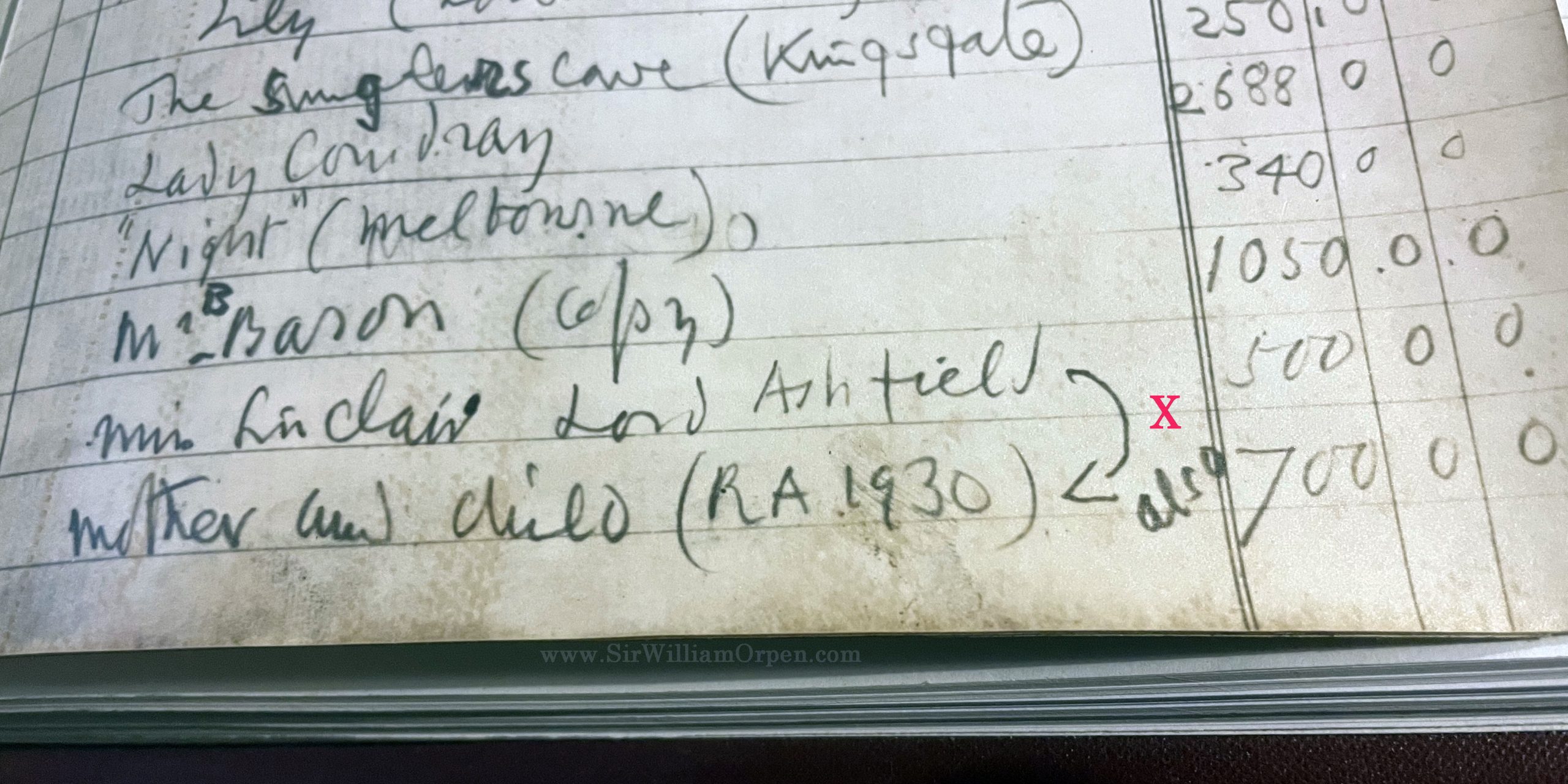 Listed as painted in 1930 but that was the year Orpen sold it to Lord Ashfield for £500, it’s more likely he painted it c.1912 as the background depicts a view of Dublin Bay from the cliffs of Howth. Orpen had not been to Howth since WW1. Also, she is wearing an Irish bainin jacket, similar to the one worn by Vera Hone in the “Blue Hat / Angler” series from the same era, (text continues after each image).

Theo Snoddy in his book, ‘Dictionary of Irish Artists 20th Century’, Wolfhound Press, 1996 (page 26) makes reference to Frances Beckett (1880-1951) who married William Sinclair ‘The Boss’ c.1908, a friend of William Orpen. The Sinclair’s had a cottage on the Hill of Howth were they kept open-house for the poets, writers and painters of Dublin.

Kenneth McConkey suggests ‘Miss Sinclair’ was painted in 1930, that she may be a daughter or a sibling of the Sinclair’s (above) and that the inclusion of Dublin Bay in the background was simply Orpen reflecting back on the ‘good old days in Ireland.

Exhibited: Royal Academy Winter Exhibition, 1933, No. 5 (Gallery Number I) as “A Woman Thinking”. 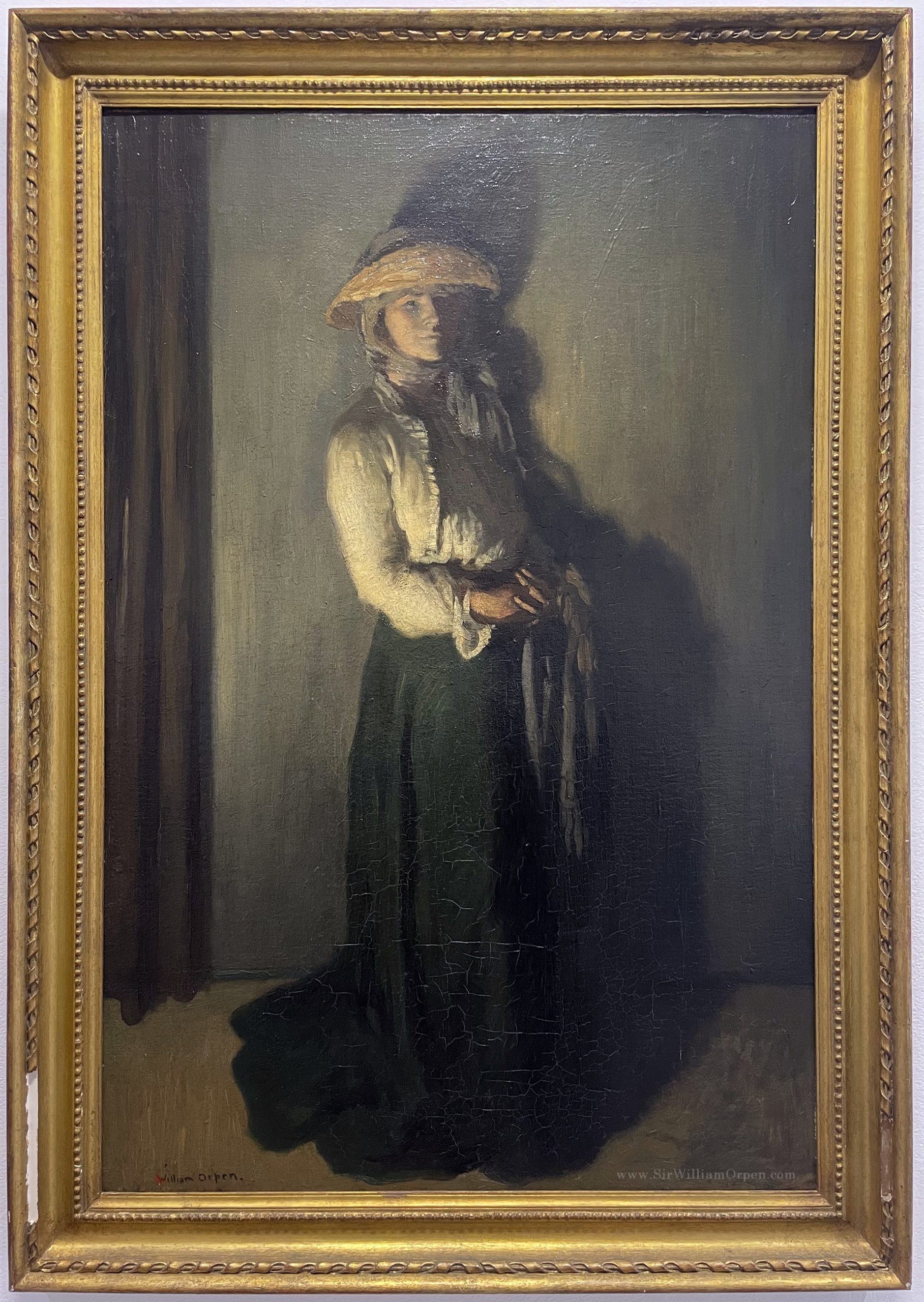 Also referred to as Grace by Artificial Light.

Pyms Gallery, London
Private Collection, which was acquired by Sir Michael Smurfit in 1988.

“Painted by Orpen (Grace Knewstub’s future husband), probably in the winter of 1899-1900. Grace is wearing the chiffon scarf, straw hat, and the clothes, which she wore at Vattetot, Normandy in the summer of 1899 at a honeymoon party that included her recently married sister Alice and her husband William Rothenstein, Augustus John, William Orpen, Charles Conder and Herbert Everett. Grace took some persuading before she would pose at all. Her elder sister, Alice, advised against it and there are references in letters from Orpen to Grace about this. The painting was probably done in Orpen’s basement studio at 21 Fitzroy Street which he shared with a group of artists including Augustus John. Although John was also in love with Grace, she married Orpen in the summer of 1901. 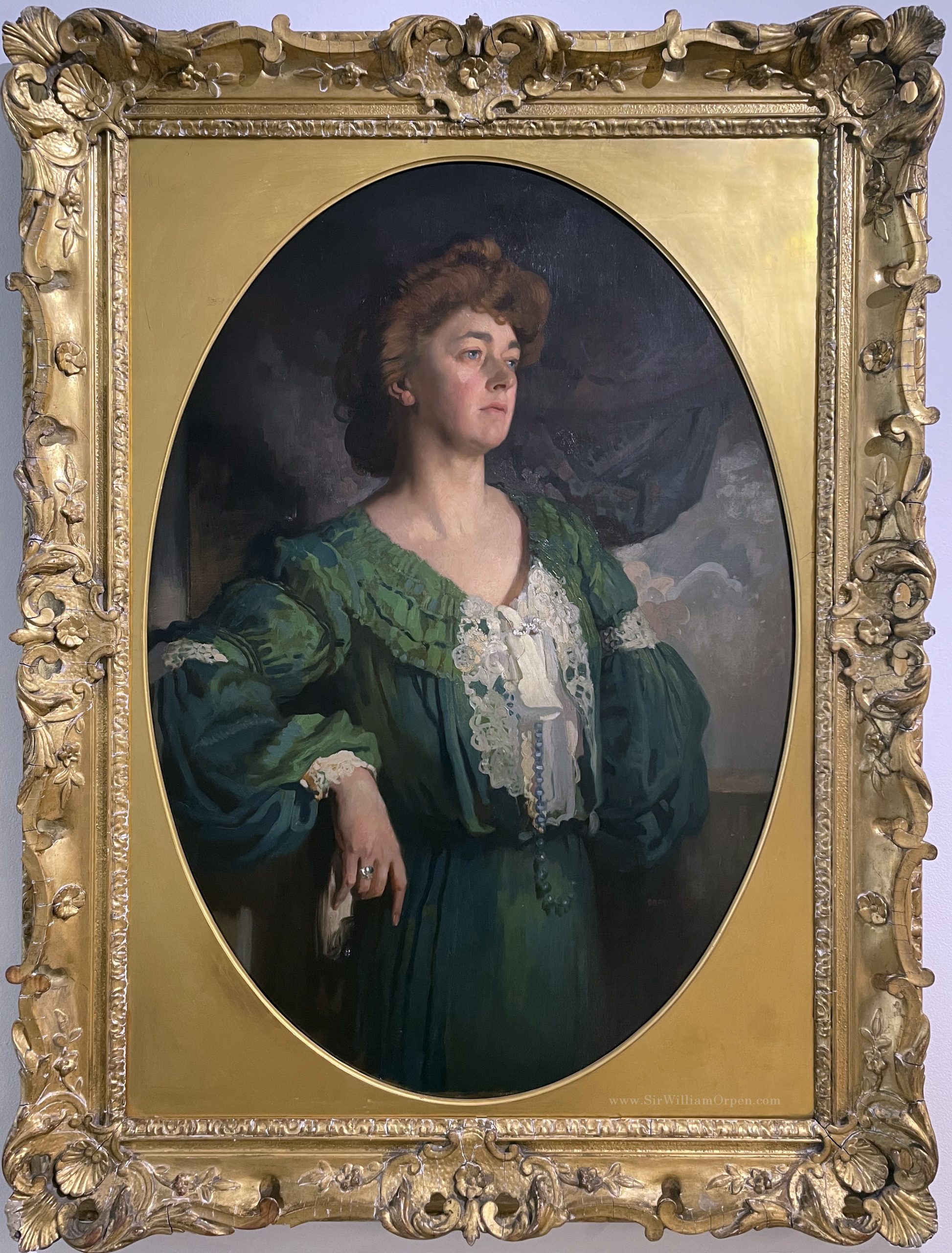 Portrait of Mary, Lady Gerard in a Green Dress by Sir William Orpen (1904).

In May 1903, the young Orpen encountered the recently widowed Mary Emmeline Laura, Lady Gerard (1854-1918). A grande dame from the infamous ‘Marlborough House Set’, Lady Gerard was the daughter of Henry Beilby Milner, second son of the fourth Baron Milner. Her husband, William, second Baron Gerard (1851-1902), was an army officer with an estate at Eastwell Park in Kent, a large Tudor mansion that had previously been tenanted by Prince Albert, Edward VII’s younger brother.

As Arnold recounts, the present commission originated with the completion of Orpen’s portrait of the sitter’s nephew by marriage, Lord Scarborough, at the end of 1902. Upon arrival in May 1903, the young painter discovered that the house party consisted of ‘Duchesses, Dukes, Ladys (sic) Viscounts etc’, and his grand entrance was the occasion of a Chaplin-esque debacle on a slippery floor (Arnold 1981, page 117). When the weekend party dispersed, he settled down to work, attended only by the sitter’s daughter, an aged Lady’s maid, and another Lady ‘far on in consumption’. These unusual circumstances meant that Orpen was nervous when completing his work, and yet before he left Eastwell Park, he was able to report to his wife, Grace, that ‘they think Lady Gerard’s portrait is very like her, which is lucky’ (Arnold page 118). He charged £75 for the painting.

Despite his misgivings, approval by the sitter’s friends and family signified that Orpen had intuitively understood what was required of him. Of a different era, Lady Gerard would expect, even in a work of this size, a sense of the grandeur of her social status. She was not paying for Sargent, but her portrait should, nevertheless, command the room in which it hung. The eye should first be captured by her brilliant chrome green dress, before pausing on her likeness. A parapet, swags, and the suggestion of cumulus clouds complete an ensemble that might complement a Reynolds or Gainsborough sitter, while the fall of her delicate fingers from a glorious sleeve should be worthy of Van Dyck (for example, Sir Anthony Van Dyck, Lord John Stuart and his brother Lord Bernard Stuart, c. 1638, National Gallery, London). 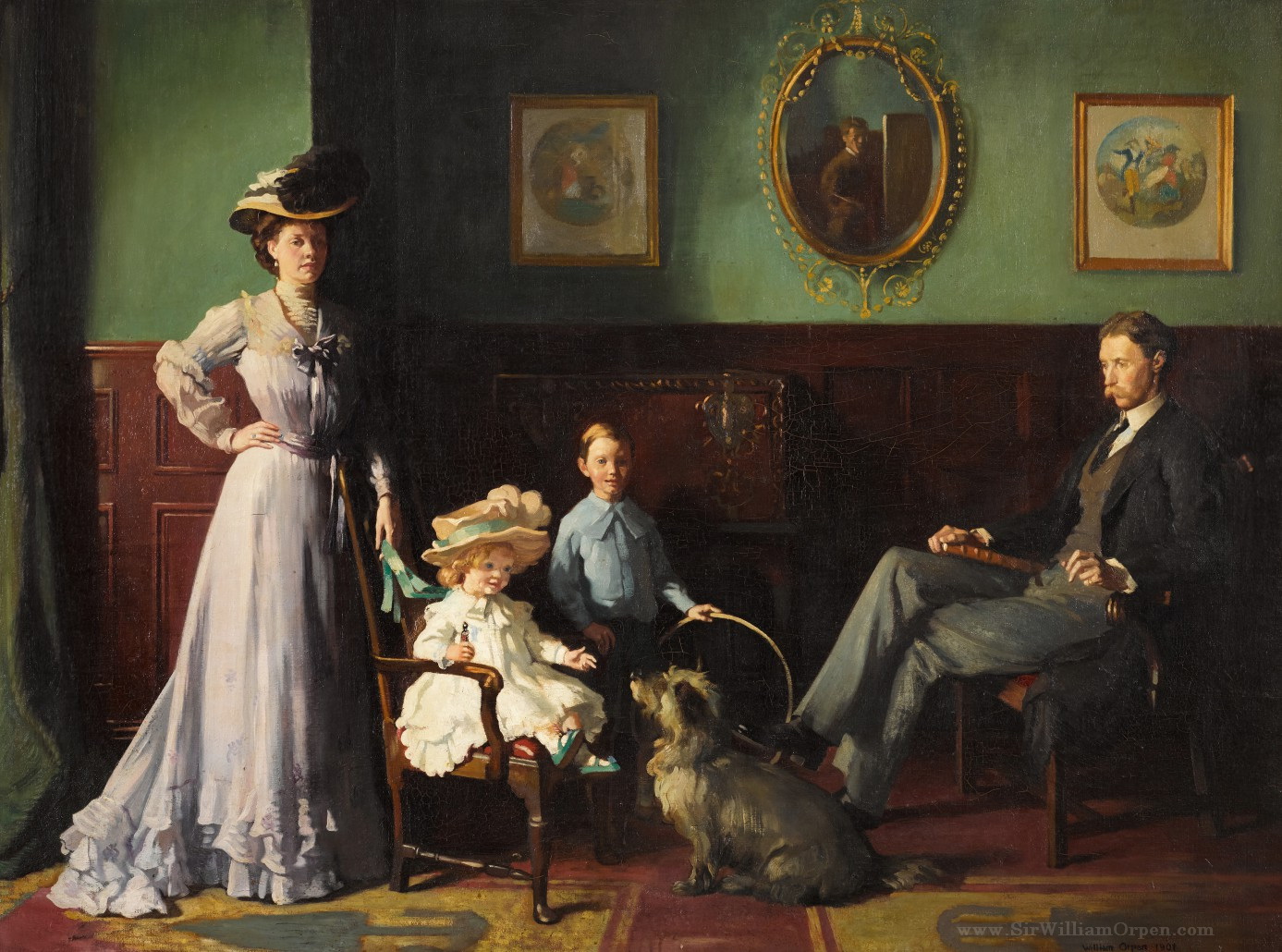 The Swinton Family by Sir William Orpen (1901). Note Orpen paints himself in the mirror.

Property of The Swinton Family.

Captain George Sitwell Campbell Swinton CBE DL (1859 – 1937) was a Scottish politician and officer of arms. Awarded a CBE in 1928.

Following text is an extract from Sotheby’s catalogue by Kenneth McConkey.

In 1900, on the advice of John Singer Sargent, Captain George Sitwell Campbell-Swinton (1859-1937), of Kimmerghame House, near Duns in the Scottish Borders, commissioned the young impoverished William Orpen to paint his family portrait. The painter had left the Slade School of Fine Art in the previous year and had only just begun to exhibit his work in the New English Art Club. That the captain should seek the American painter’s advice can probably be accounted for in the fact that his wife Elizabeth, (née Ebsworth 1874-1966), known as ‘Elsie’, had already been painted by Sargent, some three years before – Mrs George Swinton (1897, Art Institute of Chicago, Wirt D Walker Collection).