Charles Hughes ran a bookshop in St Ann’s Square, Manchester called Sherratt & Hughes. The same shop with was destroyed by an IRA bomb in 1996, then owned by Waterstone’s.

Charles Hughes was very friendly with Hugh Lane who probably introduced him to William Orpen.

William Orpen wrote to Grace “If the child could keep steady there might be some chance”.

In 1977 Clara Hughes wrote about the experience “I was very frightened of him”. The portrait was well received by the Hughes family although Orpen was not too impressed with it.

His inexperience with children did change for the better over the years although he refrained from painting portraits of them. 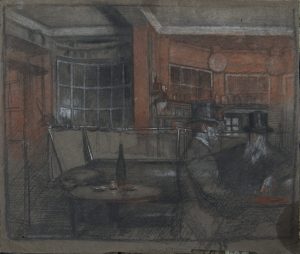 The Gentleman on the left is possibly Charles Hughes.