CAPTAIN WOODS OF THE ROYAL INNISKILLING FUSILIERS, by William Orpen (1919). 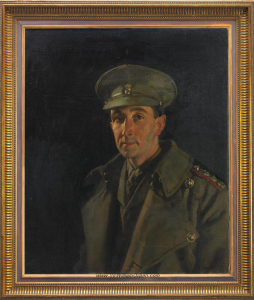 Description:
Title: CAPTAIN ROBERT JOHN WOODS OF THE ROYAL INNISKILLING FUSILIERS, 1919.
Note: The Great War left Orpen ill and exhausted. Having experienced recurring bouts of what was described as ‘blood poisoning’, he fell prey around the time of the Armistice to the second, deadly wave of Spanish flu that swept Europe. In the care of his brother and being nursed by Yvonne Aubicq, he was back on his feet in the early weeks of 1919 and contemplated leaving Amiens to paint in the now ‘liberated’ German towns. The Ministry of Information in London, however, had other plans. He would be dispatched to Paris to paint military men and statesmen – ‘The Frocks’, as he christened those in the latter category – now assembling for the Peace Conference in the Salon de l’horloge, of the Gare d’Orsay. It is thought that Captain Woods’s portrait was painted around this time. Robert John Woods hailed from Enfield Street in the Shankill Road district of Belfast and while full details of his war service remain for further research, it is likely that he was assigned to Paris, like Orpen, as an aide-de-camp. He served as a Second Lieutenant in the 3rd Battalion of the illustrious Inniskilling Fusiliers – this, at the beginning of the war was regarded as a ‘militia’ or reserve battalion that was assigned to the Western Front early in 1915. It suffered huge casualties as part of the Ulster Division on the Somme in the following summer of 1916 and as a wounded officer, with the rank of Captain, Woods was ‘invalided out’ from active service the following year. His final discharge came in July 1922.† As the Peace Conference project unfolded, Orpen’s portrait list grew longer and as Bruce Arnold points out, a distinction emerges between soldiers and statesmen (Orpen, Mirror to an Age, 1981, pp. 360-1). The latter portraits are swift, and in some instances, almost caricatural, while the former receive much less cursory attention. For Orpen these army officers and their men were the true victors, but they had no place in the emerging political pantomime. This explains the sympathy and sensitivity we observe in the Woods portrait. A handsome fellow has lost his youth, his greatcoat weighs him down, and behind his eyes are the horrors he has seen. Long, slow looking, patience, and an accurate eye provide for great psychological penetration in Orpen’s picture of this quiet Ulsterman in uniform. Professor Kenneth McConkey, November 2019† According to Army papers Woods’s enlistment address was 58 Enfield Street, Belfast, but this had changed to 21 Kerrsland Drive, Strandtown, Belfast at the time of his discharge. We are grateful to Gordon Power for his research into military records and his identification of the sitter.
Provenance:
Christie’s, London, 10 June 1983, lot 73. Private collection, Canada.
Waddington’s, Toronto, 12 June 2012, lot 147. Private collection, Canada.
Above text from Whyte’s Catalogue.
______

Very little information is available on Captain Wood or Woods however, records from Inniskilling Fusiliers show a Lieutenant R. Woods (with an S) who was discharged in 1915 due to his nerves.

Sadly there is no photograph of him so it’s hard to confirm 100% if it is the same man. His discharge card also refers to him as a Captain but there is no information about him being appointed a Captain. 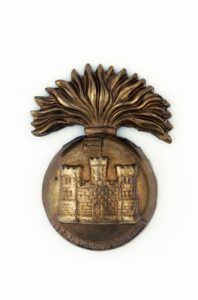 Badge of The Royal Inniskilling Fusiliers. 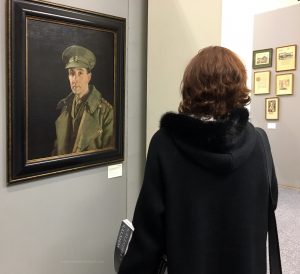 Captain Woods on display at the RDS Dublin.

*Mr. John Cox, a famous restorer in London, relined the painting. There is a photographic record taken by Cox of the original canvas with the name: “N. Dunsmuir” in the upper left of the back.