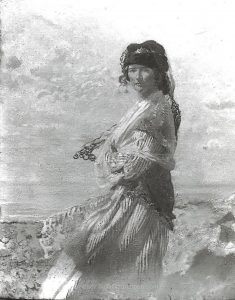 Deliberate / Intentional comparison with Monet – influence  & aspiration of 1910, characterised by a number of his works – especially the composition.

Seeks to achieve the same / similar atmospheric effect whilst still maintaining a greater control over / regard for line – probably as ingrained response to his Slade training – the Slade method with its emphasis on draughtsmanship.

They represent an intermediate stage in his experimentation / development as soon through the Howth works. By 1912 with the Tent Series the work is much looser as the emphasis moves from line towards colour – work is much looser and the line less defined. Not yet ready to fully embrace the Impressionist ideal – where line is virtually non-existent.

Orpen puts his own twist – in Monet’s pair the sun is in the same place, it is the umbrella that is reversed – tells us this along with the light – wind also in the same direction.

Orpen on the other hand still turns the lady but chooses to emphasis it more subtly by the movement of the light source – Again time lapse same subject different lights – was something Monet indulged in.

Under-scored in line by the Slade Tradition – but not yet ready to relinquish.

It’s as if Orpen has taken Monet’s works as preliminary studies, for his own oils.