‘The Bar in the Hall-by-the-Sea, Margate’

Private Collection.
Oil on Canvas : 36 1/4 x 28 1/4 inches.
Signed ‘Orpen’.
(Photo of painting by Priory Studios).
Picture of a gentleman standing behind a bar at ‘The Hall by the Sea’ pleasure complex.

The Hall by the Sea was opened in 1867 using the booking hall of a railway station built by the London, Chatham and Dover Railway, but never used as a station because of opposition from the South Eastern Railway, owners of the nearby Margate Sands station. Initially leased by catering contractor Spiers & Pond (station buffets and refreshment cars) who christened it ‘Hall by the Sea’ and opened it as a dance hall. The venture was not a success and they pulled out in 1870. The building was sold to the Mayor of Margate – Thomas Dalby Reeve for £3750.  In February 1874 the premises was acquired by ‘Lord’ George Sanger (1825 – 1911) a circus proprietor and used as a restaurant and ballroom. Sanger was not a real Lord (as in Peer of The Realm). He was murdered with a hatchet by an employee who then committed suicide by throwing himself under a train. 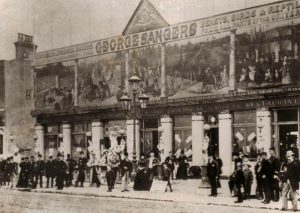 In 1898 the railway station structure was replaced by a purpose built hall. In 1919 it was purchased by John H. Iles who developed the site as ‘Dreamland’ amusement park and continued to operate, despite various ups and downs, until 2005, when it closed. However, because of the efforts of local residents it re-opened in 2015 and is still open. 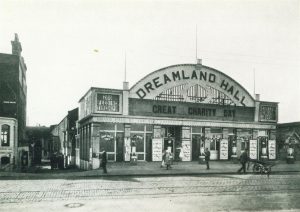 In about 1903, Max Beerbohm introduced William and Grace Orpen to William and Mabel Nicholson, and the couples soon became firm friends. Orpen even allowed Nicholson to share his studio. “The Bar in the Hall-by-the-Sea” was painted when both families (four adults, six children and a nanny) went on holiday together in Margate in 1907 and 1908. They stayed either in Cliftonville, a part of Margate in Thanet, Kent, or in Kingsgate, part of neighbouring Broadstairs.

Photo of Grace, her daughter Bunny with the Nicholson’s – Tony, Ben and Nancy outside the Captain Digby Hotel, Margate. Circa 1907-8. Nancy is holding a Kodak Box Brownie camera.

Photo of William Orpen with his daughter Kit opposite the Captain Digby Hotel, Margate. Circa 1907-8.

Grace and Mabel seemed to have been particularly exuberant. Margueritte Steen, Nicholson’s biographer and companion in later life, puts it thus: “it was singular, how these two young women, sedate and reserved when apart, went crazy whenever they got together” (Marguerite Steen, William Nicholson, Collins, London, 1943, pages 104-105), and she and Ben Nicholson both recall that whilst the two couples were out taking the evening air walking along the beach at low tide, Orpen and Nicholson, deep in conversation, suddenly realised their wives were not with them, only to discover them almost up to their necks in the sea, wearing evening gowns as yet unpaid for.

Orpen painted a number of works whilst in Margate, including two versions of Grace and Mabel in the mouth of the Digby Cave, in Kingsgate Bay, which still exists, although now much eroded, just below the Captain Digby Hotel. One version is in the Mildura Arts Centre, Victoria, Australia, and the other was sold at Sotheby’s London on 29th March 2011, “Digby Cave, Number 1”, Lot Number 11, for £73,250 (including buyer’s premium). 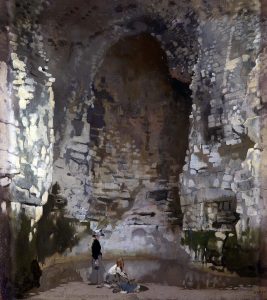 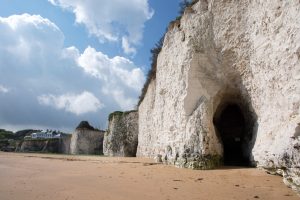 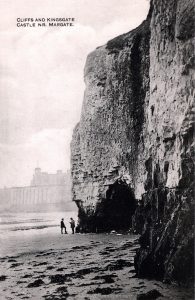 Photo of The Ballroom looking north, from the bar area towards the entrance and vestibule over which the orchestra was placed (circa 1903) – Hall by the Sea, Margate.

By the time of Nicholson’s and Orpen’s visit, the Hall-by-the-Sea was an entertainment complex; along with the ballroom, it also had a concert hall, promenade, Italian ornamental gardens, and the vestiges of a zoological garden / menagerie, which had been closed in 1905.

When using the ‘Hall by the Sea’ by William Nicholson as reference, there are similarities in decor and furniture that would suggest that this may well be “The Bar in the Hall by the Sea” – the tops of the chairs are similar, and both have a canopy over the bar area. 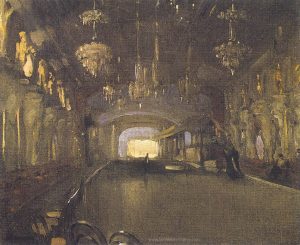 The Ballroom, as the two artists would have known it, was opened in 1898, and the newspaper, The Era, of Saturday 30th July 1898, gave a description of it:- “Approached through an avenue of glittering glass, the entrant comes to … a commodious entrance lobby and vestibule. This leads directly into the grand ballroom, one of the largest and most handsomely decorated public dancing-rooms anywhere within hundreds of miles. In the room and over the vestibule the orchestra has been placed. As a backing to this is a magnificently painted picture, 45ft. long by 15ft. deep (by L. Hart), a masterpiece of figure-work, the subject being, very appropriately, a ‘Bal Masque’, and the time sunrise. In this piece of work alone there are over 170 figures. The front of the orchestra is bas-relief panels of the Muses. Along the whole extent of the long ballroom are massive mirrors, over which are arched gas jets, with coloured glass globes, alternating between red, white, green, and pale yellow. Between each mirror has been placed a carved truss, reaching from the floor nearly to the ceiling, the pedestal top of which is ornamented with trailing plants, and on which stands a life-size gilded statue, surrounded with palms and tropical vegetation. Around the ceiling is a white frieze in relief, and the ceiling itself is a delicate French grey, with exquisitely painted Cupid panels, after the style of Louis XIV.”…… “The concert-room … is beyond and quite distinct from the ballroom, of which, however, it is a continuation. The refreshment bars have been placed between the ball and concert rooms”.

The mock, somewhat gaudy, splendour of the mirrored Grand Ballroom, with its bar’s  mirror backing, would certainly have picqued the interest of the artists; Orpen, with his fascination with the properties of mirrors, and Nicholson with his predeliction for surface reflections. The inclusion of the Thonet bentwood chairs, and a canopy over the bar area, in both of the artists’ pictures, links the two works. As no image has been found, it is not known exactly how Orpen tackled his untraced, Grand Hall-by-the-Sea picture, but the current work possibly owes something to Édouard Manet’s A Bar at the Folies-Bergère, 1882.

‘A Bar at the Folies-Bergère’ by Édouard Manet 1882 (The Courtauld Gallery, London).

The Ballroom also would almost certainly have had resonance, for both artists, with the mirrored ‘Domino’ Grill Room of the Café Royal, London; a haunt they both frequented. Orpen’s “Hall-by-the-Sea” pictures may also have been a precursor to his “Café Royal”, painted 1911-1912, largly comprised of a group of artists, all of whom, had an association with the International Society of Sculptors, Painters and Engravers.

During the 1907 holiday William Orpen returned to Ireland, leaving his family in Margate. He wrote to Grace from Dublin and addressed the letters to Northcliff House, Louis Avenue, Cliftonville, Kent (which borders with Broadstairs as well as to Northdown Cottage, later on).

There is no record of a Northdown Cottage in Cliftonville at that time, but there was one in the next village, of Northdown. This was owned and administered by Mrs Matthews. The location is in Old Green Road near the junction with Holly Lane. In view of its proximity to Cliftonville, there is a fair chance this is the correct address. The cottage is now two cottages known as East Cottage and West Cottage. 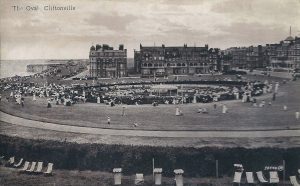 A postcard from the 1900’s showing The Oval, Cliftonville. 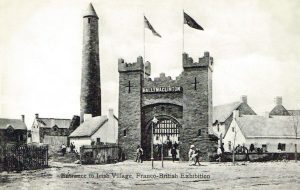 A postcard showing the entrance to the 1908 Franco British Exhibition.

The Irish Village of Ballymaclinton (sponsored by MacClinton’s Soap) was an exhibit at the Franco British Exhibition at the White City, London. It was a mock up of a ‘typical’ Irish Village. One of the buildings contained an Art Gallery, where examples of Irish Art, organised by Hugh Lane, were displayed.

Listed in an illustrated note from Orpen to Hugh Lane (item Number 3) in Arnold’s research papers with a price of £100 – With note “For insurance or sale”. The illustration is of Hugh Lane standing almost naked on a globe, which has British and French flags sticking out of it, and the words Franco British on it. 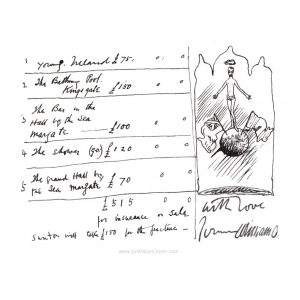 Also Exhibited at the following: – 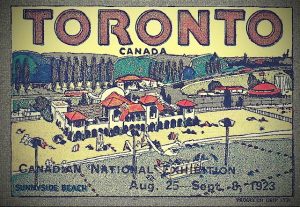 Postcard from the Canadian National Exhibition 1923.

National Gallery of Ireland, William Orpen Centenary Exhibition, 1978, as “At the Bar“, Number 84.

Provenance : Acquired by Grosvenor Galleries, London, by 1913. The gallery had re-opened the previous year and it is believed that Knoedler’s, art dealers, had an interest in it. The picture was sent for Exhibition in the USA, March 1914 (and originally had an unofficial working title ‘Landlord‘, but was exhibited under the title ‘The Bar’. It probably remained at Knoedler’s, New York and returned to London, July 1921, (Knoedler’s reference: London, 6961, and New York, 15228). Grosvenor Gallery Joint Venture with P.D. Colnaghi & Co.

Purchased from Hunter’s Gallery circa 1945.

Purchased from above by J. Hamilton Hunter, Dublin.

Purchased from Hunter’s Gallery circa 1947 by Lord Killanin, thence by descent.

Watch a movie history of Dreamland in the late 20’s (interesting to see the amusements were mostly used by adults in comparison to today’s dominance of young children and teenagers) : 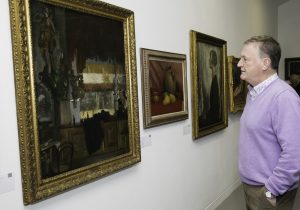