The assassination of Sir Henry Wilson and Sam Maguire’s involvement. 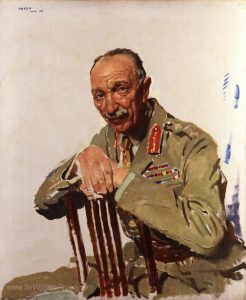 The 22nd June 1922 marks the anniversary of one of the most controversial episodes of the Troubles in Ireland with the assassination of the staunchly Unionist Sir Henry Wilson outside his home in Belgravia, London. Born in County Longford, Wilson was a friend of Churchill and the Northern Ireland Government’s adviser on security. His assassins were Reggie Dunne, deputy head center of the London branch of the Irish Republican Brotherhood (under Sam Maguire, of the celebrated cup), and one-legged Joe O’Sullivan. Both men were captured, convicted of murder, and hanged six weeks later.
The historian Tim Pat Coogan described the assassination as ‘one of the most indefensible, inefficient and hopelessly heroic deeds of its kind’.
Precisely how involved Sam Maguire was remains unclear. Dunne and O’Sullivan may have been acting of their own accord. They may have been following an order given by Collins some time previously. In 1953, Joe Dolan, one of Collins’s former intelligence staff, stated that Collins had given this order to Maguire who he, in turn, passed it on to Dunne and O’Sullivan. Coogan also believes the order was given directly by Collins and delivered via Peg ni Braonain, a young Cumann naBan member.
However, Collins denied giving the order. His supporters generally agree that he gave the order but, amid the excitement of the Treaty and ensuing debates, he either forgot or failed to cancel it. His detractors hold that Collins simply lied to save his skin, disowning Dunne and O’Sullivan in the process.
Britain demanded vengeance for Sir Henry’s death. Dunne and O’Sullivan appear to have been acting in support of the anti-Treaty forces who, headed up by Rory O’Connor, had been occupying the Four Courts since mid-April. Six days after Sir Henry’s assassination, under pressure from London, Collins ordered the Free State Army to bomb the Four Courts, thus igniting the Civil War. Sam Maguire was not the only person to be horrified by the Civil War that erupted afterward.
The memorandum pictured about Dunne and O’Sullivan is held at the Imperial War Museum in London. 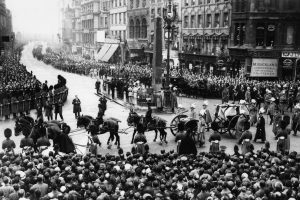 Photo of crowds paying their respects as the funeral procession of Field Marshal Sir Henry Wilson in London.

Thanks to Turtle Bunbury for permission to reproduce his text from www.facebook.com/Wistorical

N.B. Orpen knew the Wilson brothers as a student in Dublin, one was nicknamed ‘Drop-eye Wilson’, and the other (Henry) was known as ‘Rake-faced Wilson’.

It’s just over a century since Henry Wilson, the Unionist MP for North Down, was shot dead by two English IRA gunmen — Joe O’ Sullivan and Reggie Dunne — outside his home in Belgravia, London. On hearing the news, King George V penned a letter of sympathy to the newly widowed Lady Wilson. “I can find no words to express my grief at the appalling tragedy which has robbed you of your beloved husband and the country of one of its distinguished soldiers,” he wrote.

Publicly most of the British establishment echoed the sovereign’s sympathetic words, but “privately they would not have been displeased that so vocal a critic was gone, along with his increasingly outdated views on Ireland and the Empire” Ronan McGreevy writes in Great Hatred. The journalist and historian begins his account with a summary of Wilson’s career as a public servant. A native of Longford, he was the British government’s most trusted military adviser during the First World War and in March 1922 became a military adviser to Sir James Craig, the first prime minister of Northern Ireland. The appointment coincided with the announcement of a Special Powers Act, which discriminated against Catholics. Wilson was associated with the law from the beginning, making him a target for the IRA.

Using newly declassified material from Ireland’s Military Service Pensions archive, McGreevy focuses on who ordered Wilson’s killing in June 1922. A century later three main theories are still being debated: that Dunne and O’Sullivan (later hanged by the British government) acted alone, without instructions from a senior figure in the republican movement; that the anti-Treaty IRA sanctioned the assassination, which occurred just days before the civil war officially began in Dublin; or that the order came directly from Michael Collins, despite the truce of July 11, 1921. McGreevy believes (spoiler alert) all the evidence points to the last theory.

At the time of Wilson’s killing, Collins was chairman of the newly established Provisional Government in Ireland, having led the IRA during the War of Independence (1919-21).

The truce put the guerrilla conflict in a frozen stalemate, which eventually led to the signing of the Anglo-Irish Treaty in December 1921, of which Collins was a signatory. One of its terms was that a Boundary Commission, comprising three representatives from both sides of the border, as well as a neutral arbitrator, should decide the exact location of the border between the Irish Free State and Northern Ireland.

Unlike many of his colleagues in the provisional government, Collins did not trust that the commission would provide a long-term solution to partition. The author believes Collins favoured destabilising Northern Ireland instead, feeling this would result in a favourable political settlement for the nationalist minority, who were then being subjected to sectarian violence. According to McGreevy, Collins pursued this aggressive militant approach to Northern Ireland clandestinely.

As a theory, it’s hard to prove, mainly because there is no paper trail connecting Collins to Wilson’s murder. The author does provide enough evidence to make a convincing case, though. Collins, we learn, had sanctioned the cross-border kidnappings of dozens of loyalists in January 1922 and approved the smuggling of arms into Northern Ireland in May and June 1922 for a nationalist offensive that never materialised. “Collins lied to his own cabinet colleagues and to the British government about what was going on,” McGreevy claims.

There have been several other Wilson biographies, including Sir Charles Callwell’s two-volume Field Marshal Sir Henry Wilson, His Life & Diaries (1927), which portrayed him as a sectarian bigot. Great Hatred aims for a more balanced account. Here, McGreevy’s journalistic background works to his advantage as he makes judgments only about Wilson’s conduct when the evidence allows him to do so.

Still, there is no escaping that Wilson was “Anglo-Irish, an imperialist, and his country was the British Empire”, as McGreevy points out. He was vehemently opposed to the treaty, which he believed betrayed the conservative values, including law and order, binding the United Kingdom together. “Wilson did not believe the Irish had the ability to govern themselves,” McGreevy concludes. History, of course, was to prove the field marshal wrong. 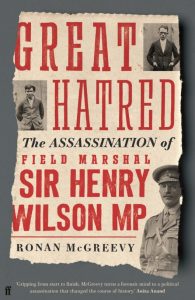