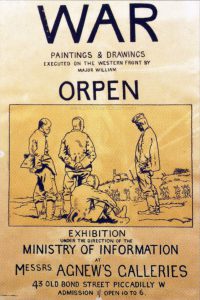 Lord Beaverbrook Minister of Information opened the ex­hibition of drawings and paintings on the Western front by Major William Orpen. He announced that the artist had intimated his intention to present the entire collection to the nation. The pictures, 125 in number, re­presented two years’ work under thrilling war conditions, and in declaring the exhibition open the Minister of Information paid tribute to Mr. Orpen’s versatility and genius. “We know of men who have given picture galleries to the nation”.

Lord Beaverbrook said. “We know of artists who have given pictures to the nation; but I think perhaps this is the only occasion on which an artist has given all the results of two years of labour, given it up quite freely and almost as a matter of course. I am sure in the hearts of every one of us there is a real, a deep, and a lasting debt of gratitude and obligation to Major Orpen”. 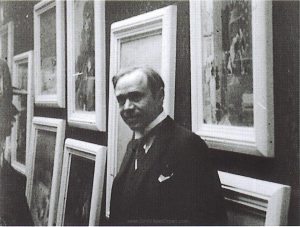 Lord Beaverbrook at the opening of Orpen’s exhibition at Agnew’s Galleries.

Most of the paintings are in The Imperial War Museum and Orpen was subsequently awarded the Order of The British Empire. 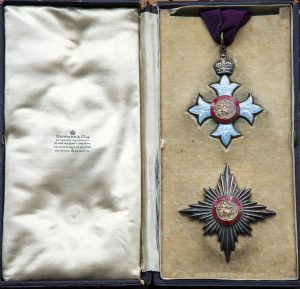 The King has been pleased, on the occasion of his Majesty’s birthday, (3rd June 1918), to give the Most Excellent Order of the British Empire, for services in connection with the war: – To be Knights Commanders –  Major William Orpen, A.R.A.

Critics – Good and Bad (Who are you inclined to believe, the soldier or the art critic?).

A soldier who was watching Major Orpen hanging his official war paintings at the Agnew Galleries in readiness for the opening of his one-man show, by Lord Beaverbrook, the Minister of Information, on Thursday next, [23rd May 1918], said. “What I like about Orpen’s stuff is that it is real. There is not a detail wrong. Orpen’s are real soldiers, waging real war in the real France. It is the real thing”.

Mr. William Orpen is an exceedingly clever and versatile painter, but the war is not his subject. It is true that Mr. Arnold Bennett, in a preface to the catalogue of Mr. Orpen’s paintings and drawings on the Western front, at Messrs Agnew’s, speaks of the imaginative sympathy from which their genuine emotion springs. But imagination, sympathy, and anything like genuine emotion are precisely the elements which in this show I find wanting. Its failure to convey the sense of the tragedy of war amounts, for my mind, almost to levity. “Dead German in a Trench,” which strains at the horrible, does not suggest it. “A Grave in a Trench” is merely melodramatic. “The Falling Bomb” in its manner gives opportunity for the relief of humour, but does not seize it. An exception can be made in the case of drawings where the artist has not indulged in self-conscious comment on the things seen.

I include the Catalogue Preface by the Novelist Arnold Bennett (1867 – 1931) simply because it is a beautiful piece of writing and a beautiful tribute to his friend- William Orpen.

To write an Introduction to the pictures of William Orpen is more than a work of supererogation; it is a piece of confounded cheek. He needs neither to be “taken down”, for his modesty inaccurate; nor to be “written up” for he is one of the most celebrated painters of the day. His pictures explain themselves in their own wordless language far better than any words can explain them. They explain themselves thoroughly, because William Orpen, in addition to being a distinguished artist, is a supreme craftsman. In the whole of history of graphic art there can be few artists who knew their job better than William Orpen knows his, and few who knew it as well. He is always equal to the situation. He never fails to fulfill his share of the unspoken contract which is implied between the painter and the beholder. He has the imaginative sympathy from which genuine emotion springs; and he has the eye, the brain, the hand. And that is all there all to it. In short, I do not know why I am writing this introduction-or rather, I do know. I am writing in under command, in an epoch when the general duty is to obey. Fortunate are they-and I count myself among them in the present instance-to whom obedience is a pleasure.

I wish to note two things about the exhibition. The first is that it demonstrates an untruth. War is monotonous. It is hellishly monotonous. This is the opinion of all soldiers, and it is the opinion of all artists who have seen the war. It is certainly the opinion of those who, like myself, are engaged in the affair of collocating the war-work of artists with a view to obtaining a more or less complete artistic record of the war. A famous art-critic said to me; “The mischief is that in war there are only six subjects for a painter”. Monotony is therefore inevitable. But William Orpen comes along and brilliantly disproves what everybody else knows in his heart to be a profound truth. So that we are obliged to limit the axiom a little and say: “War is monotonous – for all men except William Orpen”. He has found, not sixty innumerable different subjects. And thus his immense, fecund, tireless energy has been able to vent itself without inflicting the slightest tedium on the public. Surly no one can glance around these walls of diversity and not be astounded that their contents are the off-spring of a single individuality, produced with-in a very short space of time! I ought to remark, in passing, that even William Orpen could scarcely have accomplished what he has accomplished, in the brief period and in the difficult conditions imposed, if he had not apparently invented a special technique for the purpose. These pictures are painted in a new manner-in the artist’s “war” manner – very broadly, very rapidly, sometimes very summarily, perhaps thinly. Their success is largely due, apart from the reality of the inspiration, to an extreme competence in the choice and employment of means.

The second thing I wish to note is the singular freshness of vision, evoking a truly remarkable vivacity of invention, chiefly in the composition. William Orpen, having discovered a new subject, composes it newly. His resourcefulness is as reliable and unerring as that of Mozart. Landscape, shell-holes, ruined trees and buildings, dug-outs, tents, and the tragedy and comedy of human existence,-he sees them as though nobody had ever seen them pictorially before; and he arranges them in fresh patterns of contour, colour, and plane. His ingenuity in manipulating the material is simply endless, and yet he is never tempted to falsify the material. This is especially true of the figure-paintings.

And in figure-paintings, you can more plainly see the evidences of that taste for life and for all life which is at the bottom of William Orpen’s achievement and renown. “The falling Bomb”, “The Return of a Patrol”, “Poilu and Tommy”, “Highlander Passing a Grave”, “The Receiving Room”: in such pictures you have, in my opinion, William Orpen at his finest, with all qualities, including his astonishing competence, in full play. “The Receiving Room”, for me, has something in it of Daumier. The compliment is high.

And to get a more intimate notion of the artist’s idiosyncrasy, of his own personal way of savoring life, examine his portraits of himself.

Here is a small selection of the 125 paintings and drawings by William Orpen at the Agnew’s exhibition: – 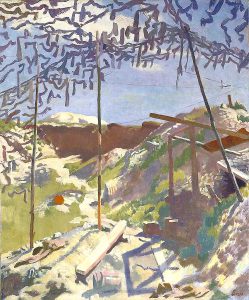 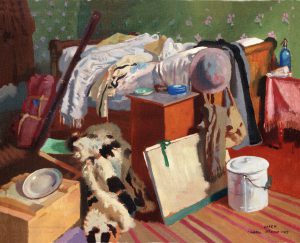 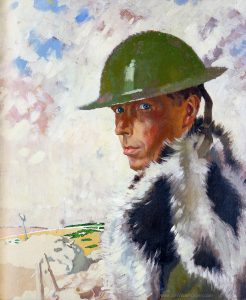 Self Portrait in Helmet 1917 by William Orpen. 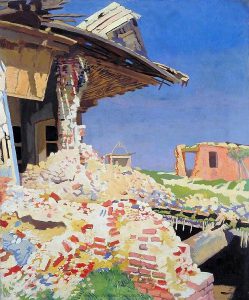 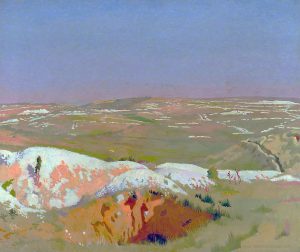 The Somme – A Clear Day; View From The British Trenches Opposite La Boisselle, Showing The German Front Line And Mine Craters 1917 by William Orpen. 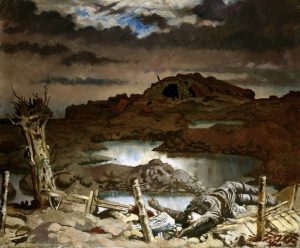 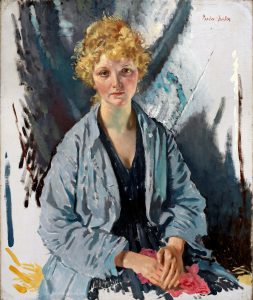