Aftermath – A Memory of the Somme by William Orpen

The Battle of the Somme took place in June 1916, William Orpen visited the site several months later – April 1917. While this sketch by Orpen titled “No Man’s Land” is a perfect accompaniment to his poem – A Memory of the Somme, the second image by Orpen, while not at the Somme perhaps gives one a better vision of what he witnessed. 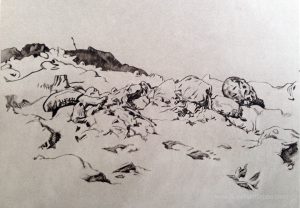 No Man’s Land by William Orpen 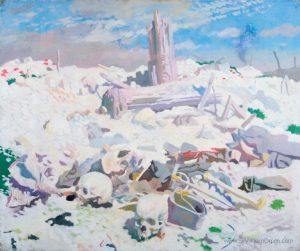 A MEMORY OF THE SOMME

A fair spring morning—not a living soul is near,

Far, far away, there is the faint grumble of the guns;

The battle has passed long since—

At times there is the faint drone of aeroplanes as

They pass overhead, amber specks, high up in the blue;

Occasionally there is the movement of a rat in the

Old battered trench on which I sit, still in the

Confusion in which it was hurriedly left.

The sun is baking hot.

Strange odours come from the door of a dug-out

With its endless steps running down into blackness.

The distance is all shimmering in heat.

A few little spring flowers have forced their way

He lies a few yards in front of the trench.

We are quite alone.

he has been there a long, long time—

Hundreds of eyes have seen him,

Hundreds of bodies have felt faint and sick

Then this place was Hell,

But now all is Peace.

And the sun has made him Holy and Pure—

He and his garments are bleached white and clean.

A daffodil is by his head, and his curly, gold

Hair is moving in the slight breeze.

Some great act of bravery for his comrades and Country—

Here he lies, Pure and Holy, his face upward turned;

No earth between him and his Maker.

I have no right to be so near. 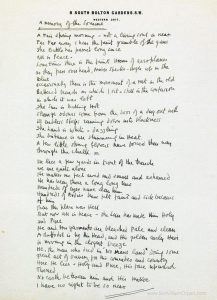 The 90th Anniversary of the Battle of the Somme was commemorated on an Irish postage stamp (2006) which included a sketch by William Orpen entitled South Dublin Horse: A Dubliner resting on his way to Arras Front (on the 1st issue envelope). The stamp is based on a painting entitled The Battle of the Somme (36th Ulster Div.) by J.P. Beadle. 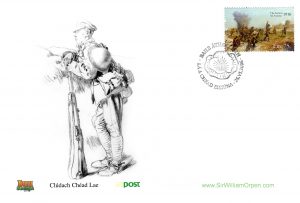