A study and a chalk of Grace by her husband William Orpen for auction.

William Orpen and Grace Knewstub married in London in 1901 and between 1908 and 1912 he and his family would visit annually to Dublin for their holidays. William had taken a summer teaching job at the Dublin Metropolitan School of Art and every August he rented ‘The Cliffs’ Howth from Nina Bellingham, the house had previously been used by artists Nathaniel Hone and Walter Osborne. William’s parents and siblings would often visit from Stillorgan.

Orpen painted several landscapes around the location using his wife and children as models. He also brought his students to Howth, including Seán Keating, Grace Gifford, Patrick Tuohy, Leo Whelan and Margaret Clarke. His teaching days ended with the outbreak of WW1 and he went on to be an Official War Artist.

Prior to the death of William & Grace’s daughter Kit, she made one last request – that her ashes would be scattered at Bellingham’s Harbour just below ‘The Cliffs’ where she had such happy childhood memories.

The second item in this auction is also of Grace Orpen: –

A label on the back of this drawing confirms it was once owned by Wyndham T. Vint, of Bradford, Yorkshire. A collector of twentieth century art, and occasional film producer, Benjamin Wyndham Theodore Vint (1882-1959) also owned works by Wyndham Lewis, Walter Sickert, Augustus John and Maurice de Vlaminck. Bradford was also the home city of William Rothenstein, who, in June 1899, married the actress Alice Knewstub. The couple honeymooned in Dieppe, before renting a cottage in the Normandy village of Vattetot-sur-Mer. They enjoyed their time there, inviting artist friends to join them. Among those who journeyed to Vattetot were Alice’s younger sister Grace Knewstub (1877-1948), and her friend Albert, Rothenstein’s younger brother. Also invited were William Orpen and Augustus John, fellow-students of Albert at the Slade School of Art. The Anglo-Australian painter Charles Condor, who had been best man at Rothenstein’s wedding, also made the trip. A brilliant student, that year Orpen was working on his The Play Scene from Hamlet, which would win a prize at the Slade, while Augustus John was also working on a scene from the same play. The group remained at Vettetot until late September. The following year, with Grace now modelling for paintings by Orpen, the couple married. They honeymooned in West Cork, staying at the Orpen family holiday home at Pearson’s Bridge.

An early work in Orpen’s oeuvre, this chalk portrait, with its ethereal, dream-like quality, evokes the work of the Pre-Raphaelites. It also echoes the contemplative pose adopted by Alice Knewstub, in a photograph taken around 1901 by George Charles Beresford (Tate). Orpen was out to impress his in-laws: Grace’s father, the artist Walter Knewstub had worked as studio assistant to Dante Gabriel Rossetti, while her mother Emily had modeled for Rossetti. It was a busy time for Orpen; in November 1901 he had his first exhibition, at the Carfax Gallery, which had been founded by Rothenstein, and the following year, along with Augustus John, he set up a teaching atelier in Chelsea. From then until 1914 he was also a visiting teacher at the Metropolitan School of Art in Dublin, where he influenced a generation of Irish artists, notably Sean Keating. By 1908, whatever happiness had existed between Grace Knewstub and Orpen had evaporated, with Orpen now devoting his time and talents to his wealthy American patron, and lover, Mrs. Evelyn St. George. Daughter of a New York banker, she was a distant cousin of Orpen, and secured for him a succession of prestigious portrait commissions.

Other paintings by Orpen depicting Grace on a windswept Howth (not in auction). 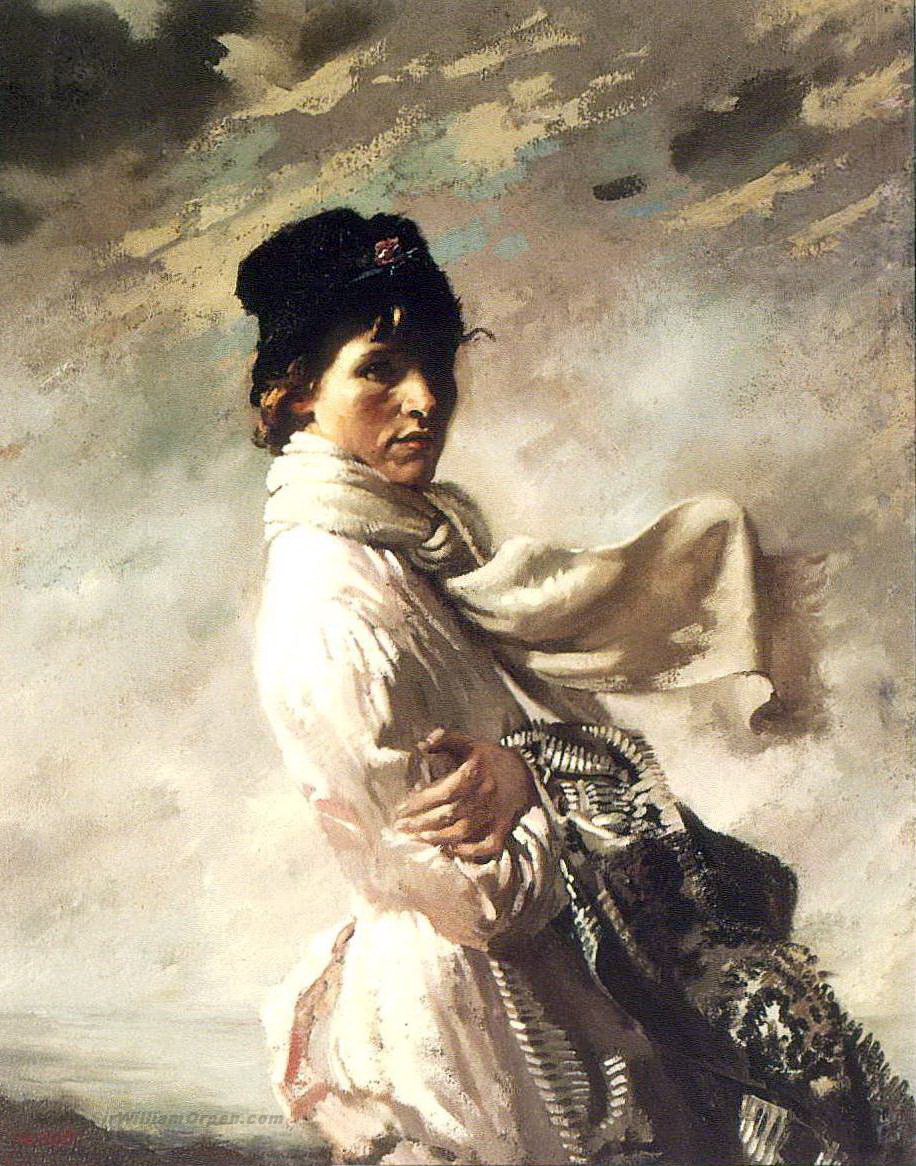 A recent photo of The Cliffs, Howth by Priory Studios.