Sir William Orpen R.A., R.W.S., R.H.A. (1878-1931). Undated letter by Orpen to his wife, letting her know that two portrait commissions he expected (Brighton School and Manchester) had gone to other artists, with an illustration of himself playing tennis.

Based on the information from the transcript below, I can guess that the letter was 1909. 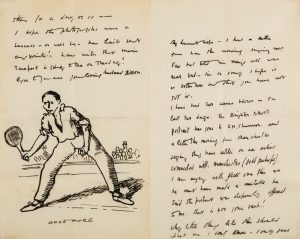 “My Dearest wife – I had a letter from Lane (Hugh Lane) this morning saying Mrs. Few (the Housekeeper) had told him Mary’s (William’s daughter also known as Bunny 1902 – 1947) cold was real bad – I’m so sorry. I hope it is better now and that you have not got it.

I have had two severe blows in the last two days. The Brighton School portrait has gone to C H Shannon (Charles Shannon) and a letter this morning from Manchester saying they have settled on an artist connected with Manchester (Dodd Perhaps). I am angry with Jack on this as he must have made a mistake, he said the portrait was definitely offered to me. That is 450 gone bash! Why little things like this should upset me I don’t know – I only feel them for a day or so –I hope the photographs were a success – or will be – had Laib sent over prints!  Lane  writes that Marie Tempest* is going to tea on Thursday! Love to you all, your ever loving husband Billion”.