William Orpen’s horse racing friends and a race horse named after him.

Orpen, a bay male racehorse, by Solario (1922), from Harpy, was born in Great Britain in 1928. Solario was bred at Adare Manor Estate Stud Farm, in Ireland by Windham Thomas Wyndham-Quin, 4th Earl of Dunraven (1841-1926), and had bought as a yearling for a bargain 3,500 guineas by Sir John Rutherford (1854-1932). Like his sire, Orpen was also owned by Sir John Rutherford, who had bought him for 6,700 guineas as a yearling. Orpen painted Rutherford’s portrait in 1928, and it is perhaps no coincidence that owner chose to name the colt ‘Orpen’, after the artist, the very same year as the artist was commissioned to paint his portrait, for £1600.

Although, in 1930, Sir William Orpen chose to add an imaginary painting of “Orpen – Run & Owned by Sir John Rutherford Bt.” (1st Baronet), to his interior portrait of the race horse trainer the Honorable George Lambton. 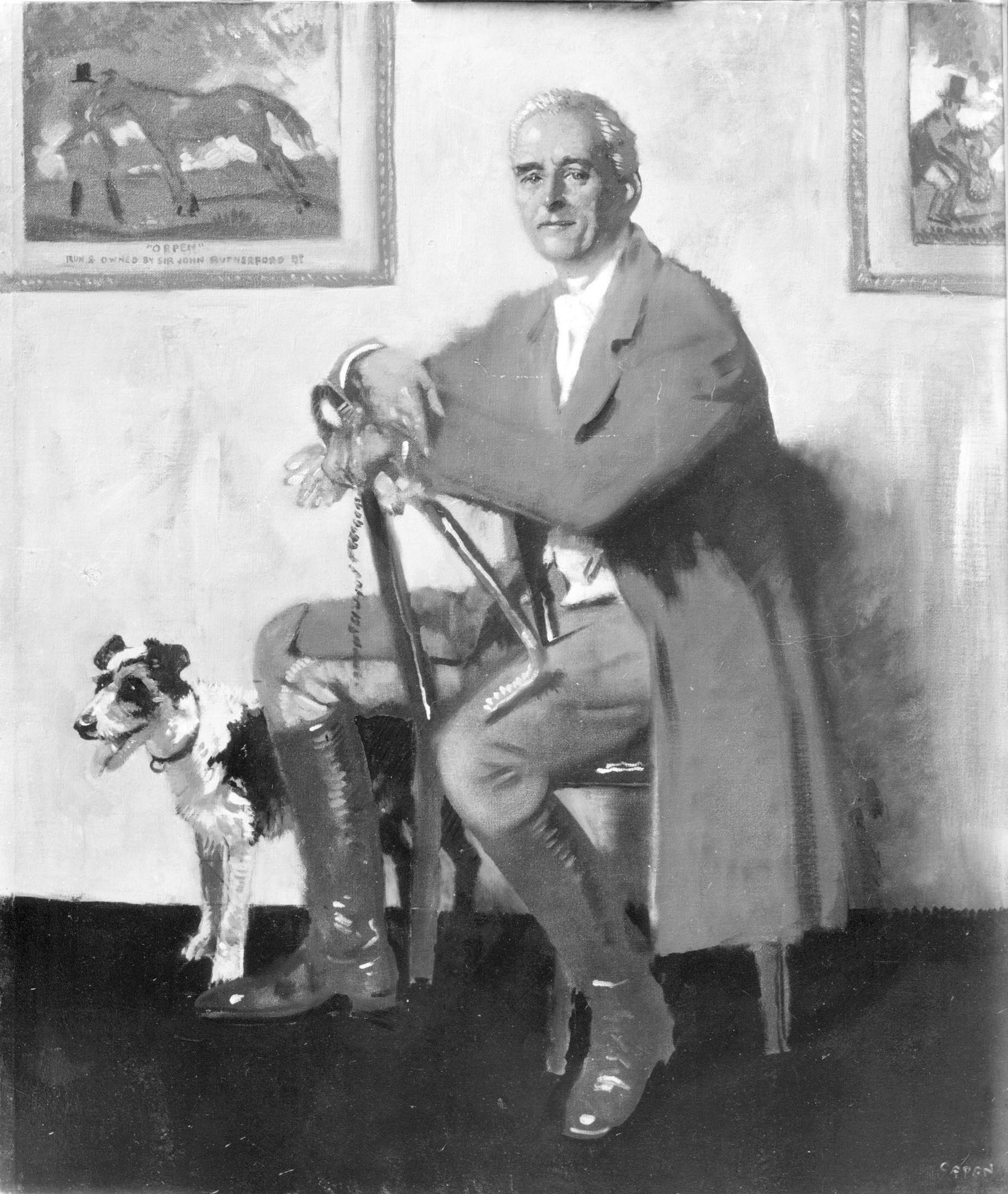 According to Cara Copland: the “Portrait was commissioned by Lord Derby and started May 1925. Sir William had several sittings, and then let the portrait drop. In 1930 he had it out of his store house, and made a picture of it – painting in most of the legs hands etc. from memory and putting in the terrier “Mr Funny” and the picture of Sir John Rutherford’s horse “Orpen”.” He then exhibited the picture at the Society of Portrait Painters, 39th Exhibition, Grafton Galleries, Octagon Gallery, November 1930, Number 6, calling it “A Sporty Gentleman, and Monsieur Funny”. Illustrated in catalogue, Plate II. 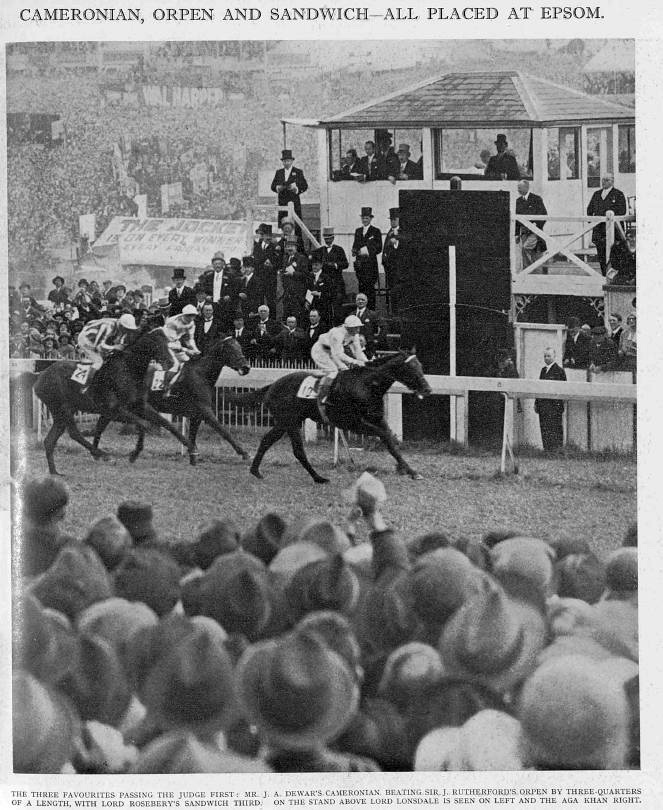 Orpen beaten by three quarters of a length – Cameronian, Orpen and Sandwich – all placed at Epsom.

Text reads: – The three favorites passing the Judge – First: Mr J.A. Dewar’s ‘Cameronian’, beating Sir J Rutherford’s ‘Orpen’ by three quarters of a length, with Lord Rosebery’s ‘Sandwich’ third. On the stand above – Lord Lonsdale is seen on the left and the Aga Khan right.

‘Orpen’, Sir John Rutherford’s race-horse by Solario – Harpy, was third in the Two Thousand Guineas, which was run two days before the Private View at the Royal Academy, where pictures by William Orpen, the Royal Academician, are exhibited. 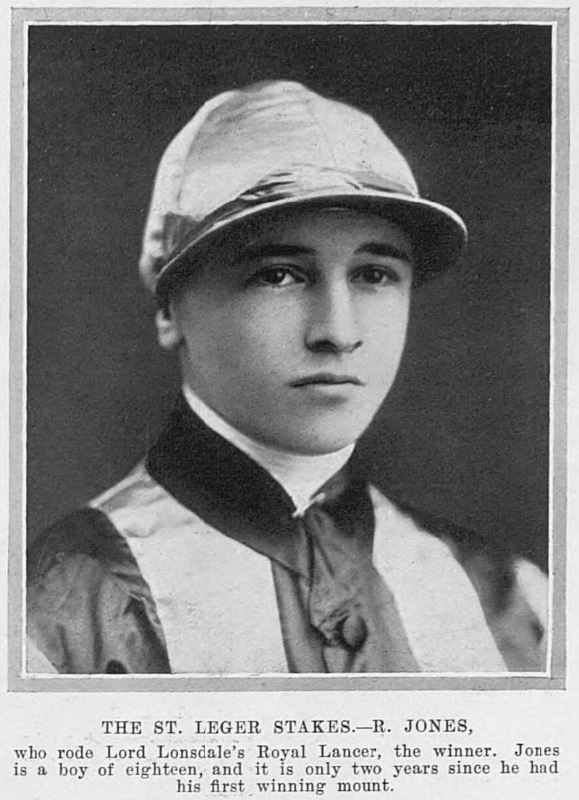 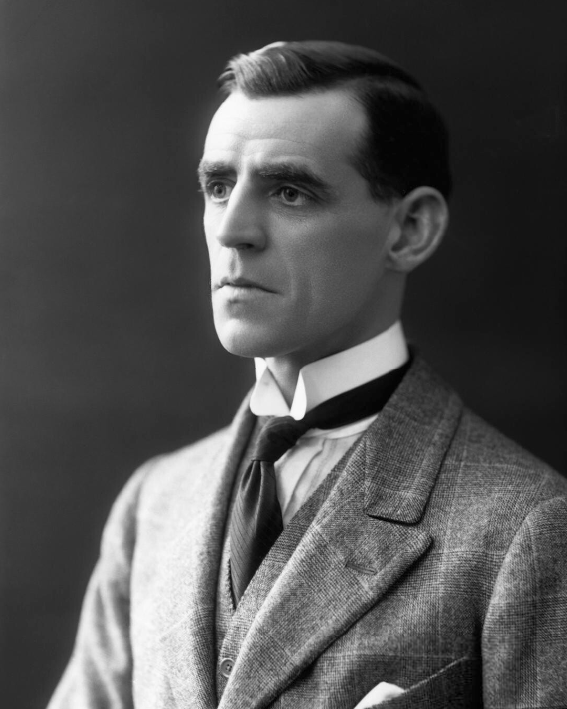 After the death of his owner, Sir John Rutherford, 26th February 1932 (see more below), Sir Alfred Butt (1878-1962), British theatre impresario, Conservative politician and racehorse owner and breeder, secured a bargain when he pur­chased Orpen at the sale of the late owner’s horses, at which point Orpen was transferred to Frank Butters’ stable. Frank Joseph Arthur Butters (1878-1958) was trainer to Sir Alfred Butt, among others, such as the Aga Khan. Between 1926-1930, Butters had replaced the Hon. George Lambton (1860-1945), as trainer, at Edward George Villiers Stanley, 17th Earl of Derby (1865-1948)’s Bedford Lodge Stables in Newmarket, Suffolk. 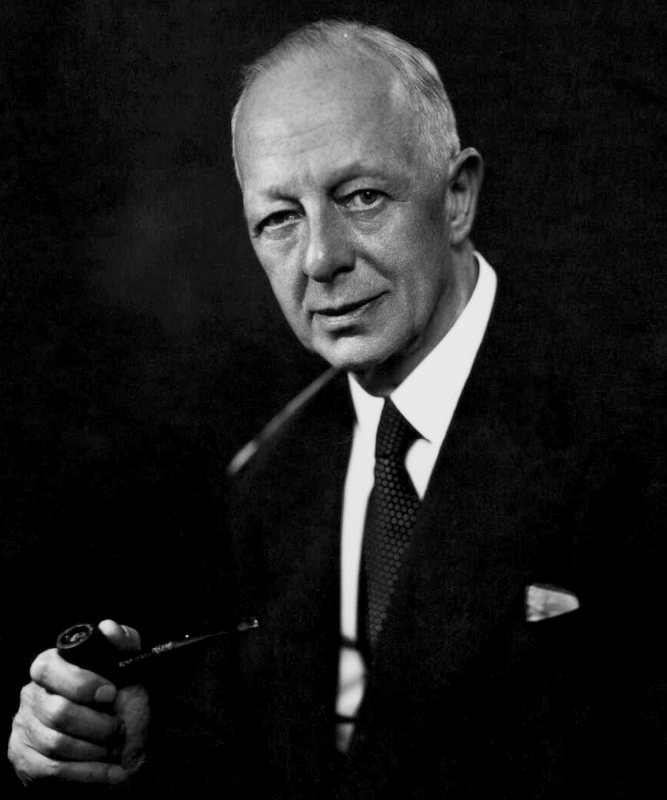 Orpen has been full for the past four seasons; but there might be a nomination or two vacant for him now. He is, however, not a really cheap sire as he is at £148. He has had some winners among his first lot to run and will get a lot more. Strangely enough, he was not too good looking as a two-year-old or as a three-year-old; but his children are good looking from the start. When he was racing, Orpen was a great favourite of mine. He was placed in each of the three Classics and then his owner, Sir John Rutherford, died and he was sold. Sir Alfred Butt bought him and, with any ordinary luck, would have won the Gold Cup at Ascot with him. He was second to Foxhunter, who had run second earlier in the meeting and was not expected to run again. 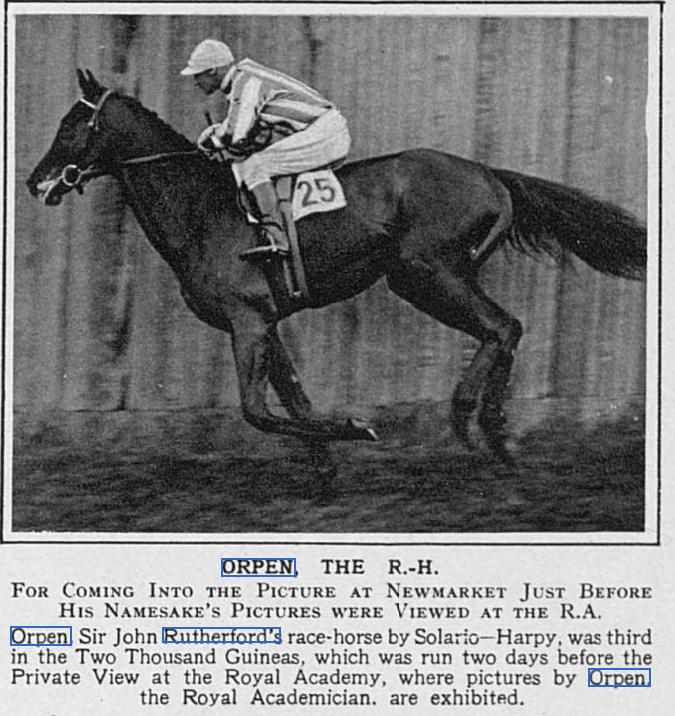 ORPEN, THE R.-H. [THE RACE-HORSE] For Coming Into the Picture at Newmarket Just Before His Namesake’s Pictures were Viewed at the R.A. 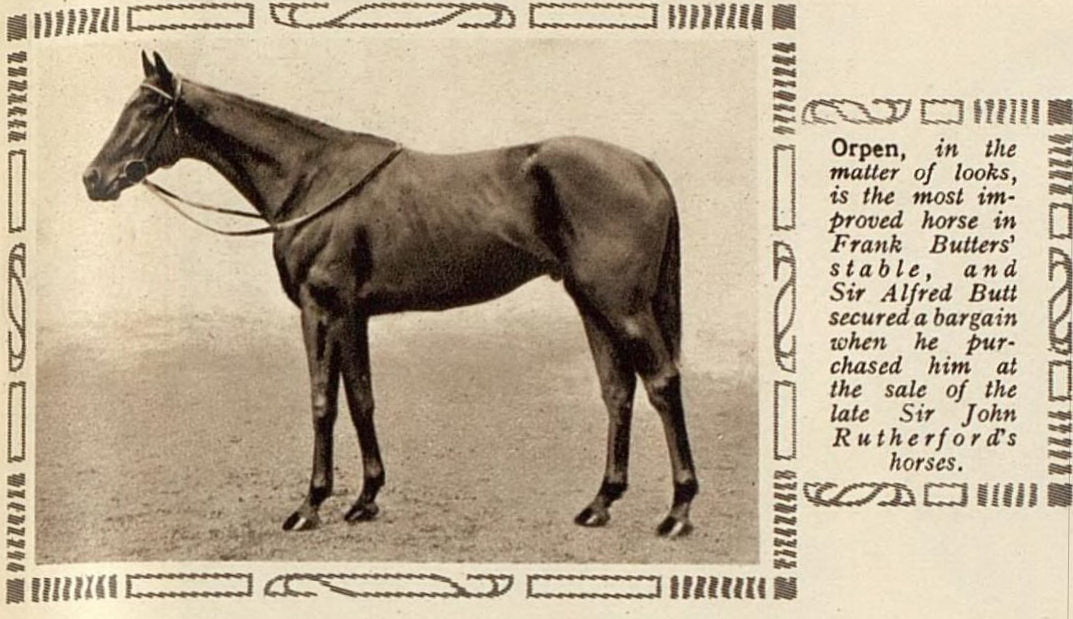 The text reads: – Orpen, in the matter of looks, is the most im­proved horse in Frank Butters’ stable, and Sir Alfred Butt secured a bargain when he pur­chased him at the sale of the late Sir John Rutherford’s horses.

As an amateur jockey he won the Grand Steeple-Chase de Paris on Parasang in 1888. After a fall at Sandown Park Racecourse in 1892 he decided to take up training and in 1893 he was appointed trainer to the Frederick Arthur Stanley, 16th Earl of Derby (1841-1908) at Bedford Lodge stables in Newmarket, Suffolk. He trained Canterbury Pilgrim to win the 1896 Epsom Oaks for Lord Derby and the 1906 Epsom Oaks with Keystone II.

Lord Derby died in 1908 and was succeeded by his son, Edward George Villiers Stanley, 17th Earl of Derby. George Lambton trained the winners of ten British Classic Races for the Earl including The Derby with Sansovino in 1924 and Hyperion in 1933. He also trained the 1,000 Guineas winner Diadem for Lord d’Abernon in 1917.

In 1926 Lambton was replaced by Frank Joseph Arthur Butters (1878-1958) as Lord Derby’s trainer but remained as his racing manager and resumed training for the Earl in 1931. In 1933 however, he was finally replaced by Colledge Leader (1883-1938). He became a public trainer and remained one until his retirement in 1945, dying a few days later on 23 July.

Lambton was the author of Men and Horses I Have Known, 1924. He lived at Mesnil Warren (a house extended for him by Sir Edwin Lutyens in 1925), Newmarket.

At Brook Stud, Cheveley, Newmarket. Orpen will serve approved mares at 198 Sovereigns and 1 guinea for the groom. 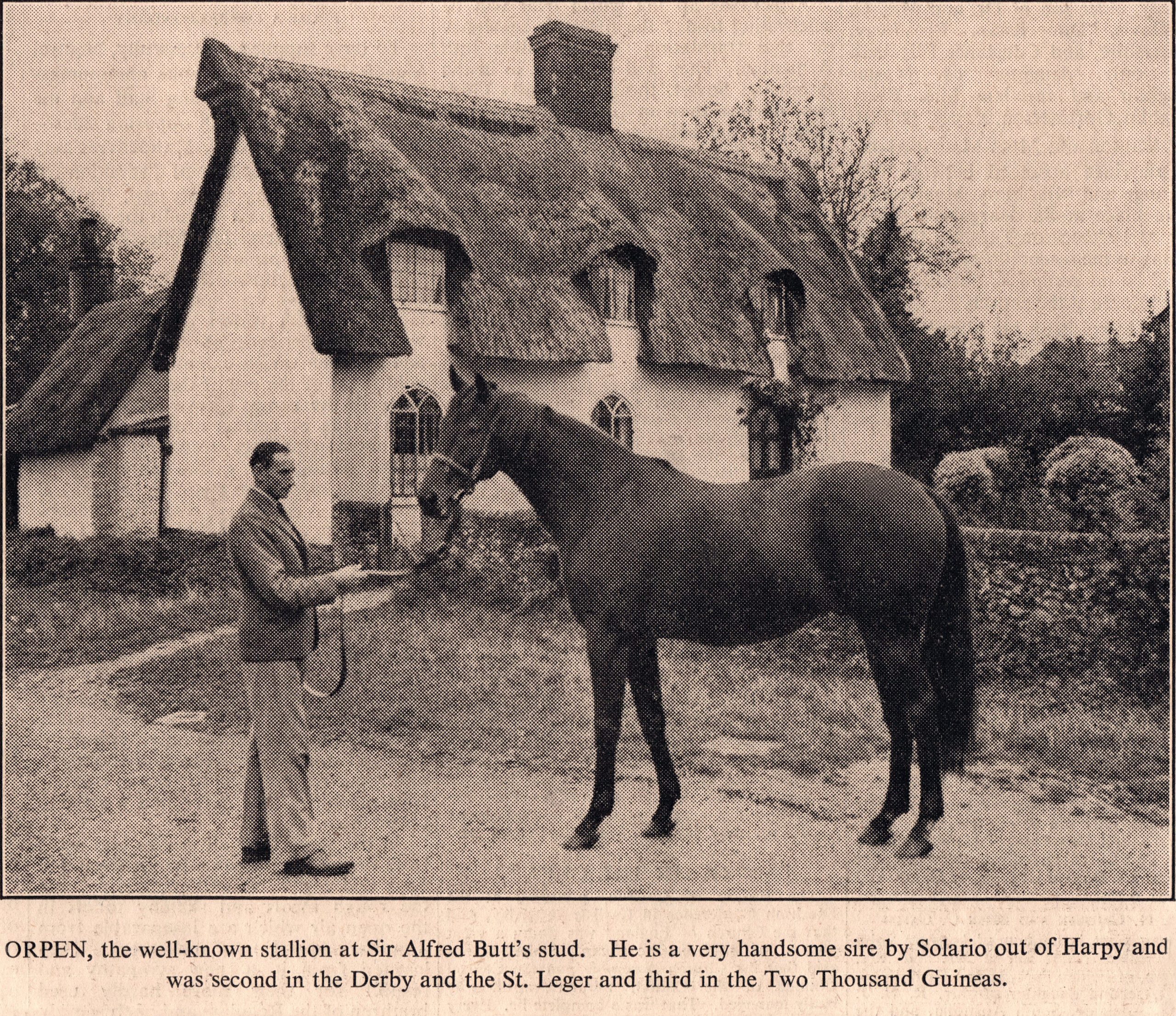 Text reads: – Orpen, the well-known stallion at Sir Alfred Butt’s stud. He is a very handsome sire by Solario out of Harpy and was second in the Derby and the St. Ledger and third in the Two Thousand Guineas. 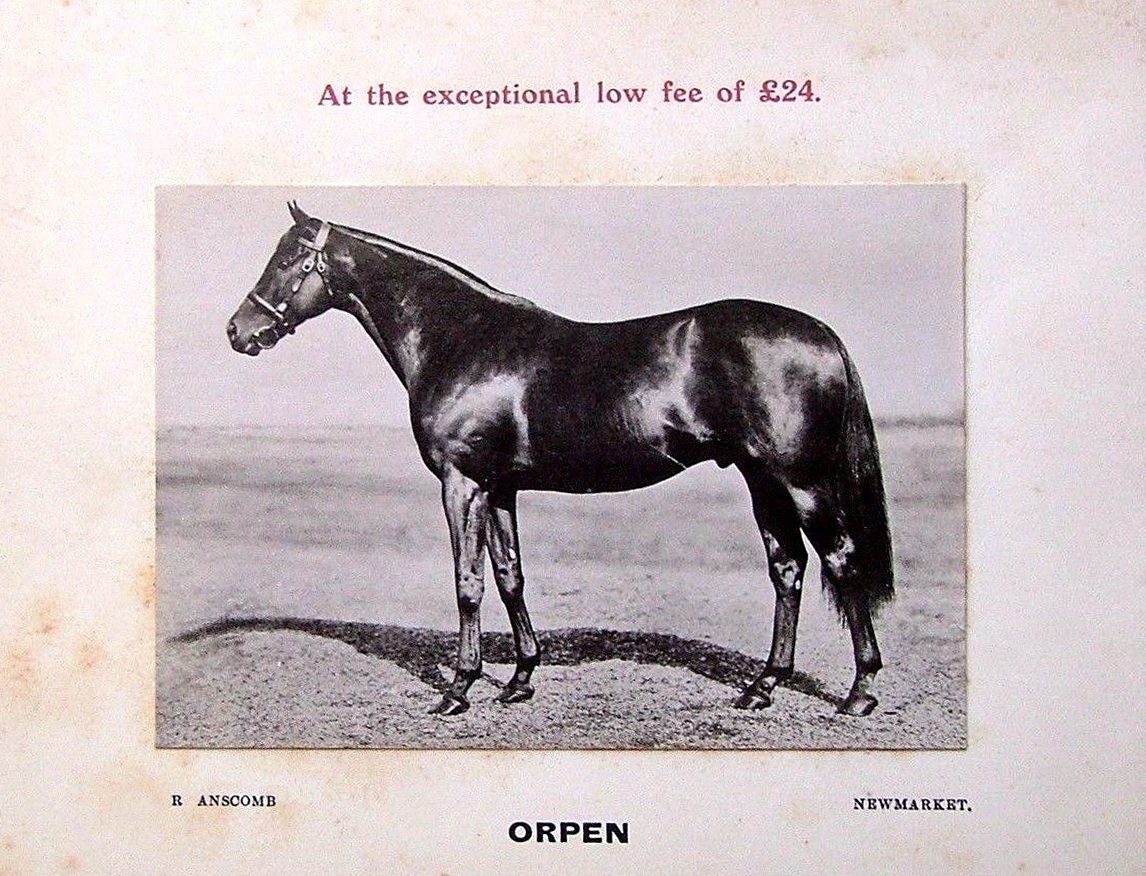 The Honourable George Lambton (1860-1945) was born in London on 23 December 1860, the fifth son of George Lambton, 2nd Earl of Durham and his wife, Beatrix, daughter of James Hamilton, 1st Duke of Abercorn. He was educated at Winchester, Brighton and Eton, and admitted to Trinity College, Cambridge on 11 June 1879. His entry in Alumni Cantabrigienses states “At Eton he was rather too near Ascot, and at Cambridge rather too near Newmarket.” He became a second lieutenant in the 2nd Derbyshire Militia in 1880, then a lieutenant in the 3rd Battalion Sherwood Foresters. 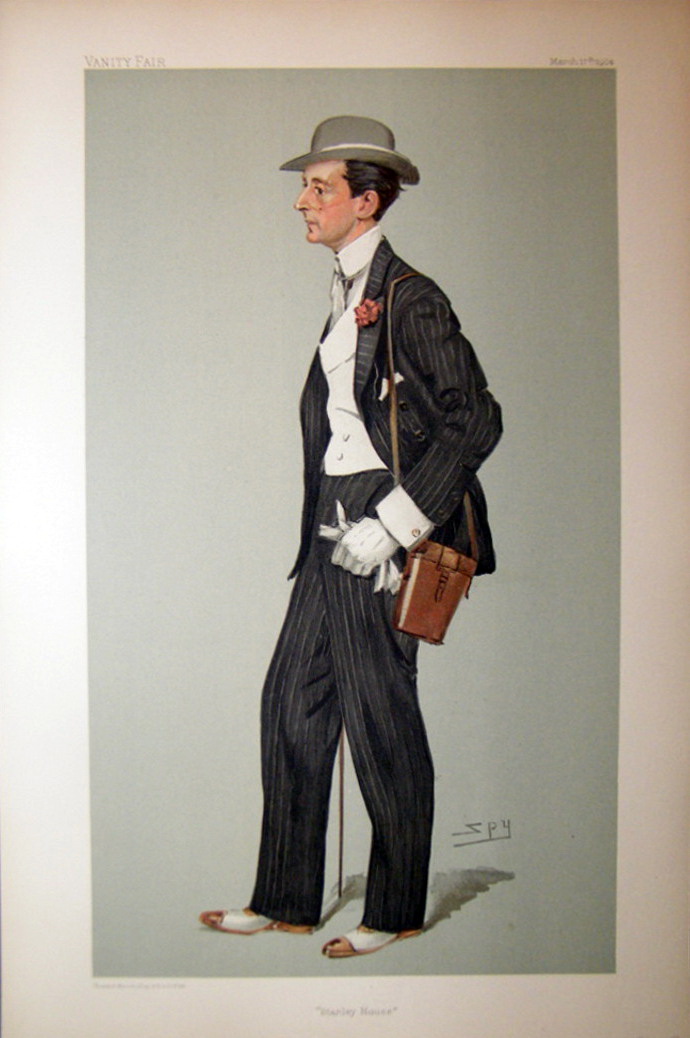 Lambton was the author of Men and Horses I Have Known, 1924. He lived at Mesnil Warren, Newmarket (a house extended for him by Sir Edwin Lutyens in 1925). George Lambton Avenue and George Lambton Playing Fields and Pavilion, both in the town of Newmarket, Suffolk, UK. are named for him.

Of Scottish descent, Sir John was born in John Street, Blackburn, on September 16th, 1854. His father, a native of Rigg, near Gretna, set up as a draper, and after traveling with a pack for many years, entered into partnership with Henry Shaw at Salford Brewery.

Sir John was educated at Lower Bank Academy in Dukes Brow, from which local seminary he passed by way of Annan
Academy and Lancaster Grammar School to Glasgow University. In 1878, on his father’s death, he took over the management of the brewery, also succeeding to his father’s estate in Annan. In 1888 he was elected mayor of Blackburn and for twenty-seven years represented Darwen in Parliament. He fought six hard elections, winning all except one when, to quote one of his ardent supporters, “he went in for a short rest cure,” necessitated by his defeat at the hands of F. G. Hindle.

In 1895 boisterous scenes occurred at Darwen on the polling day and it is on record that, in touring the town afterwards, the newly-elected Member met with a particularly hostile reception in the Stoney Flatts district, a hotbed of Irish Radicalism. Here he was struck on the face and hands by stones, whilst a stick was thrown at a member of the fair sex who was occupying the carriage.

The “Book of Memory,” now in the entrance of the Town Hall at Blackburn, owes its existence to Sir John, who at the opening of the War memorial wing of the Infirmary suggested its preparation.

It was as owner of the famous colt “Solario” that Sir John name became a household word on the turf, when with this brilliant three-year old he won his first classic race, the St. Leger of 1925. In the following year he declined to part with the animal for £100,000, a sum offered him by the Aga Khan. In that year the horse ran away from noted rivals in the Coronation Cup at Epsom, “defeating the lot as if they were mere platers.”

A wonderfully realistic painting of “Solario” by Alfred Munnings, R.A., with Joe Childs in the saddle and the beautiful Ascot race-course in the background was exhibited in the Blackburn Art Gallery in 1929, together with a portrait of the owner in oils by Sir William Orpen. 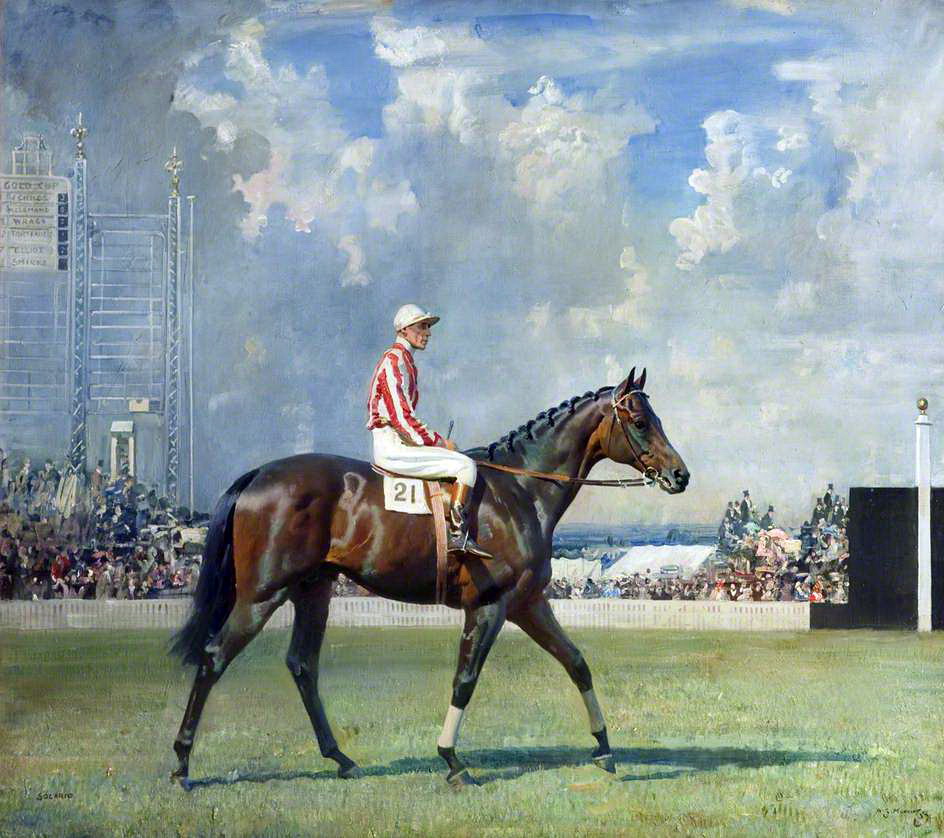 A keen sportsman in his youth, Sir John was a playing member of the early Rovers Football Club, as well as a successful sprinter.

“I was almost as bald then as I am now (he once said) and at one meeting it was amusing to hear the spectators, as I carried off the prizes in a number of events, shout, ‘ Why, the old chap’s won again.’” 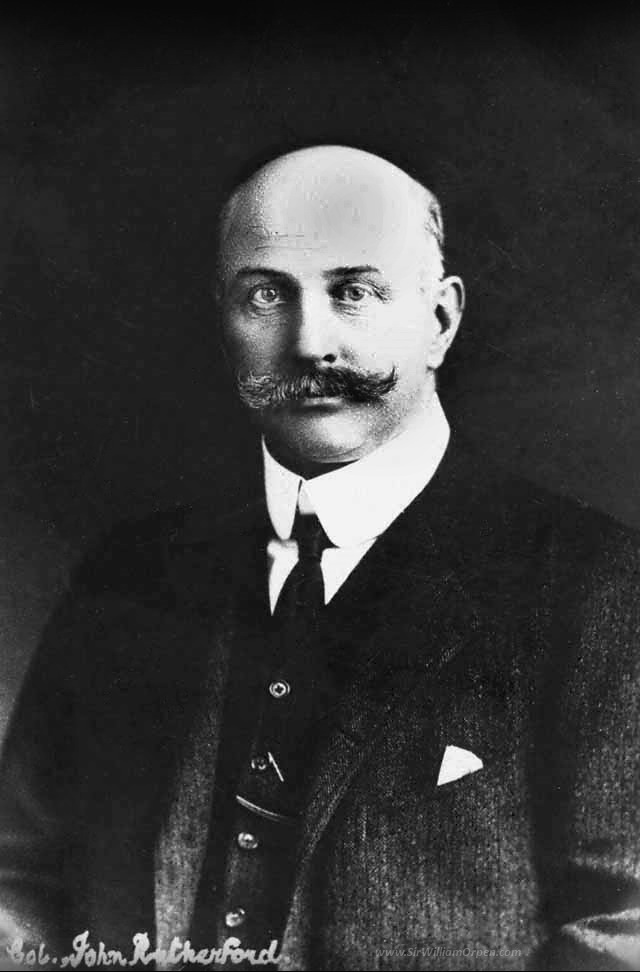 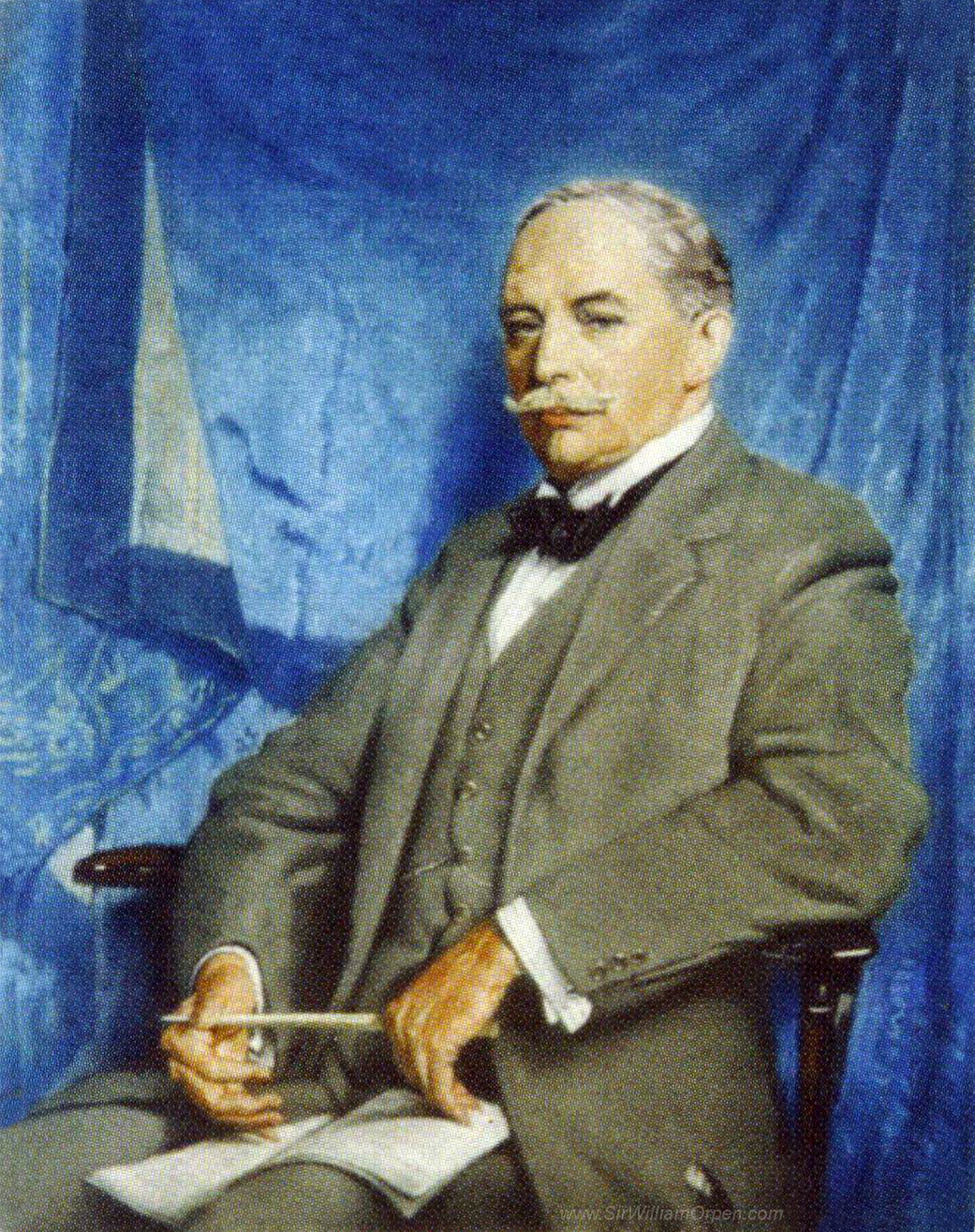 Dewer was the elder son of the founder of Dewar’s Scotch Whisky.