Hankey served in the British Army with the Artists’ Rifles from 1915 to 1918.

Notes: An impromptu sketch at a dinner party, drawn on the reverse of a dinner menu.
William Lee Hankey (1869–1952) R.W.S., R.I., R.O.I., R.E., N.S. was a British painter and book illustrator. He specialised in landscapes, character studies and portraits of pastoral life, particularly in studies of mothers with young children. Hankey’s black and white and coloured etchings of the people of Étaples, gained him a reputation as ‘one of the most gifted of the figurative print-makers working in original dry-point during the first thirty years of the 20th century’. 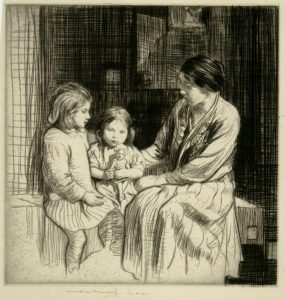 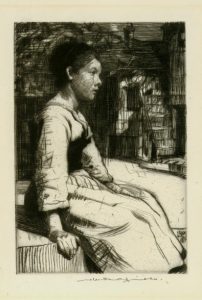 Two works by William Lee Hankey – Annette and The Birthday, (not in the auction).

Notes: The present drawing is one of a group of highly finished works, describing Orpen’s idyllic summers between 1909 and 1913 when he and his family rented the Bellinghams’ house on Howth Head. The drawings were augmented by major oil paintings. In themselves however, they were so fine that six were selected by the artist for reproduction in facsimile by Charles Chenil and Co. in a set of ten published in a special portfolio at the end of 1913. Such was their quality that one reviewer felt compelled to point out that Orpen’s drawings ‘ … are not incomplete studies, and they are not sketches’. One or two figures may appear in similar poses in paintings, but they are ‘none the less complete in themselves’. (1) On the Cliff was the first of the set.
While paintings and other drawings show figure groups on the cliff overlooking Dublin Bay, the present example, closely related in subject matter to The Yacht Race (Private Collection) is unique. Approaching the perilous cliff edge the watcher lies on her stomach to observe the passing ships and survey the majestic sweep of the Dublin mountains to the south of the city. On this warm day, she goes barefoot and her large felt hat, seen elsewhere in the series and a favourite of the painter, protects her from the sun. Comparison with the mood of dolce far niente found in the works of Augustus John and others of the New English Art Club circle, are apposite. By the time the portfolio appeared the impact of Orpen’s Howth Head lotus eaters was already being felt by lesser artists such as Derwent Lees, Walter Bayes, Charles Sims and Gerald Moira, all of whom painted pictures of girls by the sea in full sunlight, in a late flowering of British Impressionism. Perhaps the closest comparison is that of Laura Knight who met Orpen in 1910 and whose choice of subject matter in works such as Wind and Sun (Private Collection) was deeply influenced by him.
However, none of his contemporaries attained the unmistakable ‘Ingrism’ of the present drawing and others in the group. Several critics alluded to the Master of Montauban and one, reviewing the Chenil drawings, concluded,
“We pay them no fulsome compliment in saying that in their mastery of line and contour and mass they are examples of draughtsmanship of which any school or nationality of artists might be proud”.

(2) Even John appears undisciplined in comparison. In Orpen’s accurate eye there is both weight and lightness. Arms, elbows and the folds of the model’s jacket are emphasised to give solidity to the figure, while the ever-sensitive line attains its greatest refinement as it follows the contour of her back – such that for one delirious reviewer, ‘his pencil hovers over the paper with the grace of a butterfly’.

(3) The result, for another reviewer of the series, was ‘remarkable’:
“The drawings are remarkable not only for their delicacy of handling, but for the loving care with which the pencil has revelled in the beauty of form. Mr William Orpen is thoroughly modern, yet he continues a tradition which has been handed down from the great draughtsmen of the past. His work does not suffer when placed by the side of the Old Masters.”

(4) After his death, when he and his work was memorialized, Orpen’s images of Howth took on a golden hue. For PG Konody they breathed ‘a spirit of physical well-being’. (5) Within a few years all would change utterly, and that world imbued with innocence would never be re-created – save in the imagination, and in the magic of line.

Auction results were added to this blog on 27th May 2019.